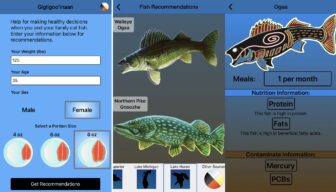 A new study has demonstrated how an advisory program designed for the Anishinaabe is a useful tool for tracking fish consumption in Great Lakes tribes.

The research collaboration among the Medical College of Wisconsin, the Inter-Tribal Council of Michigan and the Chippewa Ottawa Resource Authority in Sault Ste. Marie, Michigan is a long-term project aiming to increase environmental health literacy in Great Lakes tribal communities.

The fish consumption advisory comes as an application called “Gigiigoo’inaan,” which means “Our Fish” in Ojibwe. The app provides personalized advice regarding chemical contaminant levels in fish.

Common fish chemical contaminants include mercury and PCBs, which are a group of manufactured chemicals that can cause health problems from long-term exposure.

According to the Environmental Protection Agency, mercury levels in Great Lakes fish have been increasing since the 1990s.

There are rising concerns from scientists about increased levels of contaminants in the fish that people consume.

These concerns have led to advisories warning about the dangers of excess fish consumption of some species caught in certain locations.

However, these advisories have historically overlooked the values of Native American tribes, according to Matthew Dellinger of the Institute for Health and Society at the Medical College of Wisconsin and the primary researcher of the study.

“In the past, they have set advisories from a culturally neutral perspective,” Dellinger said. “The mathematics behind those contaminant levels effectively suggest you shouldn’t eat fish from the Great Lakes, at least not large ones in large quantities.”

“When you indicate that those species of fish are dangerous when eating and being exposed to pollutants, you’re violating a deep culture.”

According to Noel Pingatore, the director of health education and chronic disease at the Inter-tribal Council of Michigan in Sault Ste. Marie, fish are an integral part of a traditional diet for Native Americans in the Great Lakes region.

Pingatore was also an author of the fish consumption app study.

The collaborative project to develop a culturally relevant advisory software was born due to such past failures to communicate environmental health resources for the Anishinaabe.

Dellinger said the researchers used data from tribal anglers and tribal harvests to generate a new advisory that cross-referenced federal and local standards for fish consumption.

Using that data, the team of academic and tribal scientists created the software application “Gigiigoo’inaan” after multiple rounds of feedback from tribal members.

The most recent study from the project tested whether the app aided in environmental health literacy by encouraging healthy consumption of fish without exceeding the new advisory’s safety levels.

The most important result from the study, according to Dellinger, is that although participants were reporting fairly large amounts of fish consumption, most didn’t exceed the contaminant risk levels.

Dellinger said the result indicates that the advisory worked as the researchers intended.

He said participants had the impression that fish were highly dangerous to eat, but that their desire and choice to consume fish were validated by the app’s advice. Despite eating large amounts of fish, the app wasn’t advising them that they were exceeding the standards.

“Fish are often worth eating, and people seem to be getting a lot of benefits,” Dellinger said. “The app appears to encourage that.”

The app also suggests recipes for ways to prepare fish.

According to Pingatore, the way fish is prepared can affect the contaminant level when it’s eaten.

“One of the worst ways to prepare it is to leave the skin on and deep fry it,” Pingatore said, “because all the contaminants stay inside the fat.”

Pingatore said the researchers have gotten feedback indicating that people like the recipes provided by the app.

In general, Pingatore said, participants seemed to like the app. Aside from providing culturally appropriate data, its aesthetics were also designed for the Anishinaabe.

Dellinger said the researchers determined through focus groups that Ojibwe Woodland Style art was the most appealing appearance for the app.

“We found that tribal members would say they would see something that had Native American-style art on it and realize it was for them,” Dellinger said. “It was not just more trusted, but they were more drawn to it.”

The next stage of the project is to refine how usable the app is and to start exploring how the interaction between mental health and the local environment influences health outcomes.

“We’re trying to figure out what some rigorous methods might be to look at people’s health and wellness in a culturally contextualized manner,” Dellinger said. “We want to know how to define the important factors a community can control that will improve their health.”