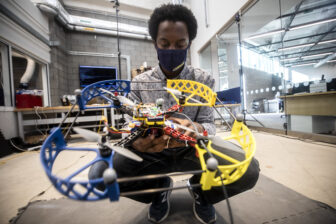 Graduate student testing out the electrification of the prototype aircraft. Credit: University of Michigan Aerospace Engineering.

An aerospace engineering team at the University of Michigan is researching hybrid-electric aircraft to dramatically reduce carbon emissions.

The U-M aviation program will follow a design similar to the way hybrid-electric cars use batteries. 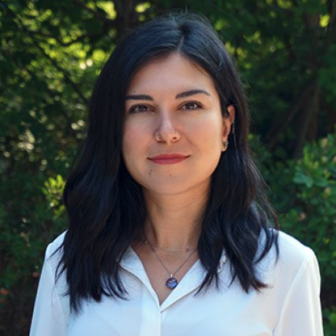 “I want to use this grant for catalyzing bigger partnerships, collaboration opportunities and research projects,” Çinar said. “So, if we succeed in this project, that’s going to hopefully open some other doors in sustainable aviation research.”

The need to lower emissions from airplanes is clear and dire, Cinar said.

Carbon dioxide is the largest component of aircraft emissions, accounting for approximately 70% of the exhaust, according to the Environmental and Energy Study Institute.

Çinar and her research team are exploring whether hybrid-electric planes can be built by  2030, she said.

The team includes graduate students who work under her as research assistants, and Raytheon Technologies Research Center, one of the industry research leaders in electrified aircrafts.

Çinar’s research is about electrified propulsion aircraft and would follow the same idea as electric and hybrid-electric cars, Çinar said. 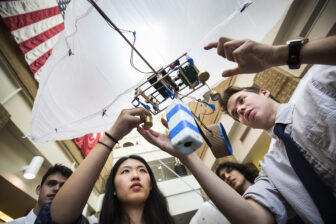 Graduate students testing out the electrification of the prototype aircraft. Credit: University of Michigan Aerospace Engineering.

A big part of creating a more sustainable aviation industry that could be applied to hybrid-electric aircraft is minimizing the drag, said Joaquim R. R. A. Martins, a U-M professor of aerospace engineering. Drag is the force that opposes an aircraft’s forward motion in flight.

Martins and Çinar are both faculty members for the U-M Sustainable Aviation research group.

Martins works with design optimization, an engineering design methodology used to make something as effective as possible. He has been working towards solutions to decrease drag through changing characteristics of the aircraft. Less drag produced by the aircraft means less carbon emissions.

He is researching ways to change the shape of the wing and to make aircrafts lighter. Minimizing drag and lowering the fuel needed to move it decreases the weight of the aircraft.

“You need to figure out that relationship and then do a trade between drag and fuel,” said Martins. “So, minimizing the amount of fuel needed to fly a certain distance, … that’s sustainability right there.”

They are 50 times heavier than one pound of jet fuel for the same level of energy.

“We want our systems, our aircrafts, to be as light as possible, but with batteries being so heavy, it’s giving us a serious challenge,” Çinar said

There are a lot of unknowns about electrification and that the industry is still in the exploration stages, she said.

Her research focuses on integrating what she describes as “radical propulsion systems,” or electric power sources, into the industry.  The goal is to spur academic and electrical industry research  to help understand the dynamics of the complex system.

Çinar said that her research and the team are going to work towards finding solutions to aviation sustainability, and that she hopes that it can educate the next generation of engineers.