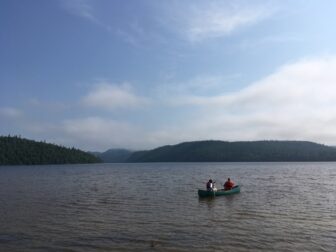 A pair of Anishinaabe First Nations members canoe on Mountain Lake — an activity among many taking place in the land camps. Image: Elana Nightingale/Western University

Many Indigenous people struggle with access to adequate and culturally appropriate mental health services, but a concept known as environmental repossession — or reclaiming of land — may be crucial to both improving mental health and restoring relationships within the community, according to a recent study.

In the Biigtigong Nishnaabeg Territory, the Anishinaabe community consists of 500 on-reserve members. The Trans Canada Highway and Canadian National Railway cut through traditional Anishinaabe territory that spans Canada and the United States — making traditional routes and ceremonial sites inaccessible, according to Chantelle Richmond, a researcher at the Indigenous Health Lab at Western University in London, Ontario.

“Thirty kilometers (18.6 miles) from our community site, it’s not pretty,” said Richmond, a co-author of the study published in the journal Health and Place.

“The federal and provincial governments have allowed a lot of industry in, and that has considerably changed the way the land looks.

“Some of our waters have been contaminated. They’ve been used for logging,” Richmond said. “This changes the way that we understand our natural systems and the ways that we can actually act in natural ways as protectors of the land.”

At one time, Mountain Lake was central to the community, but land dispossession carried out under the Indian Act has severed people’s relationships to their First Nation identities, according to Richmond.

Enacted in 1847, the law granted the government power to manage the newly acquired territory and assimilate First Nations people by regulating what traditions they took part in.

In 2019, the Anishinabe Tribe began formal negotiations with the Ontario and federal governments regarding their legal rights to the land, according to the Ontario government.

A 2004 study in the American Journal of Community Psychology found that 18% of Indigenous adults had daily thoughts regarding the loss of land, and one-third thought about the loss of tradition and respect for elders on a daily basis.

But since the 1980s, Anishinaabe leadership within the Biigtigong Nishnaabeg Territory have been organizing all-day “land camps” at Mountain Lake, which is about 200 kilometers (124 miles) north of Toronto.

It is an opportunity for elders to pass on tradition and knowledge to younger generations through interacting with the natural environment, Richmond said.

Given a history of disparities in health care treatment, Richmond and Ph.D. student Elena Nightingale wanted to see if sending a mix of generations into the “bush” would help alleviate the intergenerational trauma and improve mental wellness. Nightingale is the study’s lead author.

Suicide and self-inflicted injuries are the leading causes of death for Indigenous youths and adults up to the age of 44 in Canada, according to Cultural Survival Quarterly magazine.

For Indigenous men, the suicide rate is five times higher than the general male population.

According to Richmond, for too long, First Nations people have been left out of the conversation when it comes to treating their mental health.

Activities at camp like making rag moccasins, retelling stories, boating and sharing meals led to a growth in confidence on the reserve and also improved relationships between the elders and youth.

A 2015 study from the University of Nebraska Lincoln found that a key missing link in preventing drug use by Native youth was the quality time spent with parents and family.

On Manitoulin Island, 475 kilometers away (295 miles), students of Wikwemikong Junior High learn the typical subjects of math, writing and reading, but once a week they are guided by their land-based instructor in learning Wikwemikong tradition.

Matthew Oshkabewisens is part of a team of three instructors. He works with each age group for about an hour and a half once a week — engaging in outdoors activities like skinning deer.

“It’s something that a lot of these kids weren’t raised with,” Oshkabewisens said. “I don’t have much worry about any kid not learning something here.”

According to Oshkabewisens, engaging with nature is not only of benefit to Indigenous youth, but for all youth in general. It stimulates their minds in a way that a computer screen cannot.

And according to Richmond, it may make people more connected to each other too.

“When you lose your sense of place in the world and you’re not really sure about direction because you’re not integrated within the community, something structured, like a meal, a gathering or the creation of Mountain Lake is really beneficial. The whole point is to bring people together, and I don’t really think it mattered what people did together.

“Putting young and old people on a bus together and sending them out into the wilderness will push people to have conversations,” she said. “I think we’ve kind of lost our natural abilities to do that, and this was a really good way to connect people.”