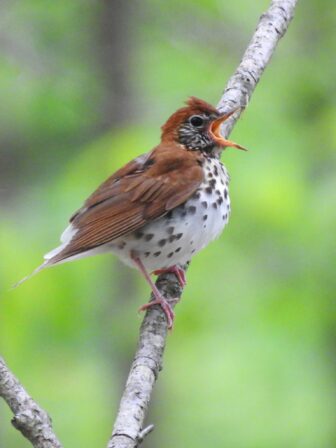 Do you ever wonder how the warbler in your backyard seemingly appears in South America all of a sudden?

That’s because most birds migrate at night, according to Benjamin Van Doren, a postdoctoral associate at the Cornell Lab of Ornithology in Ithaca, New York.

During the fall migration season, over 4 billion birds in North America pass over our heads while we are sound asleep.

Therefore scientists, like Van Doren, need to turn to other technologies to understand the stream of birds overhead, including the white-throated sparrow, the common yellowthroat and the black-throated blue warbler.

Ornithologists in the United States commonly use the weather surveillance radar network, scattered across the country, to pick up birds.

Just as meteorologists use radar to forecast weather, radar is used the same way to detect bird migratory patterns.

According to Van Doren, “If we can access the original data before any filter has been applied, we can do the opposite: remove the rain, remove the snow and keep the birds, and then use that to understand where, when and how migration has been occurring.”

Digital maps that show real-time bird migration across the U.S. are a highlighted feature of the website.

“We have live data from the weather radars, which have then been translated into numbers of birds which can be explored throughout the country. It’s a really exciting window into migration,” said Van Doren.

While radar provides data to look at millions of birds at once, one thing it can’t do is indicate which species of birds are moving, according to Van Doren.

“One of the only ways we can understand which species are moving at night is to record their vocalizations,” said Van Doren.

Through acoustic technology, ornithologists can record bird vocalizations called “flight calls” as they pass through the night.

For example, the radar can differentiate between a gray-cheeked thrush, which sounds like a delicate flute-like whistle, from a green heron, which sounds more like an explosive “skeow” call.

The process is done by sticking microphones into the night sky and recording the vocalizations, according to Van Doren.

Learning how to integrate radar and acoustics is an ongoing process for ornithologists like Van Doren.

His recent work involves “developing methods for better automated processing of acoustic data so we can have a computer process audio that tells us how many birds of which species flew over the microphone.”

“I envision in the near future, with this technology that we’re working on, it will facilitate a large-scale network of microphones that people or scientists can have in their backyards,” Van Doren said “we will be able to monitor the birds migrating overhead with species and local resolution that haven’t been achieved before.”

Despite the mere idea of knowing that 4 billion birds fly across the country at night, radar and acoustics bring much more to the table for ornithologists.

According to Andrew Farnsworth, a senior research associate at the Cornell Lab of Ornithology, there are a few main reasons radar is important to studying bird migration.

“The network of radar used in the U.S. collects data in a repeatable way so you know what you’re getting over large geographical areas,” said Farnsworth.

According to Farnsworth, another important reason is that “an enormous amount of migration happens at night. There are no other means to capture the magnitude of that movement other than radar.”

In the U.S., migration radar data is publicly available because it is a federally funded network of the National Oceanic Atmospheric Administration’s National Weather Service.

“This opens up potential for this data set to look at patterns and think about conservation, natural history, climate change, habitat change and all sorts of interesting questions,” said Farnsworth.

Calculating how many birds migrate across the country per year allows ornithologists to communicate with the public about this critical phenomena that integrates ecosystems across the hemisphere and intersects with human activity.

“It’s a fulcrum for understanding quite a lot about our systems from the ecological perspective and how human activities impact them are all connected,” Farnsworth said.

For example, over the past few decades the population of wood thrushes that breed in Michigan and spend their winters in Central America has severely declined, according to Van Doren.

By understanding that, ornithologists can take a closer look at what’s going on in the wintering grounds – deforestation.

Another common challenge for migratory birds is light pollution.

In both urban and rural settings, Farnsworth said, it attracts them and brings them into hazardous situations – colliding with things at night.

In fact, collision is the second-largest cause of death for birds, according to Farnsworth.

One large source of light distraction for migratory birds such as the American red star is the Tribute in Light Tower in New York City.

Farnsworth has had the opportunity to work with members of the Tribute to Light Tower to find a solution to minimize bird collisions while still memorializing victims from the 9/11 terrorist attacks.

These migrants contend with many challenges, and being able to track and monitor bird migration with acoustics and radar gives ornithologists like Van Doren and Farnsworth a better understanding of how they do it and how ornithologists can help.

Besides working on the bird migration explorer – a new digital platform that comprises interactive maps of over 450 migratory bird species that breed in the U.S. and Canada. Deppe also works on conservation applications and engagement of the MBI.

Deppe and her team are working to connect people who engage, interact and advocate for the betterment of birds with Audubon’s 450 chapters spread throughout the country.

“The explorer is meant to be a resource that chapters can use to tell stories and to understand better where their migratory birds go and what actions can help them,” said Deppe.

Having access to technology like the explorer allows birders, conservationists, the general public and others to think about their role in the community and how their actions affect migratory birds.

“In my lifetime I have been seeing a quarter less birds than I used to,” said Deppe. “We have lost 3 billion birds since the 1970’s and that is equivalent to one out of four birds.”

Birds are beneficial to humans by eating insects that attack crops, providing financial revenue and being enjoyable to watch.

Contrary to the devastating loss of bird populations, people have come together to turn around a declining population of waterfowls, according to Deppe.

“People got together, they coordinated to make sure that waterfowl – ducks, geese and swans – had wetlands and good habitat across their entire migratory route,” she said.

“When we all come together, we all do something small, we can make sure birds have what they need,” she said.