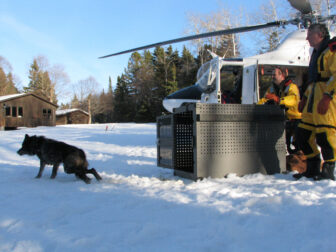 The wolf known as 016M is released on Isle Royale in March 2019 after being transported from Ontario. Image: National Park Service

For the first time, scientists have documented an adult wolf killing red fox kits in their den.

The event occurred in Isle Royale National Park, where researchers found evidence that an adult male wolf known as 016M attacked the kits, killing and possibly feeding on at least two of them – and possibly also killing a third littermate.

The kits had been denning in the hollow trunk of a northern white cedar, according to a newly published study in the journal “Northeastern Naturalist.”

The attacker had been captured by helicopter in Wawa, Ontario, in March 2019 and moved to Isle Royale as part of a National Park Service program to rebuild the island’s nearly extinguished wolf population, which had dropped to only two adults.

The wolf received ear tags and was fitted with a GPS collar before his release near Windigo on the southwest end of the island.

The attack occurred about two months later, the study said.

Red foxes have lived on Isle Royale in Lake Superior since 1925. Wolves first arrived there in the late 1940s.

Scientists from Isle Royale National Park, the Global Wildlife Conservation Center at the State University of New York, the U.S. Geological Survey and the Ontario Ministry of Natural Resources and Forestry did the research.

Wolves and foxes generally don’t compete for prey, according to wildlife biologist Mark Romanski, a natural resources program manager at the national park and a coauthor of the study.

Wolves are the apex predators on Isle Royale and usually don’t kill foxes, especially when food for both species is abundant, the study said.

Isle Royale wolves feed primarily on moose and beaver. The diet of red foxes includes small mammals, fruit and birds, although they do scavenge on wolf-killed carcasses.

“Food scarcity for wolves following translocation seems unlikely, given that moose and American beaver densities were at or near the highest recorded,” the study said.

Nobody knows the actual reason for the rare attack.

“This wolf spent six days at the den site and invested a non-trivial amount of energy excavating the den and killing the kits,” they wrote.

As for why it did so, the scientists offered this theory: Its recent translocation, single status of not belonging to a pack, limited knowledge of local food resources and the risk of injury from attacking adult moose could have created “pseudo-food limitation effects.”

The researchers found the attack site by using the wolf’s GPS tracker.

They discovered proof that the wolf attacked the two partially eaten carcasses.

The intact carcass of the third kit had multiple puncture wounds in its abdomen that were “consistent with a large carnivore” but couldn’t be definitively blamed on the wolf, they said.

The study said the wolf may have partially consumed two of the kits, and scavengers could have further eaten the carcasses.

Given that most red fox litters have three to six kits, the wolf may have eaten others, it said, although adults sometimes split their litters between two dens.

American martens, crows and European pine marten feed on red fox kits, but those species wouldn’t have been able to excavate the hollowed tree trunk to reach the den or to create the large puncture wounds found on the carcasses, according to the study.

Nineteen wolves, including 016M, were transplanted to the island from Ontario and Minnesota between September 2018 and September 2019. Isle Royale’s wolf population has grown since then to the upper 20s, not counting those born this spring, Romanski said.

The ultimate goal of the GPS tracking and related research is “to understand the ecosystem services” that wolves – the transplanted ones and their offspring – play on Isle Royale, he said.

Documenting such uncommon killings hel scientists understand the effects when a dominant competitor is reintroduced into an ecosystem, the study said.

“We hoped they would kill moose,” he said, referring to the proliferation of moose that had been devastating Isle Royale’s plant life as the number of wolves plummeted.

And, as hoped for, they have been successfully killing both moose and beaver, he said.