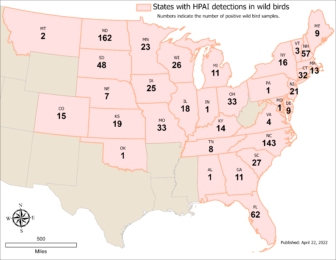 If you have backyard birds in your yard, take down your birdfeeder, said Louise Sagaert, director of Wildside Rehabilitation Center, a nonprofit organization in Eaton Rapids, Michigan.

The disease is caused by an influenza virus, said Megan Moriarty, a wildlife veterinary specialist with the Michigan Department of Natural Resources.

“We’re seeing a lot of illness and deaths in wild birds and domestic birds,” Moriarty said.

“Unfortunately, there are not very specific clinical signs, it could look like a lot of other things,” Moriarty said.

Infected birds can also not show any signs, Moriarty said.

The flu spreads through direct contact, but can also spread through indirect transmission, Moriarty said. This means if an infected bird touches a shared food or water source, a bird can get sick.

Birdfeeders are a shared food source for wild birds and no birdfeeder is safer than another, said Louise Sagaert, director of Wildside Rehabilitation Center.

“The tube feeders cause more contagious issues versus the hopper ones,” she said.

“The problem with hopper feeders is that they tend to draw more types of birds and the congregation of birds is larger than at the tube feeders,” Sagaert said.

A decreased use of birdfeeders could result in fewer birdseed sales.

Kate Furtaw, Owner of Wildbirds Unlimited in East Lansing said she hasn’t noticed a decrease in birdseed sales, but an increase in birdfeeder cleanings.

Contrary to what many people believe, stopping when you feed birds is not a hardship.

“Although it seems like birds are surviving from the birdfeeders, it’s simply a treat, and they are certainly able to survive on their own without our help,” Sagaert said.

It’s possible the flu can spread through objects like car tires or people’s boots, Moriarty said.

“You have to dedicate clothes and boots to the area where your backyard birds are,” Sagaert said. “Do not wear those things back in the house, especially if you have indoor birds.”

“You shouldn’t go from the poultry yards to the wild bird feeder,” Sagaert said.

And if you must, bathe your shoes in bleach.

More research is needed to fully understand the transmission of the bird flu, Moriarty said.

“We do know it’s likely linked to migratory bird movement, which is why we’re seeing it so much now during the spring migration,” Moriarty said. “The virus is popping up throughout the United States. In Michigan, we’re in the Mississippi flyway, and so with a lot of our neighboring states like Ohio, Minnesota and Illinois, we’re seeing a lot of cases.”

“It has the potential to impact humans, but fortunately there has been no human cases in the US from this strain of highly pathogenic influenza virus, which is good news.”

We should all be cautious because influenza viruses often have the ability to jump species barriers, Moriarty said. Mammals can catch the flu, Moriarty said.

According to the Centers for Disease Control and Prevention, the general public has a low risk of contracting the avian flu.

“It is a pretty significant outbreak we’re experiencing right now,” Moriarty said. “It’s lasting a pretty long time with no current signs of slowing down.”

With migration slowing, the hope is the spread of the flu will decrease, Moriarty said.

The best things to do to prevent the spread of the flu is by keeping your wild birds and domestic birds separate from each other and by practicing good hygiene like washing your hands frequently if you are touching birds, Moriarty said.

2 thoughts on “The bird flu: Clean your birdfeeder right now”