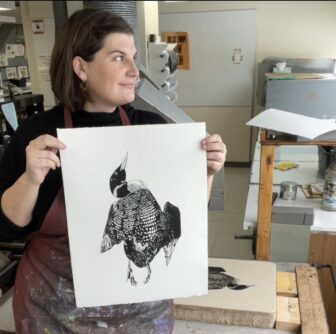 “Um yes, hello…” says a floating voice in front of an old map of the Great Lakes.

In the lower right corner, a small  “TikTok” graphic flutters near a woman’s head. Only her eyes and forehead are visible.

Geo Rutherford then launches into the story of The Atlanta, a ship that sank in 1891 and was recently discovered in Lake Superior. The printmaker and teacher at the University of Wisconsin-Milwaukee has 1.3 million followers on TikTok, where she goes by @geodesaurus.

The self-described Great Lakes enthusiast built that following—the same number that the Washington Post has—by making educational TikTok videos about the Great Lakes and other lakes around the world.

“I’m a giant hoax, I’m just a limnology hobbyist,” she joked. “There’s power in somebody who is not educated and just excited about learning things they know nothing about.”

Rutherford doesn’t have a formal education in limnology, the study of lakes and freshwater. But she does have a master’s of fine arts degree and often features her art in her videos.

“I tell people this jokingly, I built a platform on science so I can post my art videos and have them do better,” she said.

Rutherford got into art while attending high school in Dexter, Michigan. But she has “science in her blood.” She was nicknamed Geo after her mom’s specialty, geology, as an educator at Eastern Michigan University, where Rutherford got her undergraduate degree. After a stint teaching high school art in Chelsea, Michigan, she moved to Wisconsin about three years ago to be closer to her parents and pursue her master’s degree at the University of Wisconsin-Milwaukee.

TikTok saw massive growth in the spring of 2020 after the COVID-19 pandemic reached the U.S. and people began working and studying from home. By the summer of 2020, TikTok reported an 800% growth in monthly users since Jan. 2018.

Rutherford began making videos during quarantine while she spent her last year of graduate school living with her parents.

“That time on TikTok was a really interesting time because everybody kind of turned to the app for a sense of community,” she said. “I didn’t have the relationship with the app that I do now.”

She first downloaded TikTok in 2019.

“As a high school teacher, I liked to know what the kids were into, even though I was slowly growing out of them,” she said. “I was so overwhelmed by it that I deleted it.”

Despite that first impression, she gave the app another try and posted her first viral TikTok in July 2020.

“I think I started making videos on it because I loved the opportunity to tell a story in a minute,” Rutherford said. That video showed some of what Rutherford fondly calls “beach finds” for one of her artist’s books – art inspired by the form or function of a book.

She can’t give much advice on how to do a TikTok, she said. “I can’t tell you because I think I’m an outlier. I know why it went viral in retrospect. I said, ‘This is an artist’s book’ and it was a box full of tubes.”

The box of tubes, each filled with Great Lakes debris like plastic, stones or even butterflies that washed ashore, got 1.5 million views. Soon, she began making science videos.

Why did she adopt, “Um yes, hello…” as a signature greeting?

“If you’ve seen my content before and like it, then it’s encouraging you to stay,” she said. “It can be annoying if you scroll through my videos really fast, but it does work and people respond positively to it.”

“I’m writing a Spooky Lakes book for middle school aged kids,” she said. The proposal for the book, which Rutherford is also illustrating, will go out to publishers this summer.

“I painted this mummified bat that was so satisfying,” she said. “I’ve been surprised at how much I’ve enjoyed it. I find a lot of enjoyment from the process of writing a book.”

The book isn’t her first paid gig as a creator. While she doesn’t typically make promotional videos, Rutherford has made over $7,000 on TikTok collaborating with companies like Netflix. She’s also made around $50,000 selling artwork because of the platform. And she recently began selling merchandise.

“I’m an environmentalist and a minimalist and also a seller of goods,” she said. “There’s an irony to that that I can’t escape.”

Her prints showcase her beach finds, as diverse as feathers, tampons and neglected doll heads.

Each video begins as an idea. Then comes research and scripting. Next, she collects images and videos and stacks them together using Instagram. Then she records, adds captions and posts. The entire process takes five-to-seven hours.

One about the Congo River she thought about for months, doing research in the middle of the night.

“I love taking a big topic and suctioning it into a summary,” she said.

Raised by “weird traveling people,” Rutherford visited over 30 countries by the time she reached adulthood. Now, despite making videos about attractions around the world, Rutherford tries to minimize her environmental footprint by finding adventure close to home, like when she road-tripped to all of the Great Lakes.

“I feel like I’ve already done my traveling in some way,” the former globetrotter said. Still, there are exceptions.

“I would go to Lake Baikal in a heartbeat,” she said. “My dad, in the 1970s, built bridges in the Himalayas that are still used everyday by people and I want to hike his path with him before he can’t do that anymore.”

Many of her followers are from the Midwest, but not all.

The newfound notoriety isn’t always positive. Body-shaming and comments about her voice have discouraged her from posting personal videos.

“I also get sick of the TikTok opinion,” she said. “I just get sick of everybody’s opinion all the time.”

Her success on the app has derailed her life plan to teach high school, a job that was all-consuming, but “the best gig in the whole word,” she said.

“If TikTok were to disappear tomorrow, I would go back to teaching high school and it would be a long-term joke in my family that Geo was TikTok famous once and that would be okay,” she said.

Still, she hopes TikTok doesn’t disappear tomorrow, taking her videos with it. In the coming year, she plans to work on her book and continue making videos.

“Now I’m kind of intoxicated by the other choices you can make in life, like being an artist or being a book illustrator or writing books by yourself,” she said.