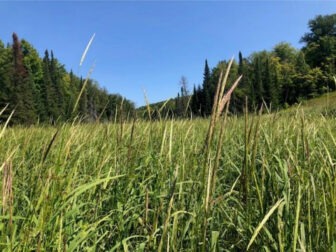 Dangerous metals such as arsenic and mercury have been found in wild rice beds located on the Keweenaw Bay Indian Community reservation and surrounding areas, according to research from Michigan Technological University scientists and their associates.

The contamination is a toxic legacy of copper mining in the Western Upper Peninsula of Michigan.

Samples of sediment, water and rice were taken from L’Anse Bay, located on the reservation, and Lake Plumbago, a nearby inland lake in Baraga County.

According to the study, published in the journal “Applied Sciences,” the “uptake of toxic metals by aquatic plants and algae poses a major risk to ecological and human health.”

Wild rice, known as manoomin in the Ojibwe language, is a semi-aquatic wetlands grass that is abundant in the Great Lakes region and is an important food source for the Keweenaw Bay Indian Community and wildlife and migratory waterfowl. It is also considered a sacred plant to the Anishinaabe tribes in Michigan.

Beyond the cultural significance of wild rice, it’s an important part of the food web in the area, said Scott Herron, a biology professor at Ferris State University.

“All the other parts of the ecosystem depend upon the calories, energy and, thus, food that wild rice provides to insects, birds, waterfowl, fish and later to their predators,” Herron said.

Heavy metals migrate to the grain of the rice and can be consumed by the species ingesting it, Herron said.

Arsenic was found to have the highest presence in wild rice seed samples from both locations, the study said.

Exposure to arsenic through diet can result in a higher risk of cancer, as well as liver and kidney disorders, according to the study.

Erin Johnston, a wildlife biologist with the Keweenaw Bay Indian Community, said that, fortunately, wild rice in the two test areas has not been ready yet to harvest for human consumption since efforts began to restore it there.

The study attributed the contamination to the dumping of millions of tons of stamp sand from mining operations into the lakes during the copper boom of the early 1900s. Stamp sand is coarse sandlike material resulting from the waste created by the mining industry.

“There are a lot of areas throughout this region that are still dealing with legacy mining,” said Johnston. “There were no environmental regulations at that time to hold anyone accountable for the negative environmental impacts.”

“They would take out the portion of the ore they could use, in this case copper, and everything else was considered waste rock and crushed really finely,” she said.

High levels of heavy metals such as copper, aluminum and others were found in the wild rice tested by the researchers.

“For decades, the tribe has been studying this area to better understand the stamp sands, how they’re moving along the shore and other potential impacts they’re having on the landscape,” said Johnston.

In 2006, the tribe worked to put down a 6- to 10-inch soil cap in an attempt to keep the stamp sands from moving along the L’Anse Bay lakeshore.

“We continue to battle every year the issue of the stamp sand moving because it’s located next to Lake Superior and you can’t control the weather,” said Johnston.

Researchers say it is the first such study on an inland lake where wild rice restoration is underway.

Johnston said there was some earlier indication that 19-acre Lake Plumbago had elevated levels of heavy metals, but not to the extent found in the new research.

“Of course, that is, you know, concerning and something we definitely need to look into further,” she said.

Roger LaBine of Trout Creek has had a lifelong relationship with wild rice, whether it was working to harvest it back in 1972 or to restore it to the U.P. today.

“I harvested with my family, my grandparents and my uncle,” he said. “But we had to go to northern Wisconsin to harvest wild rice because the bed on our traditional waters, and where our village was, was destroyed.”

LaBine is a member of the Lac Vieux Desert Band of Lake Superior Chippewa Indians, whose reservation is in Gogebic County, about an hour south of the Keweenaw Bay Indian Community reservation.

LaBine said wild rice is so important to the tribes in the region – the Ojibwe, Potawatomi and Odawa – because it was a staple in sustaining life in the area.

“The Three Fires people believe this was a sacred gift sent by the Creator and placed in the Great Lakes Basin,” he said.

This cultural significance is why tribes throughout the state are working to bring wild rice back to its natural habitats.

“I would not want it to be a commercial crop because then you start getting into that GMO and hybrid rice,” said LaBine.

“It would be good to see wild rice like it was before colonization.”