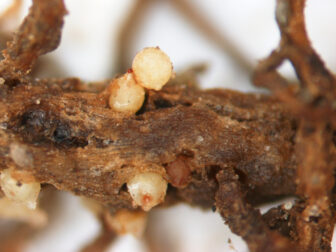 Farmers should think about proactively managing soybean cyst nematodes since they are the No. 1 pest in soybeans, said Jeremiah Mullock, the production manager of chemical company Baden Aniline and Soda Factory, or BASF.

Nematodes are roundworms that live in soil and feed on plant roots that take away resources from the plant.

Michigan soybeans were a $1.4 billion crop last year, according to the U.S. Department of Agriculture.

Managing the nematodes includes soil sampling and incorporating seed treatment and crop rotations to reduce some of those populations, according to Mullock.

Hilaree Fraly, BASF’s agronomic solutions adviser in central Michigan, said populations can grow extremely quickly, so what is a minor problem one year can become a major problem the following year if no good management practices are used.

“Soybean cyst nematodes are present in all of the major soybean-growing counties in Michigan,” Fraly said. “Since it was first detected and samples have been confirmed, its confirmation has spread across the state.

“A lot of soybean growers don’t know they are losing yield to cyst nematodes or aren’t taking the steps to manage it.”

Professor Marisol Quintanilla is an applied nematologist at Michigan State University who works with the committee and does research evaluating management strategies. “After I find out the answers, I can give information to growers through oral presentations, webinars and written publications,” she said.

Soybean and corn are huge crops in Michigan, with 2 million acres in production annually, according to Seamon. Along with the challenges of nematodes, commodity prices have increased as well.

“There’s lots of issues right now with the cost of fertilizer and availability,” Seamon said. “So a lot of farmers are working on getting prices on those products, as well as physically getting the products on their farm to get ready to plant.

Seamon said, blaming the pandemic and other factors, including rising energy and transportation system problems. “Today, the value of the bushel price of a soybean is higher now than it has been in history,” he said.

Nick Tinsley, a technical field representative for the BASF Eastern Corn Belt, said farmers may rotate between soybean and corn, depending on commodity prices.

“Increased fertilizer price for corn might mean that a grower wants to plant soybeans because it might be more profitable for them,” Tinsley said.

Despite challenges from lost yields and the higher costs of equipment, there was a national increase of 7% in soybean and corn production, according to 2021 data from the U.S Department of Agriculture’s National Agricultural Statistics Service.