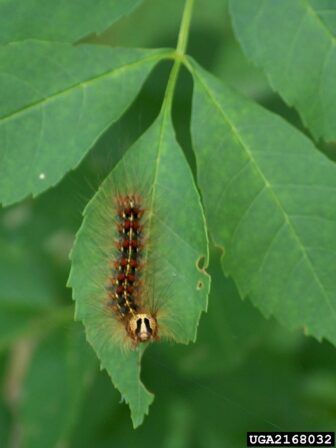 The spongy moth caterpillar was renamed after its old name was banned as an ethnic slur. Image: Haruta Ovidiu, University of Oradea, Bugwood.org

The bothersome gypsy moth will now be known as the spongy moth.

The Entomological Society of America made the change because the word “gypsy” is considered a derogatory slur against the Romani people. The word was dropped from its list of common names last July and the new name was just announced.

The name change is part of the society’s Better Common Names Project.

“With spongy moth, it’s more of an environmental harm, but we might associate that harm with the culture or the common name that it’s attributed to. So, rather than have those negative cultural connections, get rid of that baggage and go forward with a name that is much more friendly.”

The name “spongy moth” was chosen because the egg masses look like rough-textured, brown sea sponges.

“The egg mass isn’t spongy like a kitchen sponge – it just has that texture and coloration of a sea sponge,” Foreman explained. “Except normally you wouldn’t find them in the ocean. You’re going to find them on tree trunks, your decks, your lawn furniture, etc.”

The spongy moth is widespread in Michigan. The caterpillars primarily feed on oak leaves.

According to the DNR, when populations reach a nuisance level, the caterpillars are known to cover just about everything outdoors, and their round waste pellets rain down from the trees.

The department says the spongy moth has been present in Michigan since the 1950s. In the mid-1980s, the state’s first widespread outbreaks occurred.

“Today, spongy moth outbreaks are cyclical, peaking every seven to 10 years. In these years, the virus and the fungal disease spread more easily through dense populations, eventually causing a crash,” according to the DNR.

This story was produced by Interlochen Public Radio and is posted here with permission.