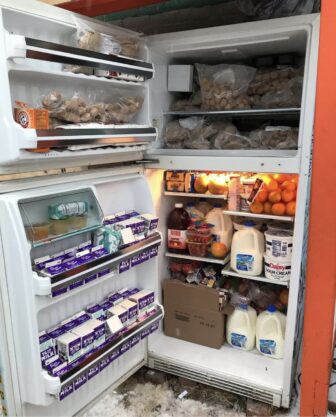 Inside one of the freshly-stocked community fridges in Detroit. Image: Detroit Community Fridge

In Great Lakes cities and elsewhere not all of the fridges that sit on the sidewalks are bound for the trash or for resale.

Some are community hubs resisting environmental damage, food insecurity and the stigma of mutual aid.

Community fridges are working fridges, usually connected to an organization, that provide free food to passersby. The concept is to take what you need and bring what you can.

“A majority of the neighborhoods in Detroit are considered food insecure by the state of Michigan,” Eicher said. “It’s pretty apparent the lack of access to food and the lack of affordable and easy transportation.”

There are now four fridges across Detroit, placed next to locations that offer other forms of aid, such as family and childcare services and free hygiene and menstrual products, Eicher said. 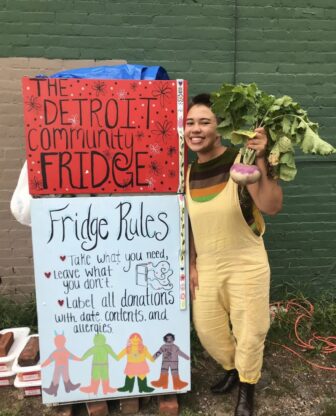 In the Great Lakes region there are community fridges in such major cities as Milwaukee, Madison, Chicago, Cleveland and Toronto.

Ernst Bertone Oehninger, founder of the Freedge Network, planted the first U.S. community fridge in 2014 as a graduate student at the University of California, Davis. Interested in combating food insecurity in the area, Oehninger said he and his friends decided to put a fridge stocked with food outside their house for community members to peruse as needed.

Early on, the fridge was shut down because such a service was not addressed in the county’s food code. But legitimate food code violations are rarely a problem for community fridges, Oehninger said.

“Nobody gives rotten food away. People who give food away give good food. Otherwise, why would they do that?

“There’s all this misconception about poverty, that poor people will always eat whatever you give them,” he said.

Stereotypes about poverty that inform interpretations of food codes present an obstacle to the success of community fridges, Oehninger said.

Since 2014, Oehninger has traveled the world to learn about food insecurity and plant more community fridges for what grew to become the Freedge Network.

It was not until a New York City community fridge went viral in 2020 that the movement became popular across the United States, Oehninger said.

The Brooklyn fridge was founded in February 2020 by A New World in our Hearts, a New York City-based solidarity network. There are now over 100 fridges across the city, said founder Thadeaus Umpster, who has been a mutual aid organizer since 1997.

Community fridges combat the misconception that mutual aid is charity.

“Just by doing what we’re doing, we show that this isn’t about charity,” he said. “This isn’t about rich people giving to poor people to assuage their guilt. Me sharing food isn’t charity because these are my people. These are my neighbors, my family.”

The New York City community fridges are stocked with food from grocery stores that otherwise would have been thrown out because of approaching expiration dates, Umpster said.

“A big part of why we do this is because we’re environmentalists and we see the amount of waste that goes on in society in general,” he said. “Instead of going to a landfill, the food goes to people who need it.”

Community fridges are open to community members to contribute what they can.

“Anyone can take food,” Umpster said “Anyone can put food in. Anyone can come and clean the fridge and anyone can leave a mess. So it’s very up to the people what their community fridge looks like.” 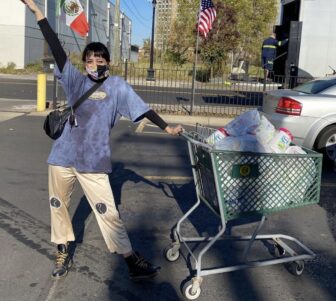 Eicher said she believes that mutual aid is the most sustainable way to combat societal issues. “Community fridges, in general, are a pretty radical solution because it’s no questions asked, it’s no money, no limitations, no policing,” she said. “It’s based on trust and love and that’s not really the way the government runs.”

“It’s a beautiful thing, the way people in the neighborhood jump in and pick up food and drive it to people they know can’t walk to the fridge,” Eicher said. “It really goes to show that if you can give people somewhat of a platform and resources, that they care and want to help each other.”