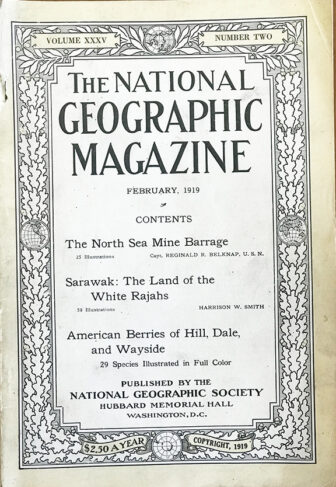 My basement has an entire bookcase jammed with National Geographic magazines, including virtually every issue since July 1979.

My father bought used copies of the oldest ones when I was a child. The oldest of the old is the February 1919 issue, published when an annual subscription cost $2.50.

The front cover is faded, the back cover is missing, its advertisers include Ivory soap and now-defunct automakers Locomobile, Thompson, Dodge, Chandler and Apperson, as well as Quaker Puffed Wheat cereal, the gunmaker Savage, Pepsodent toothpaste, Victrola records and Goblin Soap, which “works wonders.”

Inside, the only color section features illustrations of 29 berries and their blossoms, some now in potential danger of following those long-ago advertisers into oblivion.

Most grow in Michigan, says Tyler Bassett, a botanist and plant ecologist at the Michigan Natural Features Inventory.

Among the illustrations “by the gifted artist-naturalist Miss Mary E. Eaton” are the American mountain ash that grows south from Canada to the Great Lakes region “only where it can find mountains” and the black gum that grows “between Maine and Michigan on the north.”

The range of mapleleaf arrowwood spanned from New Brunswick to Minnesota, and the American cranberry from Newfoundland to western Wisconsin. Readers learned that wild chokeberries could be found from New England to Minnesota, according to Eaton’s article, “American Berries of Hill, Dale and Wayside.”

Some have unfamiliar, exotic-sounding names that roll off the tongue, silky cornel, for example, and blueleaf greenbrier and blue cohosh. Others have names we quickly immediately recognize, such as American holly and wintergreen and black alder. 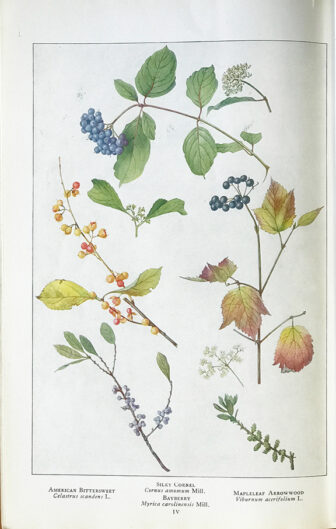 Now 103 years after National Geographic published its article on berries, we’re witnessing some changes among those species, says Bassett, who “studies the ecology of natural communities and the rare plant species they support,” according to the Natural Features Inventory. The organization promotes conservation of Michigan’s biodiversity through scientific expertise and information.

“I’m cautious, but we are seeing very hot, dry summers and differences in the distribution of precipitation,” Bassett says. Particular weather events can stress plants, such as droughts that can cause temporary diebacks.

In an ecosystem, climate change shifts the timing of when plants germinate and flower and when pollinators and plant-eating wildlife are active, he says.

“By the end of the century, we could have the climate of Georgia in Southern Michigan,” he says.

But climate change doesn’t deserve all the blame.

Another major concern is the spread of invasive plants such as honeysuckle and autumn olive in the woodlands. Some invaders are “super-aggressive,” as Bassett puts it, “and getting more aggressive with climate warming.” They reproduce more than native plants and can “hybridize a native species out of existence.

“Most invasive species seem to be favored by climate change and are able to quickly take advantage of new circumstances by growing faster and leafing out earlier than native plants.

Changes in wildlife habitat have a negative effect as well because species “need the right animals at the right time to disperse their seeds,” he says.

Meanwhile, a new study in the journal “Science” found that declines in the number of animals that disperse seeds are reducing plants’ ability to adapt to a changing climate by limiting their capacity to migrate to more hospitable ranges.

The scientists at Rice University in Texas, Iowa State University and Aarhus University in Denmark called seed dispersal a “mutualistic function” – meaning both the plants and animals benefit.

They wrote, “The mutualistic interaction networks that assemble in these communities will likely influence whether certain plant species persist and spread.” And they estimated that losses of bird and mammal species are already responsible for a 60% reduction in plants’ ability to respond to climate change.

Bassett says increased fragmentation of plant habitats leaves “smaller and smaller” patches of land where they can grow. Due to differences in their relative abundance, fragmentation means that less profuse species will have even fewer pathways to spread through dispersal of their seeds. 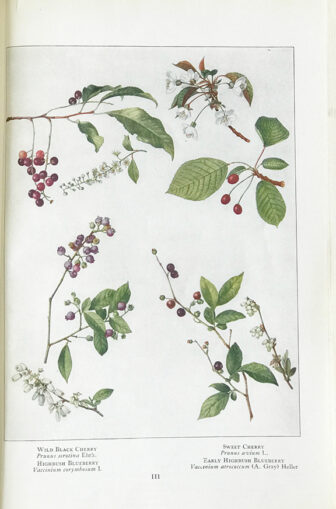 So, how to protect these plants, the snowberry and the shadbush, the wild black cherry and the smooth sumac, the spicebush and the American bittersweet?

Bassett says necessary steps include regional partnerships with land trusts and agencies like the state Department of Natural Resources to improve the connectivity that makes it easier for wildlife to disperse seeds of native plants.

Connectivity here refers to a network of pathways that animals can travel, linking what the Arizona-based Center for Biological Diversity calls “fragmented habitats that constrain wildlife movement.”

In addition to preventing seed dispersal, lack of connectivity impairs animals’ ability to find shelter, mates and food, while isolating populations and leading to possible local extinction of sensitive species, according to the center, which has offices in Minneapolis and Duluth.

The Southwest Michigan Land Conservancy is addressing that problem, he says. The nonprofit organization works in nine counties in the southwestern part of the state, including Branch, St. Joseph and Allegan counties.

“Animals as dispersal agents can move more easily,” Bassett says. “A species needs a place to live that suits it.”

One thought on “Threats to the native berries amongst us”