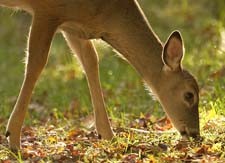 Reports of wildlife crime have reached their highest levels on record while related arrests are trending downward, according to new data from the Michigan Department of Natural Resources.

The department’s Report All Poaching hotline received around 60% more complaints related to hunters and wildlife crime in 2020 than it did in 2018. At the same time, arrests related to wildlife crime fell, despite a rise in hours worked by DNR officers.

This spike in complaints could be caused by more people using outdoor areas during the pandemic, said Nick Green, the public information officer for Michigan United Conservation Clubs (MUCC), a coalition of outdoor sports groups.

“You got to be careful to not confuse correlation with causation, just because there are more calls it doesn’t mean any of those calls are valid,” Green said. “I would say there probably are more reports because more people were home, and more people were out in the woods hunting. We saw increases in almost every (hunting) license category the first year of COVID.”

Lockdowns contributed to at least some of the calls during the pandemic, said David Shaw, the assistant chief of the DNR Law Enforcement Division.

“The supervisor told me they received a lot of complaints of people just calling in and saying, ‘We’re seeing animals during the daytime; and we think that somethings wrong, like they’re sick.’” Shaw said. “When things shut down, people had so much time on their hands that every park and every open space had people utilizing it and people were seeing things that they had never seen before.”

This isn’t the case for every complaint, and experts worry that the discrepancy between arrests and reports backs up rumors that poaching has been on the rise but under the radar for years.

“It does fit anecdotally with what I’ve been hearing from Michigan hunters in general and from our members, said Erik Schnelle of the Michigan chapter of the National Deer Association. “They feel there’s quite a bit of poaching going on and what gets reported is probably a tip of the iceberg of what’s actually happening.”

Experienced hunters say that most people who live in rural areas know the difference between legal and illegal hunting activities, Schnelle said. Complaints like shots fired, which rose 37% during the pandemic, and shining, which is up 33%, are hard to confuse as anything other than poaching.

“When they’re using thermal night vision stuff you may not see bright spotlights like you might have in the past,” Schnelle said. “But they might be shooting well after dark.”

Complaints from people reporting improperly disposed deer carcasses leftover from hunting are also up, but figuring out if it’s poaching-related is not always possible, law enforcement officials say.

“That doesn’t mean it’s poaching, it could be a totally legal deer that was taken,” Shaw said. “They took it home, they processed it, they boned it out and then they drive home, usually in the evening and dump it somewhere, which is a littering violation.”

Hunting groups say that the cases that get reported are usually more egregious than a littering violation. Poachers tend to be people who know what they are doing. Illegal deer hunters cut the skull plate and the antlers off the deer and leave the rest of it to rot.

“There’s always somebody saying, ‘I’m doing it to feed my family’ sort of thing as they drive around in their $50,000 pickup truck with a night scope,” Schnelle said. “I’m sure there are people that are legitimately trying to feed their family, but that’s not the bulk of what’s going on when people are poaching.”

Light penalties for wildlife crimes could be contributing to the rise in numbers. DNR officers often have to work with courts that don’t understand the nature of wildlife crime, and that can sometimes lead to a lack of aggressive prosecution, Green said.

“What’s often happening in these crimes is they offer either plea deals or plea bargains and then these folks are walking away with nothing more than a parking violation,” Green said. “I think that’s where education and effort should be placed from the hunting public, from conservationists, from stakeholders, from groups like (MUCC), to make sure that prosecutors and judges all understand how we feel about wildlife”

Some DNR law enforcement officials say that they have a harder time prosecuting cases in urban counties than they would in the Upper Peninsula, Shaw said. But the working relationship between the DNR and prosecutors is a positive one.

“I think we get very good convictions,” Shaw said. “We have 83 counties. That’s more than 83 different district courts. Some areas they may not be as knowledgeable about are regulations or the value of it, but across the board I would say we get excellent participation with our prosecutors and prosecution.”

Illegal hunting erases the gains made by members of the legitimate hunting community who work to promote healthy ecosystems, nothing infuriates hunters more than people who cheat the rules, Schnelle said.

“All that work you’ve done to improve that habitat so that the animals can live there and be healthy and grow is wasted and what you find is a dead animal with its head cut of,” Schnelle said.

The DNR Report All Poaching hotline, 800-292-7800, is one of the main weapons the department has to combat poaching. It’s unlikely that an officer is just going to happen upon a crime in progress, Shaw said. Instead, law enforcement agencies have to rely on the community to get attention.

“Because we’re dealing with victims that can’t report themselves. Wildlife is at the mercy of other people to report these crimes,” Shaw said.