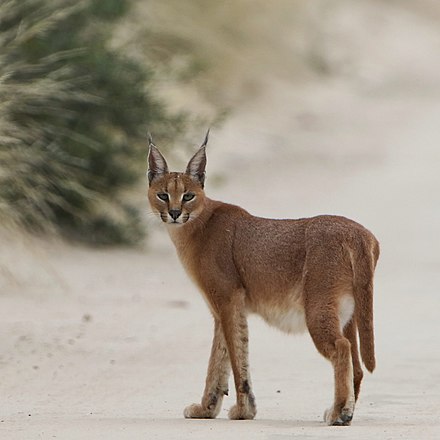 Caracal in the wild, photographed in the early morning at Kgalagadi Transfrontier Park in Southern Africa. Image: Wikipedia

An Amherst, N.Y., man has received an 18-month prison sentence for trafficking exotic African cats, according to the U.S. Attorney’s Office in Buffalo.

Christopher Casacci, 39, used his online business to illegally import and sell caracals and servals, in violation of federal and state laws, the agency said. He was the sole defendant charged in the case.

“[Casacci’s] thought was that he could spend time with animals, place them in healthy, safe sanctuaries and other environments and make some money doing it,” Nicholas Romano, one of Casacci’s attorneys in Buffalo, said in an email.

According to National Geographic, the caracal is a medium-sized wildcat that “roams the savannas, deserts and forests of much of Africa and parts of the Middle East.” They are excellent hunters, typically ranging from 2 ½ to 3 ½ feet in length and weighing 25 to 40 pounds with rust-colored fur.

The African Wildlife Foundation describes servals as “medium-sized wild cats with tawny, black-spotted coats and long legs,” found in most parts of sub-Saharan Africa containing grasslands or wetlands. Slightly smaller than caracals, servals weigh from 19 to 40 pounds and can get up to 2 feet long.

While not endangered, both wild cats have been protected under the Convention on International Trade in Endangered Species of Wild Fauna and Flora since the late 1970s. 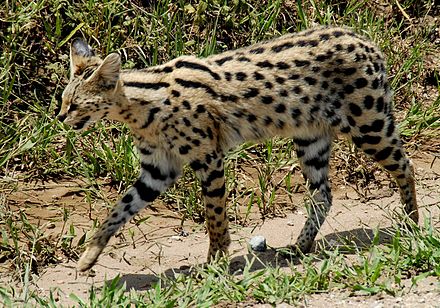 In other words, international treaties have been protecting these two wild cats from becoming endangered or extinct due to illegal trade for over four decades.

“Wildlife trafficking is decimating the world’s natural resources, so it is essential we work with our partners to put a stop to these types of illegal activities,” Edward Grace, the assistant director of the U.S. Fish and Wildlife Service’s Office of Law Enforcement, said in the press release.

“Criminals who flout wildlife laws such as the Lacey Act put humans and animals at great risk,” Grace said.

“He was introducing wild cats into communities that shouldn’t have wild cats. He was making people believe that these cats were appropriate household pets,” said Aaron J. Mango, an assistant U.S. attorney in Buffalo and one of two prosecutors in the case.

From November 2017 to July 2018, Casacci handled animals with a total market value of $180,855, including the sale of 12 caracals and five servals as pets and possessed an additional three caracals and four servals intended for sale through his online business, according to the plea agreement.

“[Casacci] limited the project to small serval and caracal kittens, which were no larger than 3 to 12 lbs., the size of a domestic cat,” said Romano.

In late 2017, Casacci applied twice for a permit to possess one caracal but was denied both times. Even so, in January 2018, Casacci launched the website www.Exoticcubs.com where he sold serval and caracal kittens for anywhere from $7,500 to $10,000 each, the plea agreement said.

According to court documents, Casacci falsely identified the exotic cats as domestic breeds of cats to conceal their identities when shipping them to a dozen buyers between April and May 2018.

“Multiple kittens imported by Casacci died while in his care or days after he sold them, and many live kittens were seized from Casacci during the investigation,” the government’s press release said. The seized cats have since been given permanent homes at accredited animal sanctuaries.

The Animal Welfare Act requires anyone transporting or selling animals to have a license, in addition to complying with standards for the humane treatment of animals.

“When he learned that he did not maintain all of the proper licensing for his African cat project in June 2018, he self-reported to the U.S. Department of Agriculture and filed an application,” Romano said.

According to Mango, law enforcement officers got involved with the case after a potential buyer reported Casacci for not having the correct permits to own the wild animals.

Romano said, “Although he obtained some of the proper licensing for his African cat project, he did not follow all of the proper procedures and rules, which is why he agreed to plead guilty.”

The plea agreement said that Casacci faced a maximum penalty of 11 years imprisonment and $600,000 in fines. U.S. District Judge Richard J. Arcara gave a lower sentence of 18 to 24 months for accepting responsibility and demonstrating a history of good behavior.

“We were satisfied with the sentence, and I do think that any sentence of jail sends a deterrent message to any possible vendors or people who are interested in entering the illicit wildlife trade,” said Mango.

Romano said that since Casacci accepted full responsibility for his conduct and began serving his sentence on Nov. 30, he will not appeal.

He added, Casacci “looks forward to paying his debt to society and then refocusing his time and attention on his family and successful businesses.”