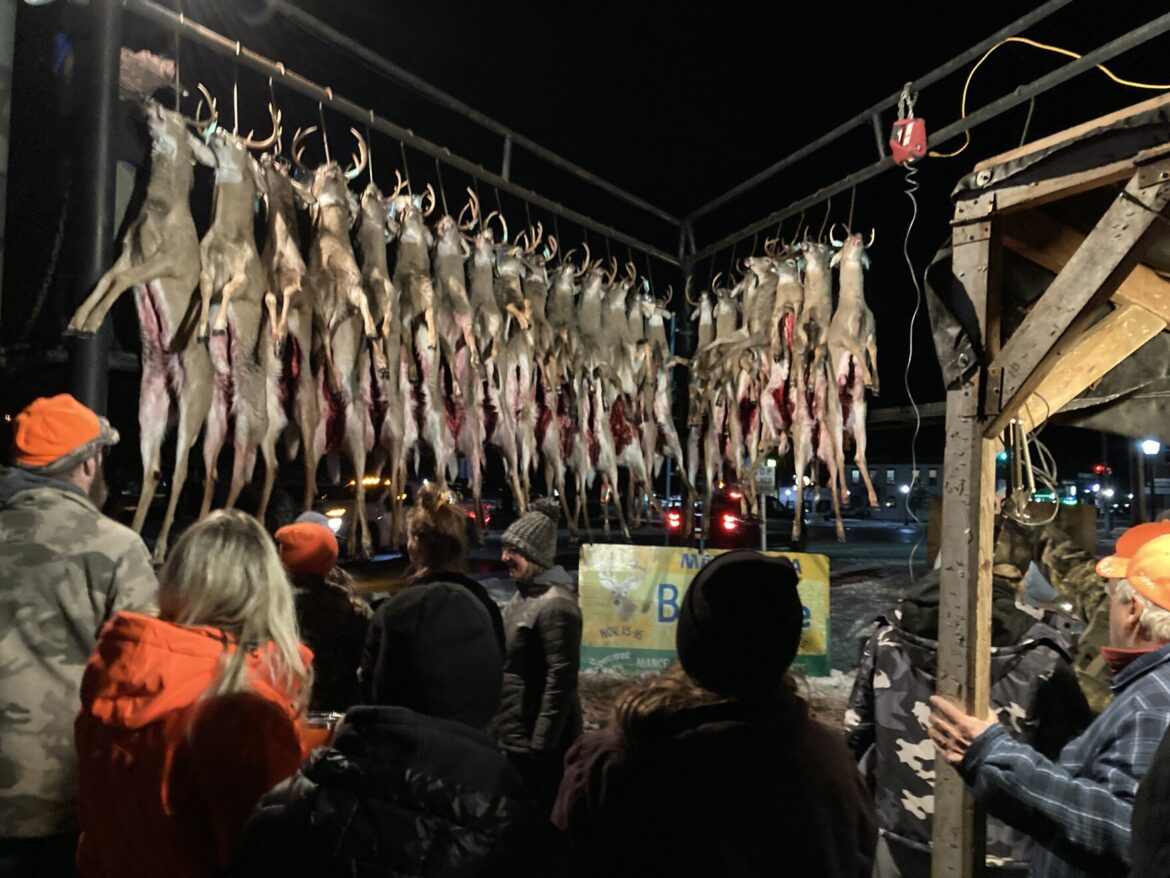 Bucks hang on the Buck Pole in downtown Mancelona on the opening day of firearm deer season in Michigan. Image: Max Copeland

The rifle season for deer hunting in Michigan got underway on Monday. According to the Michigan Department of Natural Resources, the number of hunters is down this year about 4.5% compared to 2020. But at the Buck Pole in Mancelona, the turnout was better than last year.

Once a year, at the start of firearm deer season, hunters bring their freshly killed bucks to hang them up in downtown Mancelona. They hang about 15 feet off the ground on a structure that looks like scaffolding.

This is the Buck Pole. It stands for two days in the middle of town, and it costs $5 to hang a deer.

Joanie Moore has been helping with the Buck Pole since she was in high school. She explains the process hunters go through to register their buck. 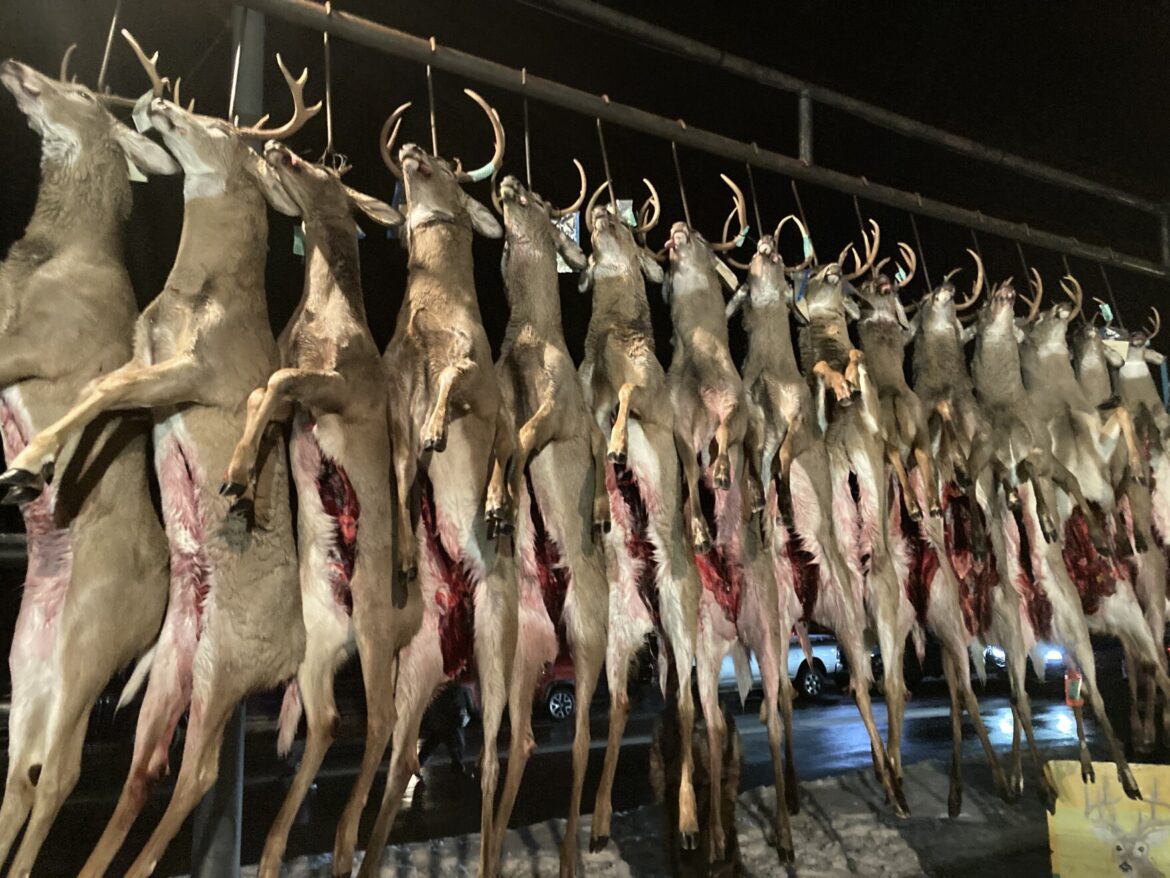 Deer hang from the scaffolding-like Buck Pole in downtown Mancelona on the opening day of firearm deer season in Michigan. Image: Max Copeland

“Bring them on the scale and then we count the points and register the width of the rack,” said Moore.

She’s the director of the Mancelona Chamber of Commerce, which holds the event.

“It was a really wide six though,” said Payne. “It had a huge neck on it.”

“I like being out in the woods,” he said. “Gets me away from people, and some time to myself.”

The Mancelona Buck Pole is technically a contest. Hunters can win cash prizes for shooting the heaviest buck, the buck with the widest rack and the buck with the most points. But most people come here for the memories, not the money. 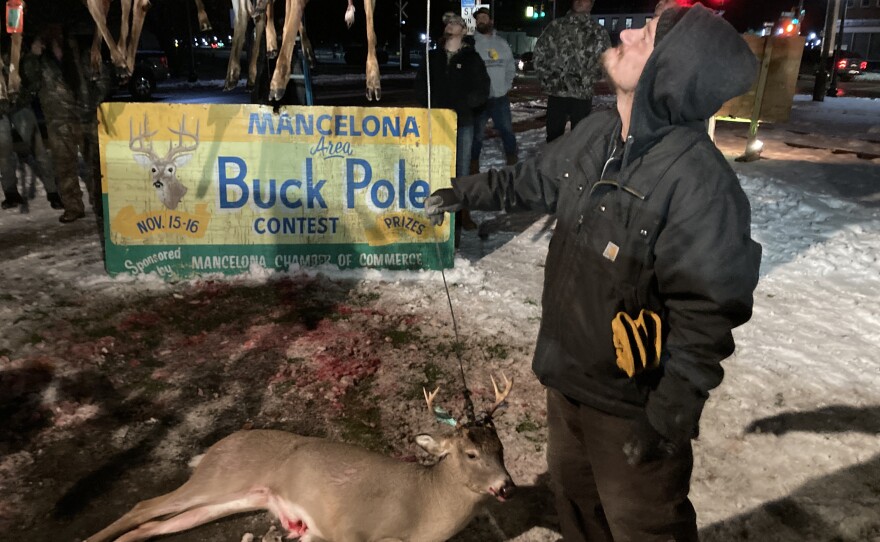 “It’s hard to get, you only get two days a year to get one,” said hunter Kevin Kanaziz.

Kanaziz said this is his 32nd opening day.

“I work two jobs, seven days a week just to get these two weeks off,” said Kanaziz. “I look forward to it that much.”

Even though Kanaziz didn’t shoot a deer in this opener, he still enjoys the tradition.

By now, a few more hunters pull up, unload deer from their trucks and head to the scale. 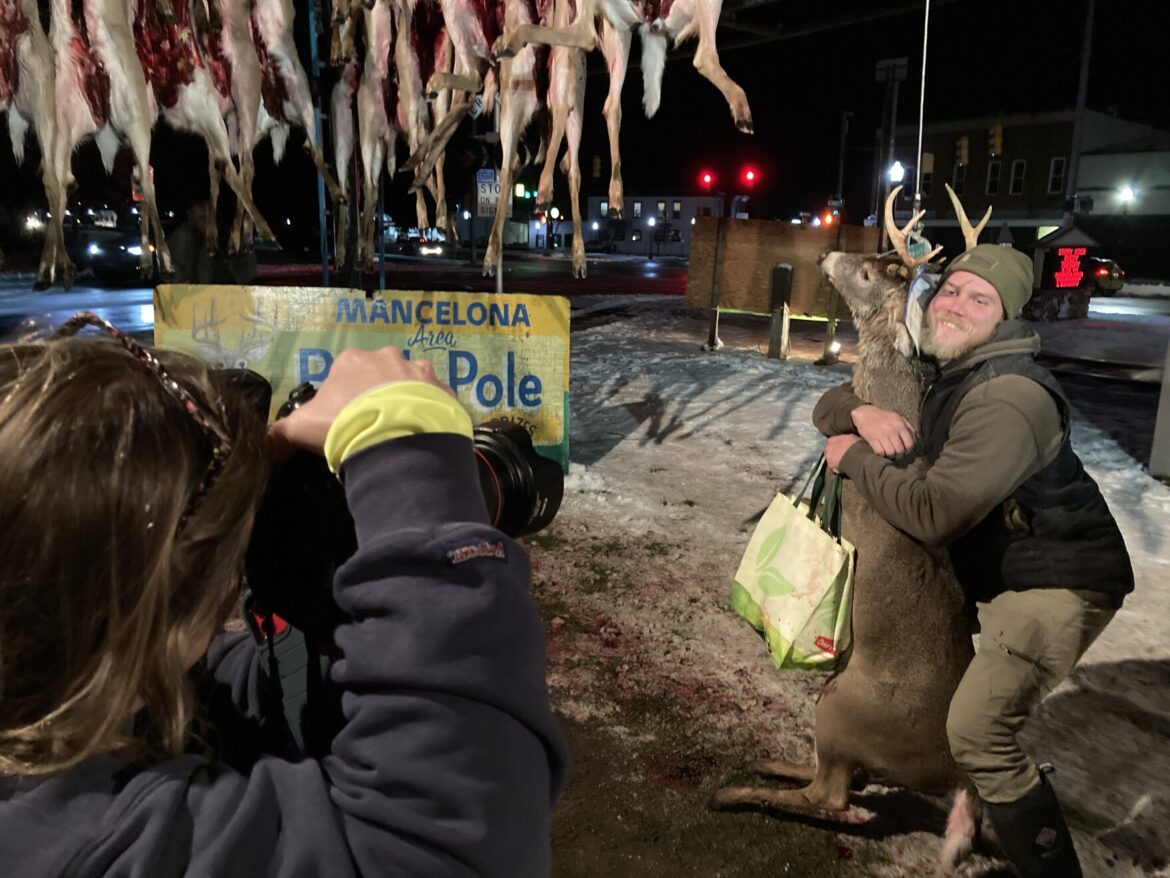 Joanie Moore takes a picture of a hunter hugging his buck at the base of the Buck Pole in Mancelona on the first day of firearm deer hunting season in Michigan. Image: Max Copeland

“With this deer, number 25, we have now tied what we did last year in two days,” said Moore. “So, this is more on schedule and on track to what we’re used to in a normal good hunting season.”

Joanie Moore says this year’s bucks are bigger and have wider racks. By the end of Tuesday night, 45 deer hang from the pole. The heaviest one shot this year is an 11 pointer from Kalkaska County. It weighed in at 163 pounds.