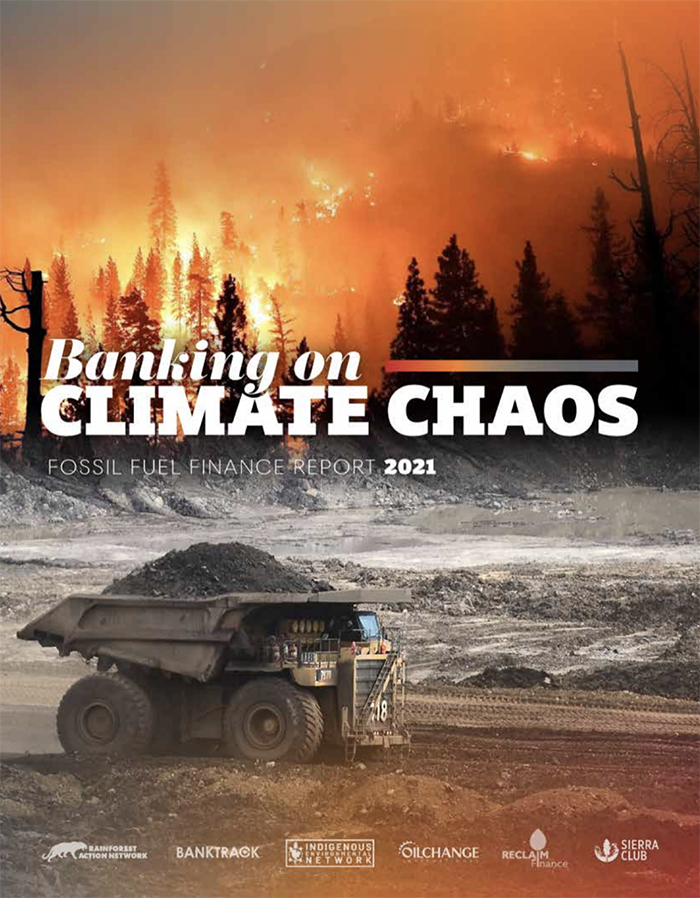 The fossil fuel industry has long been blamed for environmental degradation.

But what about the financial institutions accused of making environmentally destructive projects possible?

Sixty of the world’s largest commercial and investment banks invested $3.8 trillion into fossil fuels between 2016 and 2020, according to the Fossil Fuel Finance Report 2021.

Thirteen of those banks are based in the United States and Canada, accounting for almost half of the world’s fossil fuel financing, the report said.

Keith Stewart, a senior energy strategist at Greenpeace Canada, said a lot of people are looking at banks as the next focus for environmental activism.

Three of the five largest Canadian banks (RBC, TD Bank and Scotiabank) have committed to Canada’s net zero emissions goal for 2050, a measure that will support environmentally conscious finance activities by focusing on lower-carbon business financing, according to the Canadian Bankers Association. 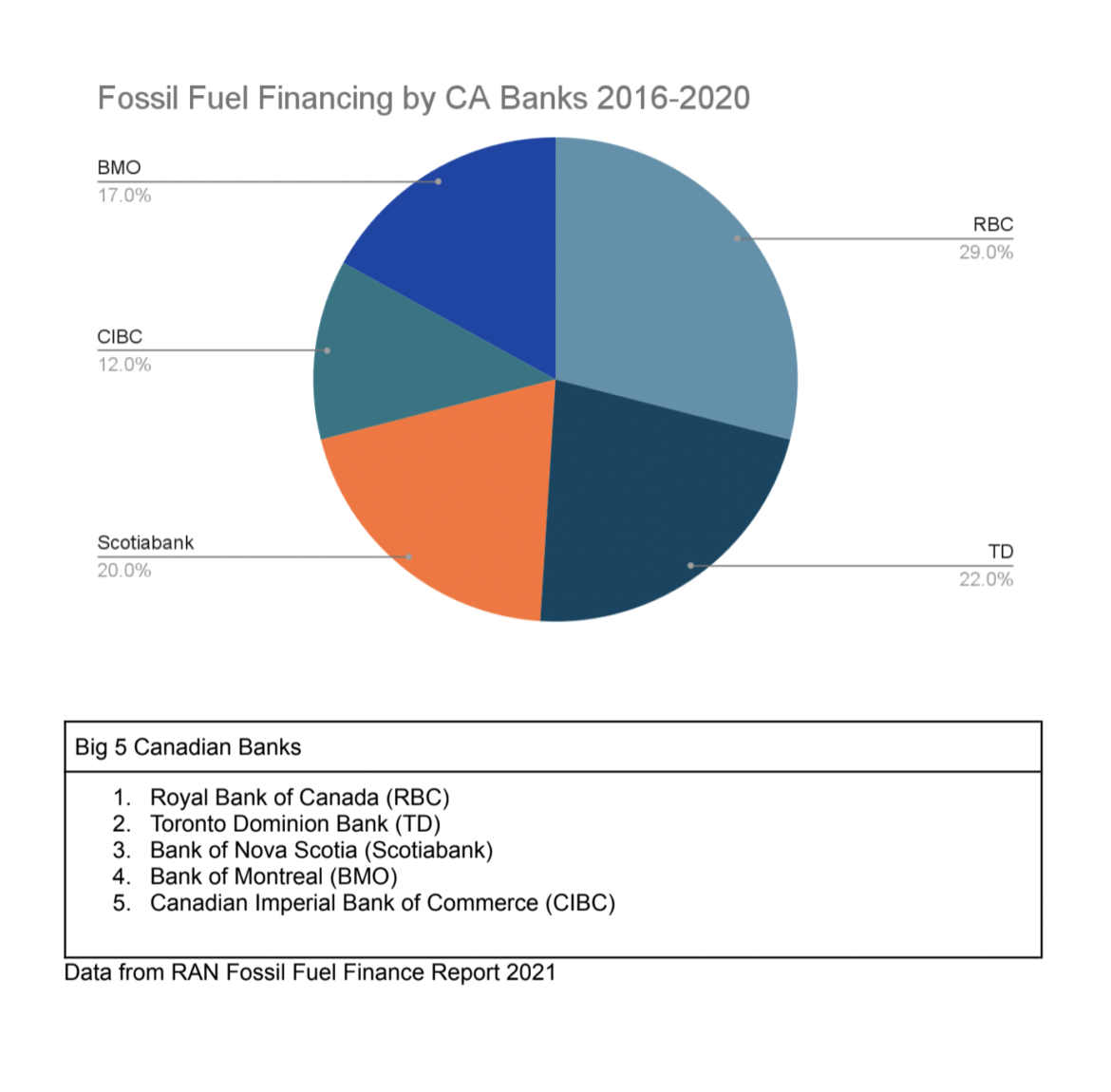 There are no established, concrete plans for achieving that goal, however, Stewart said.

“These are vague, high-level commitments that don’t require the banks to do very much,” Stewart said. “At the moment they’re all talk, so we have to force them into action.”

As bank investments become greener and companies grow increasingly independent of fossil fuels, communities and workers affected by the transition will require support programs, he said.

Many banks have put restrictions on financing coal-fired power plants, yet environmentalists say that isn’t enough.

“Science has told us we need to stop all new investment in oil, gas and coal,” said Alison Kirsh, the lead climate and energy researcher at the environmental advocacy group Rainforest Action Network in San Francisco.

Even so, $609 billion CAD ($481 billion USD) of Canadian bank loans went to oil and gas companies between 2016 and 2020. Of these companies, Enbridge Inc., a multinational pipeline company based in Calgary, Alberta, received the most funding, according to Greenpeace’s “Banking on Climate Chaos” report.

Stewart said, “Oil is Canada’s family business. It’s a really outdated idea and one that has to be changed.” 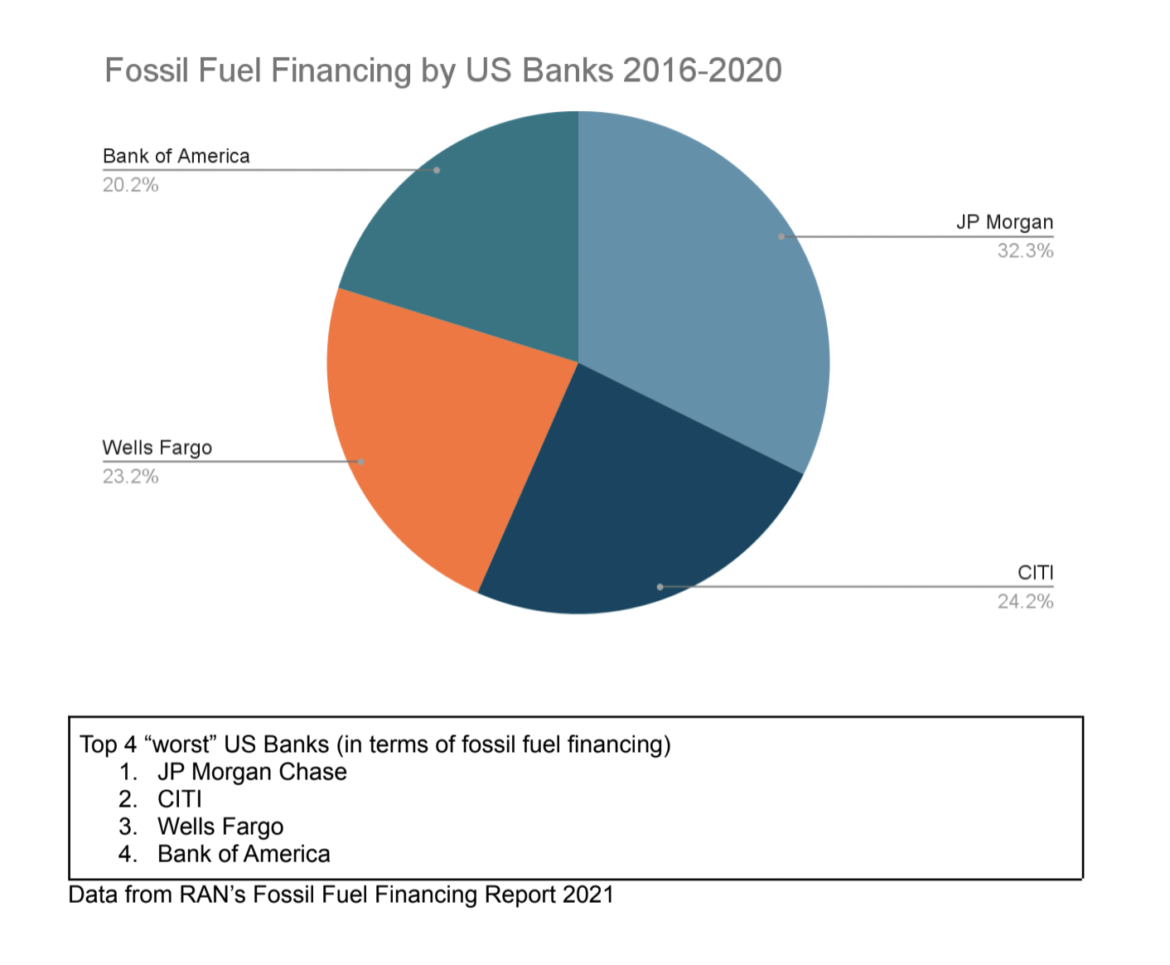 Because of those pipelines’ proximity to the Great Lakes, with Line 5 running under the Straits of Mackinac, advocacy groups and organizations have fought these projects, arguing they expand the tar sand industry and put the Great Lakes at risk.

Despite such opposition, the Line 3 Replacement Project, which enlarged and lengthened a pipeline built in the 1960s, is nearly complete.

Line 5’s dual pipelines continue to transport crude oil in the Straits, despite being hit by anchors. Enbridge says the pipelines were not damaged.

Even so, in response to concerns about the location of Line 5, Enbridge plans to finance and build the Great Lakes Tunnel, which would put the pipelines deep under the lakebed. At those depths, the possibility of anchors crashing into the pipelines would be eliminated and chances of crude oil escaping would be reduced, said Ryan Duffy, a media relations officer at Enbridge.

65% of Michigan residents support the tunnel project, which Enbridge says is the best long-term solution for Line 5, Duffy said in an email.

Kirsh, of the Rainforest Action Network, said Enbridge’s endeavors are largely the result of banks loaning money to the company instead of anything project-specific.

“If you’re funding a company for its general corporate purposes, you need to be accountable for essentially everything that company is doing,” Kirsh said.

Increasingly, people are recognizing the crucial role bank funding plays in many controversial projects as the media highlights the projects they finance, she said.

“The financial institutions in the financial sector are now being seen as players in this game of climate crisis,” she said.

Although there is no law curtailing such bank activities, public pressure has fostered change. After all, banks are businesses, Kirsh said, and if customers see they’re funding harmful projects, they can take their business elsewhere.

“The more fossil fuel funding becomes a reputational and financial risk for banks, the more they’re going to pay attention to it,” Kirsh said.