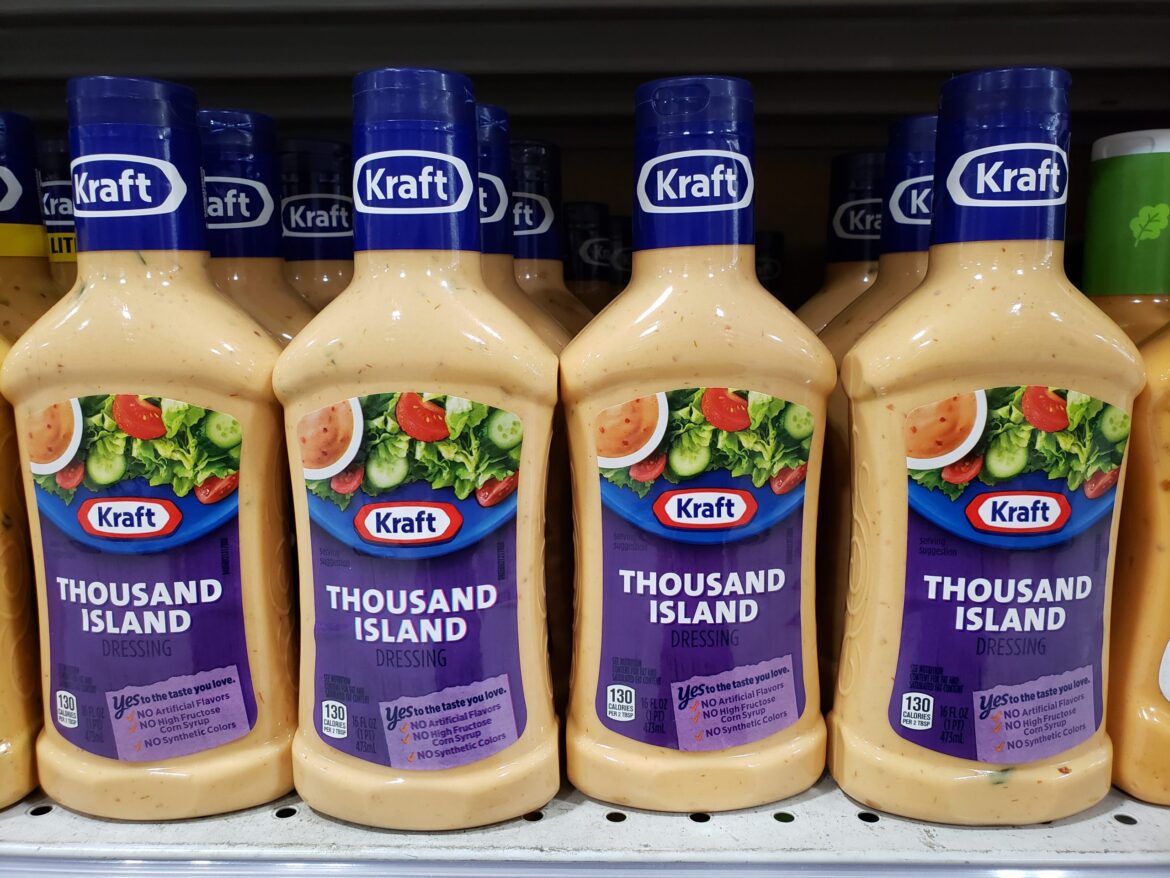 What do you get when you mix mayonnaise, a vaudeville star, two swanky hotels and a fisherman’s wife?

If you guessed Thousand Island dressing and an age-old mystery, you’d be correct.

Today, Thousand Island dressing is bottled and sold in grocery stores nationwide. You may even find a simplified version of the dressing (mayonnaise, ketchup or tomato puree, and pickle relish) at your favorite burger spot, masquerading as their “special” or “secret” sauce.

For those looking to recreate the dressing at home, there are a slew of recipes on- and off-line, each with varying ingredients and ratios. Traditional recipes include diced boiled eggs and Worcestershire sauce.

Many recipes also include an acid, like lemon juice or vinegar, and some call for mustard or hot sauce. More elaborate recipes may include chopped onion, garlic, herbs, peppers, olives or nuts.

“All of that stuff… no… it doesn’t have any of that stuff,” said Brad Minnick, owner of the Thousand Islands Inn. “At least the original one doesn’t.”

But what is the original recipe? It’s a different story depending on who is asked.

The original recipe can mostly be traced back to the early 1900s in Thousand Islands, New York, where the tangy pinkish condiment got its namesake.

There, near Lake Ontario, between the United States and Canada, you can find four different origin stories for Thousand Island dressing, three of which involve a woman named May Irwin.

This theory, widely accepted in the Thousand Islands region, claims the dressing started with a woman named Sophia LaLonde. Sophia, the wife of George LaLonde, a fishing captain, would prepare “shore dinners” for him.

“The story was passed down from Sophia.” Minnick said.

It was during one of these dinners that Sophia created Thousand Island dressing, originally to be served as a dipping sauce with fish.

Eventually, she shared her recipe with the Bertrand family, who owned the Herald Hotel in Clayton, New York, at the time.

The Herald Hotel, now called the Thousand Islands Inn, changed hands over the years. When it was bought in 1972, the owner found a single sheet of paper in a safe, titled “Sophia’s Sauce.”

The paper, which was a letter from LaLonde to her groundskeeper and contains the original recipe, now belongs to Minnick, who claims himself, his partner and the previous owner are the only ones who have seen it.

“None of the dressing that are out there on the market are the original recipe for Thousand Island dressing,” he said.

Ella Bertrand passed the recipe on to May Irwin, a vaudeville star, when Irwin stayed at the hotel, according to Minnick.

Irwin, the first woman in cinematic history to share a kiss onscreen, in Thomas Edison’s The Kiss, also documented the original recipe in a letter which now sits in the Thousand Islands Museum, said museum director Sharon Bourquin.

Many in the region believe that Irwin, a fixture in high society at the time, then brought the recipe to Boldt Castle.

“In the letter, it says served at the Boldt and the Herald,” said Minnick.

In Alexandria Bay, the story begins at Boldt Castle.

Boldt Castle, which sits on a heart-shaped island, was built by George Boldt, proprietor of the Waldorf-Astoria Hotel, for his wife, Louise.

In this version, the couple were on their boat with the hotel’s maitre d’, Oscar Tschirky, who supposedly forgot salad dressing, forcing him to improvise with the ingredients they had on board.

While it’s possible that May Irwin and others got their favorite dressing from Boldt Castle, many outside of Alexandria Bay doubt this story, especially considering chef Tschirky published a cookbook during this time that did not include the dressing.

The third theory takes us to Chicago to the Blackstone Hotel, another favorite of May Irwin.

For fans of this theory, it’s supported by an award, housed at the Chicago Culinary Museum, that was given to Rooms in 1925 for creating the dressing. Food historians have traced this theory back to 1915, when a newspaper in Duluth published a recipe for “Blackstone Dressing.”

The final theory was first circulated by sociologist Michael Bell.

Bell discovered a recipe published in 1965, in the 11th edition of “The Fannie Farmer Cookbook,” which claimed that Thousand Island dressing was based on French dressing.

Bell found that this theory was mostly based on oral tradition.