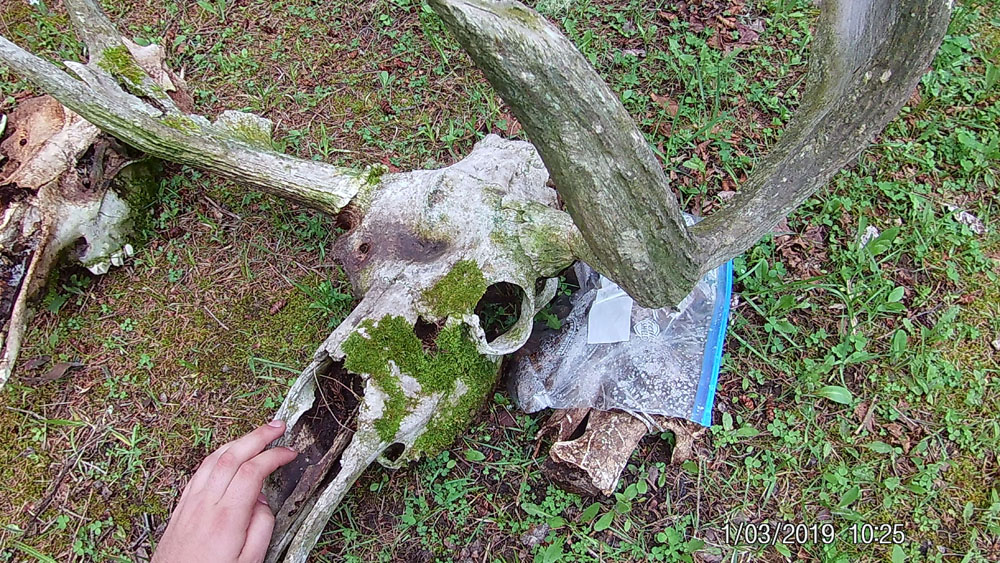 A moose skull that has taken on new, mossy life.

I was on the hunt for teeth.

The rich, dark, wet earth forced itself under my fingernails as I scratched through roots and a few beetles.

But no teeth. I needed those teeth.

Or that’s what Clay Ecklund, my expedition leader, told our team of volunteer bone seekers recently on Isle Royale National Park. I squatted in the middle of a thick cedar swamp with John Warming and Lada Zednik. Nearby, Hal Hanson, another member of our group, sat behind a few downed trees, resting from an arduous hike through nearly unnavigable terrain.

There was another presence. Or what remained of one. We were at a moose calf’s final resting place, trying to piece together its skeleton. All the bones were there, the mandibles, the metatarsus, parts of the skull. But no teeth.

We needed the teeth.

I couldn’t tell where I was. I knew I was on an island wilderness in the middle of Lake Superior. But where exactly on the island, only the GPS knew that. North was somewhere over my left shoulder.

We were all sweaty, exhausted and fighting off the summer’s first mosquitoes. We had gotten turned around an hour earlier and realized we had to go through the cedar thicket to find another water source. It was then that I realized I had sprained my ankle when I stepped off a dead log two hours earlier.

It slowly swelled in my boot. By dinner, I couldn’t walk.

Most people don’t experience national parks this way, especially on their first visit. But I had the special opportunity to participate in a volunteer backpacking expedition known as the Moosewatch Expedition.

Since 1988, the expedition has sought volunteer backpackers for a citizen science project. You set off from the dock where the boat from the mainland drops you and then hike deep into the backcountry. The goal is to collect as many moose bones as you can in a weeklong trek across the island. There are four expeditions from mid-May to late July.

This is easier said than done. This expedition is completely off-trail, meaning no paved paths, trail markers or campgrounds. Navigation is done with a compass and a pocket GPS marked with kill site coordinates – places where scientists know moose have been eaten by wolves. Sometimes the bones were super easy finds. Other times it took hours of searching to find a single vertebra. 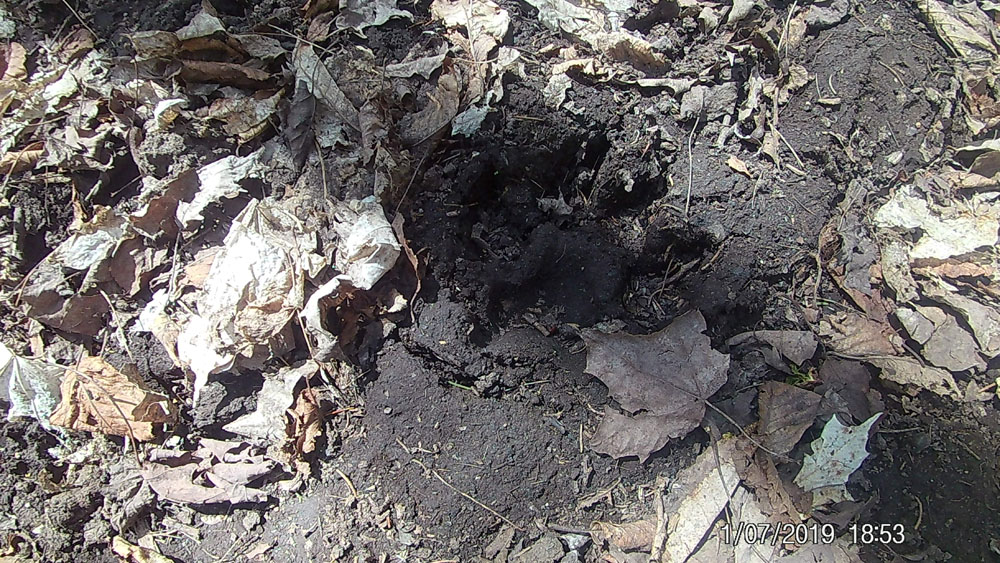 Around 20 wolves call Isle Royale home, they often use the foot trails when humans are absent in the winter and spring. We were the first commercial visitors to the island this season, so the trails were full of moose, fox and wolf tracks. 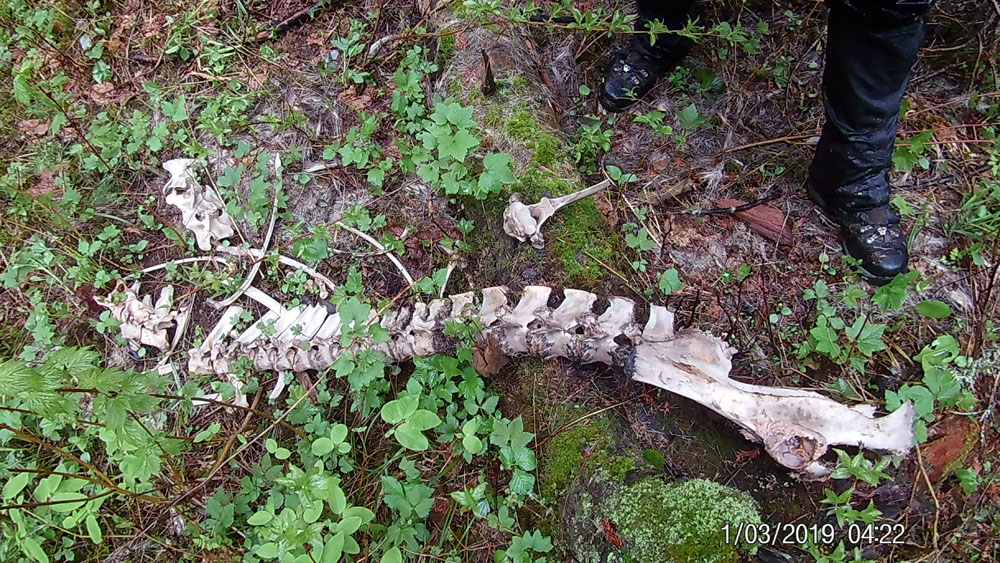 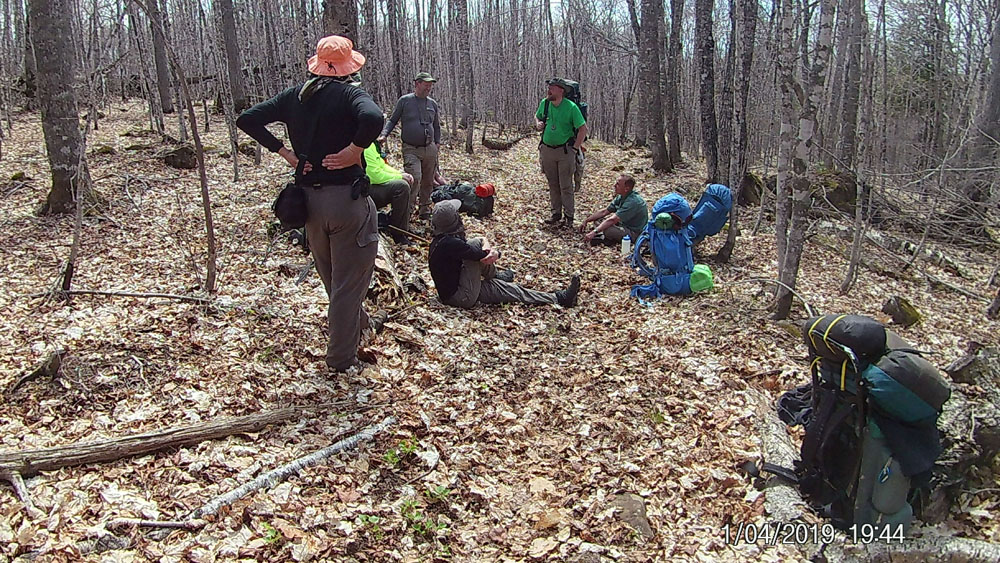 Two Moosewatch groups take a break along the 8-mile trek to our first night’s campsite. 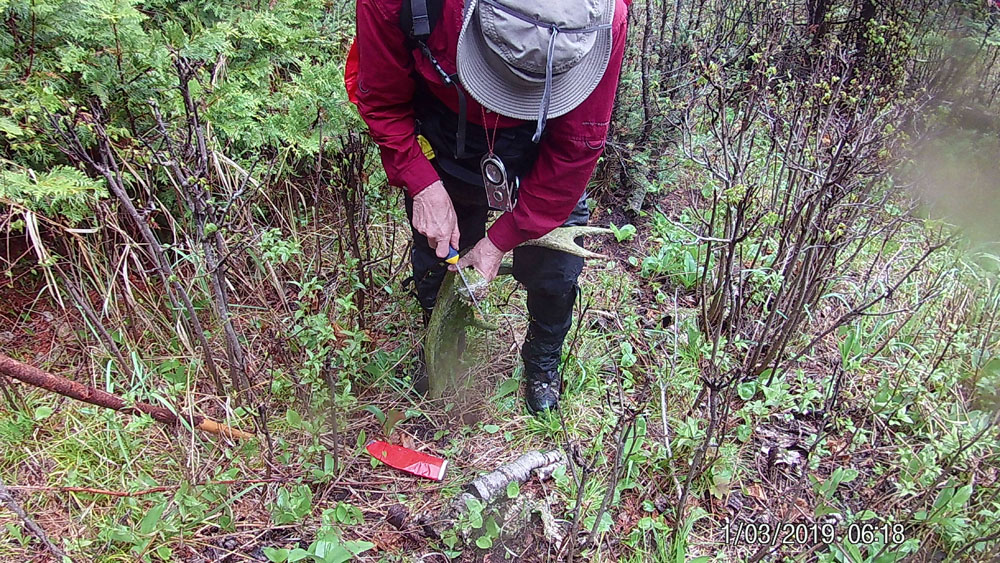 Shed antlers were not collected, instead they are marked with an “X” at its base and left in the woods. 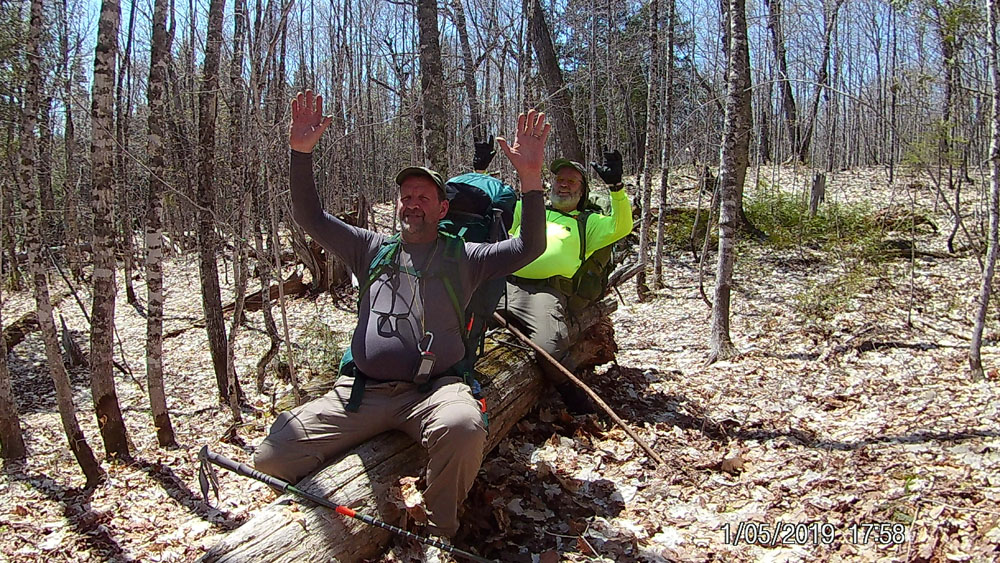 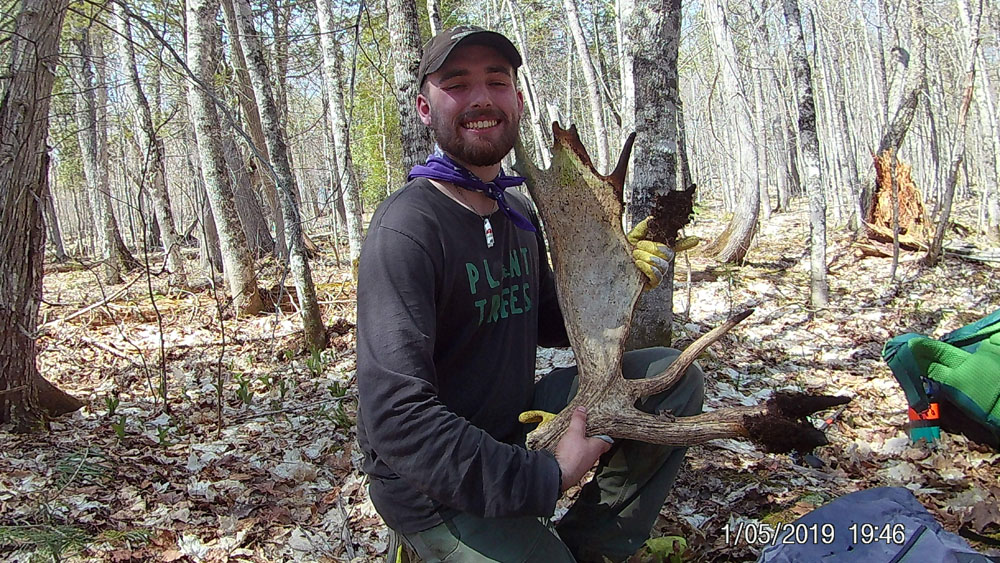 A 72-centimeter shed antler the author found, the first find of the expedition. 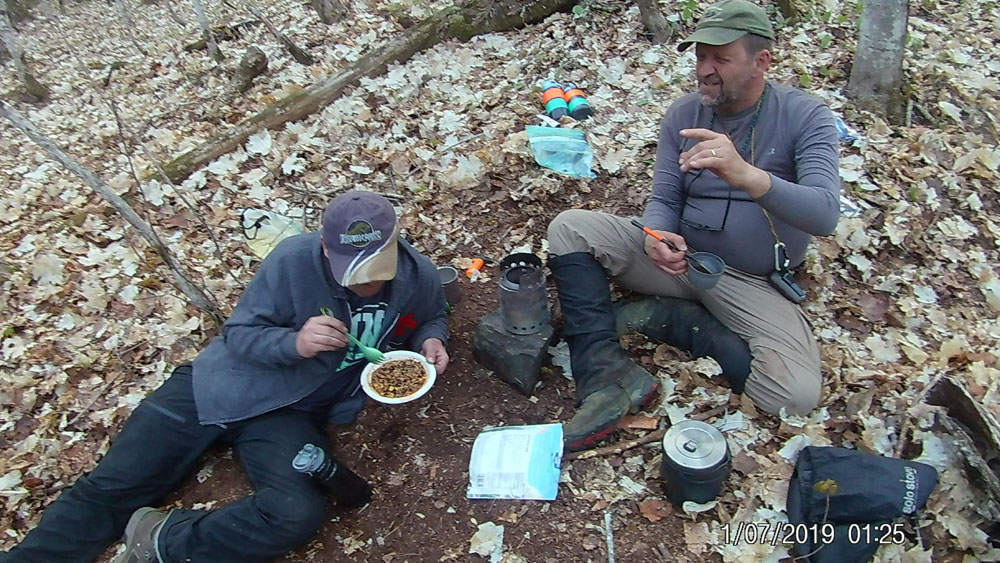 Dinner in the backcountry were mostly dehydrated meals, rehydrated by adding boiling water from a small wood stove. 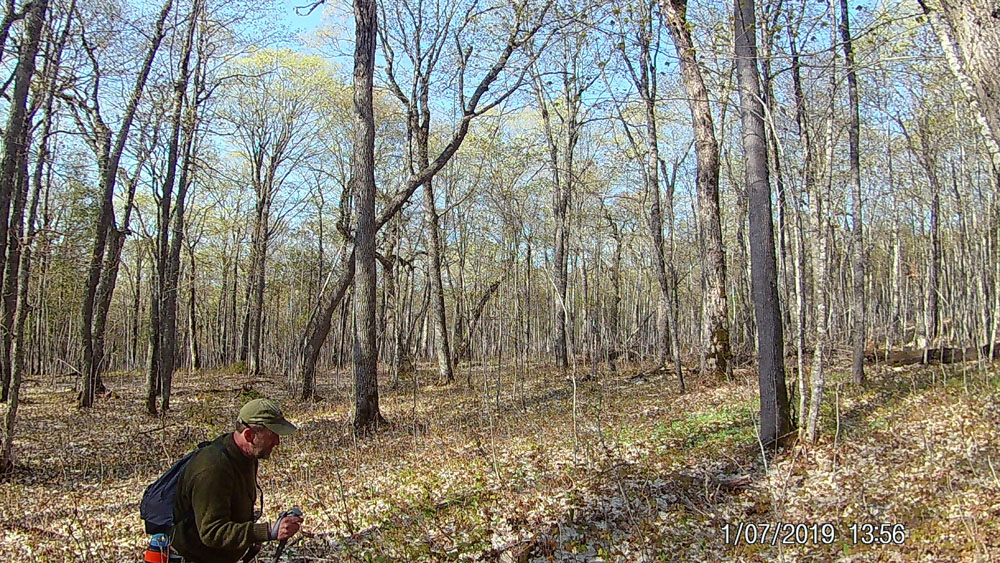 Clay Ecklund stands in front of blooming maple trees, which were brown and bare just two days before. 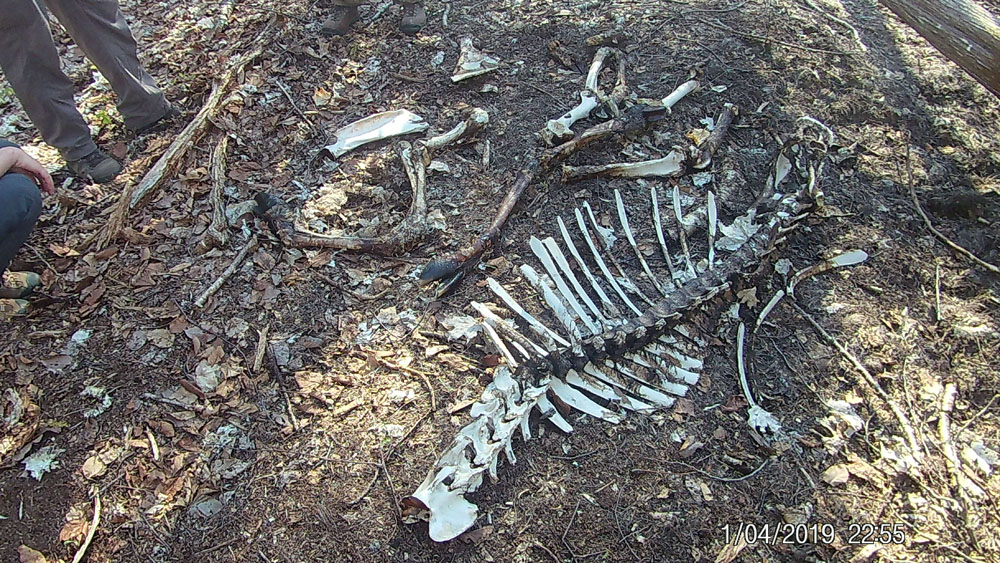 On the first day, a moose skeleton that had been arranged for the rookies by a veteran Moosewatcher.

Ecklund said the first expedition of the summer has the easiest time finding bones since the understory of ferns hasn’t grown in yet. “It’s nearly impossible to find the bones in July.”

We arranged our five-member group into a long, spread out line. We then all hiked forward into the wilderness, keeping our eyes peeled for bones. Visual contact with another volunteer was always maintained. Otherwise, the island quickly became an endless maze of maples and spruce.

When a bone or antler is found, you shout out “BONE!” to the rest of the team. That was the cue to fan out and search the area for the creature’s remains. We carried the bones we found to a central location where the team leader cataloged and photographed the partial skeleton.

All the bones must be carried out on foot as there are no roads on the island. Thankfully, not all the bones need to be carried out. Only the skulls, mandibles (the jawbone) and metatarsus (the foot bone) are needed. The teeth I was looking for help determine a moose’s age. These bones tell the researchers all they need to know about the moose.

“The bones are super valuable,” said Sarah Hoy, a research assistant professor at Michigan Tech University, who is studying the island’s moose and wolf populations. She helps lead the university’s moose-wolf survey, the longest recorded predator-prey survey in the world.

The volunteer expedition has helped build the world’s largest collection of moose bones, she said. Those bones help researchers study other things.

Among them is air quality. Moose store heavy metals from the air in their teeth.  Researchers measured the impact of the U.S. Clean Air Act by analyzing the heavy metal content of moose teeth. Since the bone collection is so old, they could compare lead and mercury levels in teeth from before and after the act was strengthened in 1970. Researchers saw heavy metal levels in the teeth drop dramatically in the early 1980s, showing that air quality had improved.

Disease is another thing the bone collection helps us understand.

We learn a lot about human arthritis from moose arthritis, said Rolf Peterson, a research professor who has studied the wolves and moose of Isle Royale for over 50 years. The moose of Isle Royale have an unusually high rate of arthritis compared to mainland moose. Although it is not conclusive, Peterson said the study has shown lifelong health problems like arthritis could be linked to poor nutrition early in life.

Unlike with humans, we can study how arthritis affects moose throughout their lives, Peterson said. “We can’t experiment on people.”

Video: Searching for moose bones in a swamp on Isle Royale.

Peterson has been with Moosewatch since its beginning in 1988 and has collected a lot of data and life-long friends from the program. It is a great way to spread the word about science and to get people involved, he said. “Science shouldn’t be an exclusive activity.”

The hands-on science was a fascinating look at moose. But I learned just as much about another mammal of Isle Royale: people.

Larry Fuerst, a retired commercial pilot from Fenton, Michigan, has been on Moosewatch since 2009. The isolation and ruggedness bring him back. He likes to turn his brain off and just listen to the island.

“Listening to nothing really is something,” he said.

Adrienne Detancio, an organic gardener from Chicago, had already been to the island three times. But this was her first Moosewatch. Hanson recruited her on the ferry home after she had finished a solo trip across Isle Royale. To her, the island is magical.

“It’s like the island is alive in a weird way,” she said.

Ron Eckoff knows the most about that comradery of the group as the longest returning volunteer. A retired public health official, he was on the second expedition in 1989 and has since returned to the island 33 times – 26 with Moosewatch.

“There were dead moose everywhere,” he said.

Ron Porrit, a retired Navy veteran from Hudsonville, Michigan, was also on that 1996 expedition. Since the moose had not yet decomposed, the carcasses were much heavier, he said “A bull moose head with its antlers can easily weigh 60 pounds.”

In our week on the island, my expedition recovered the remains of 26 moose.

But I never did find those moose teeth. Nor did I see a moose. But I found so much more. The island is full of life, both human and inhuman. I saw sucker fish spawning and spiders crawling. And, for the first time, I heard wolves howling. I learned bird calls, hacks for backpacking gear and heard stories about meeting serial killers and suffering injuries much worse than mine.

The richness of wildness on Isle Royale far made up for my twisted ankle.

While I left the island, I thought about a quote from Henry David Thoreau, the 19th century naturalist and thinker. It sums up Isle Royale’s meaning to all who dwell in its forests:

“In wildness is the salvation of the world.”