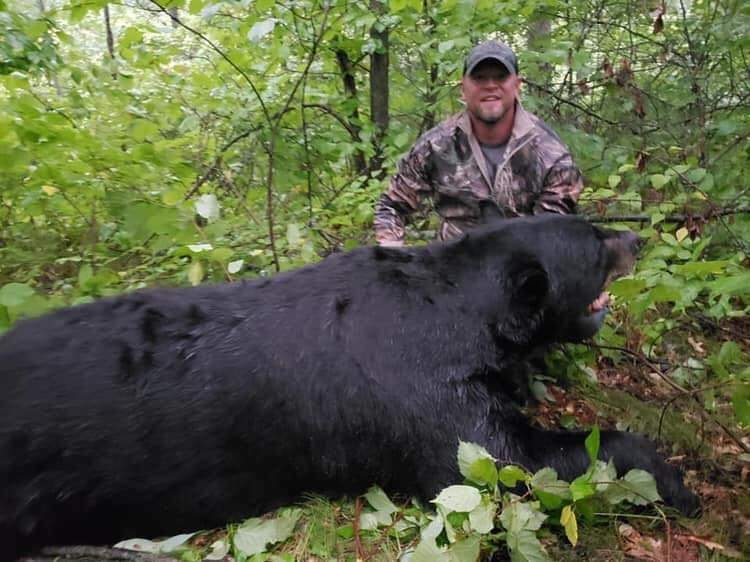 This is a grisly tale.

Sept. 1, 2019, was a deadly day for a 700-pound black bear illegally shot with a compound bow near a garbage dump on Minnesota’s Red Lake Indian Reservation.

Poacher Brett Stimac “waited until dusk, when bears frequently approach the dump to eat,” to shoot it, federal prosecutors said.

The next day, Stimac returned to the reservation with his girlfriend and posed with the bear’s bloody carcass for photos he posted on the “Minnesota Bear Hunting” Facebook page with the caption “Got it done last night with an absolute giant over 700 lbs.,” according to court documents.

The girlfriend later told investigators that they’d drive to three garbage dumps with his bow, intending to shoot another bear on that visit.

Stimac again returned to the reservation a day later to retrieve parts of the kill, “when he was unable to remove the hide, he used a saw to remove the bear’s head and paws for purposes of measuring them,” the formal criminal charges said. “He left the reservation with the bear’s head and approximately 71.2 pounds of bear meat. He left the remainder of the carcass and at least one bear paw in place.”

Law enforcement officers found the remains of the bear, a discarded yellow hacksaw covered in blood and one of the bear’s paws several weeks later.

A state Department of Natural Resources conservation officer who spotted Stimac’sS Facebook posting was aware of his long history of game and fish violations and knew he was a convicted felon who is prohibited from owning firearms, the prosecution’s sentencing memorandum to U.S. District Judge Susan Nelson said.

Announcing Stimac’s 15-month prison term and $9,500 fine, the U.S. Attorney’s Office in Minneapolis said in a news release that he took the head to a taxidermist, where law enforcement officers seized it. They also seized meat, which he falsely told them was ground bear, from a freezer at his home.

The bear is one of the Red Lake Band’s seven clan animals, and the band prohibits non-Indians from hunting bear on the reservation because of the animal’s “cultural and spiritual significance,” the U.S. Attorney’s Office said.

Stimac isn’t a registered member of the Red Lake Band and didn’t have permission to go onto reservation land, the U.S. Attorney’s Office said.

But did Stimac, who pleaded guilty to the two charges, actually kill the bear?

He insists no, no, no, – despite confessing to DNR conservation officers, bragging to “multiple individuals” and going on a podcast where he “swore on his daughter’s life that he killed the bear,” the prosecution memorandum said.

The defense memorandum said Stimac merely found the bear’s already-dead body and cut off its head.

“Stimac saw an opportunity to appear to be a hero. He had a friend take his photo while he stood over the dead bear and was holding his bow,” the defense memorandum said. “He published this on Facebook, knowing that this might very well be a state record for a bow and arrow kill, given the size of the bear.”

The defense memorandum acknowledged, “What he did was egregious. Butchery of a sacred animal to the tribe.” But, the memorandum reiterated, “he did not kill the bear.”

However, the prosecution wasn’t convinced by his belated denial, telling the judge, “Finding himself facing a federal prison sentence, Stimac now claims that he lied to his friends, his girlfriend, his daughter and law enforcement officers when he told them that he killed the bear.”

Both sides agreed that the meat seized from Stimac’s freezer was later proven to be venison, not bear.

That discovery led the prosecution to say, “Based on the timing and the state of the seized meat, DNR officers believe Stimac may have been hunting deer out of season, which could result in further state charges and shows his pattern of disregarding the law when it comes to wildlife and natural resources.”