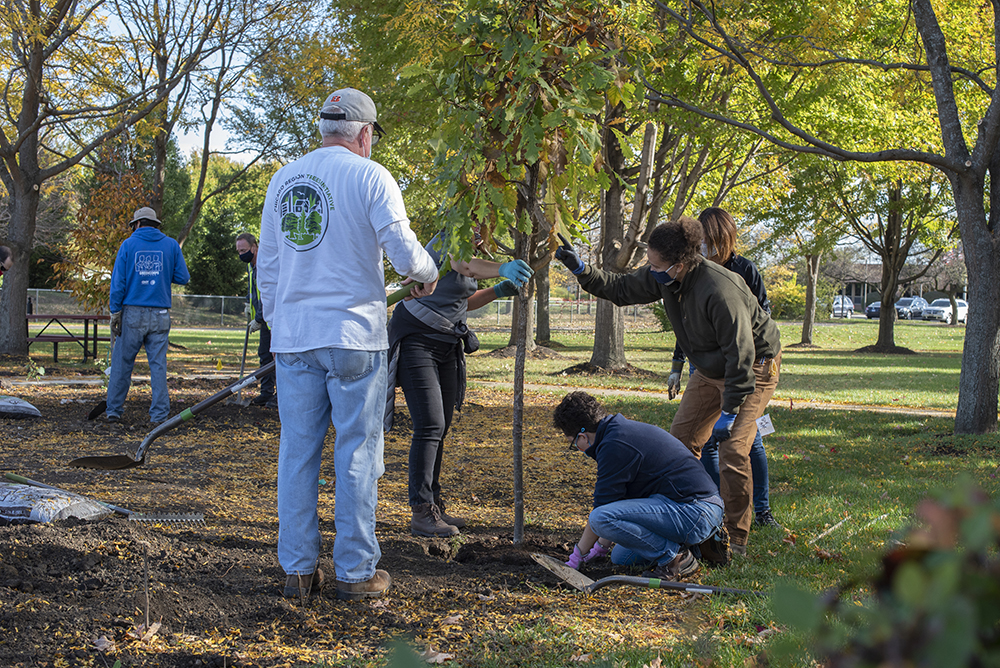 Imagine a blazing hot summer day where sweat trickles down your body and drenches your clothes.

As you look for a breeze that barely exists and shade that can hardly be found, noisy traffic drives through the neighborhood.  Even the sidewalk is a constant source of heat. No one is hammocking in a park.

There are barely any trees.

If you add rising temperatures caused by climate change, these experiences of urban residents can be deadly.

Cities have more roads, sidewalks and buildings, which absorb and radiate heat. This is the urban heat island effect, something worsened by discriminatory housing practices. It is prompting a race to plant trees in Chicago, Detroit, Minneapolis and other cities.

The Chicago Region Trees Initiative, a partnership of over 200 organizations, plans to plant 340 trees across Chicago by the end of 2021.

Mature trees decrease temperatures by providing shade, cooling the air and through evapotranspiration, said Purdue University urban forestry specialist Lindsey Purcell. It is more than the looming warmer climate, that Purcell, who has been in the urban forestry industry for 20 years, says is an important reason to plant trees.

Social needs, ecosystem services and environmental justice are other reasons. When you plant trees for those reasons you automatically take care of things like the urban heat island effect, he said.

Redlining was a practice by the Home Owners’ Loan Corp. that denied racial minorities housing loans beginning in the 1930s. The federal agency was created in 1933 to oversee home refinancing and homebuying, according to a 2020 urban tree study recently published in the journal Nature.

Many housing policies and social attitudes before and after the practice started played a role in its occurrence. 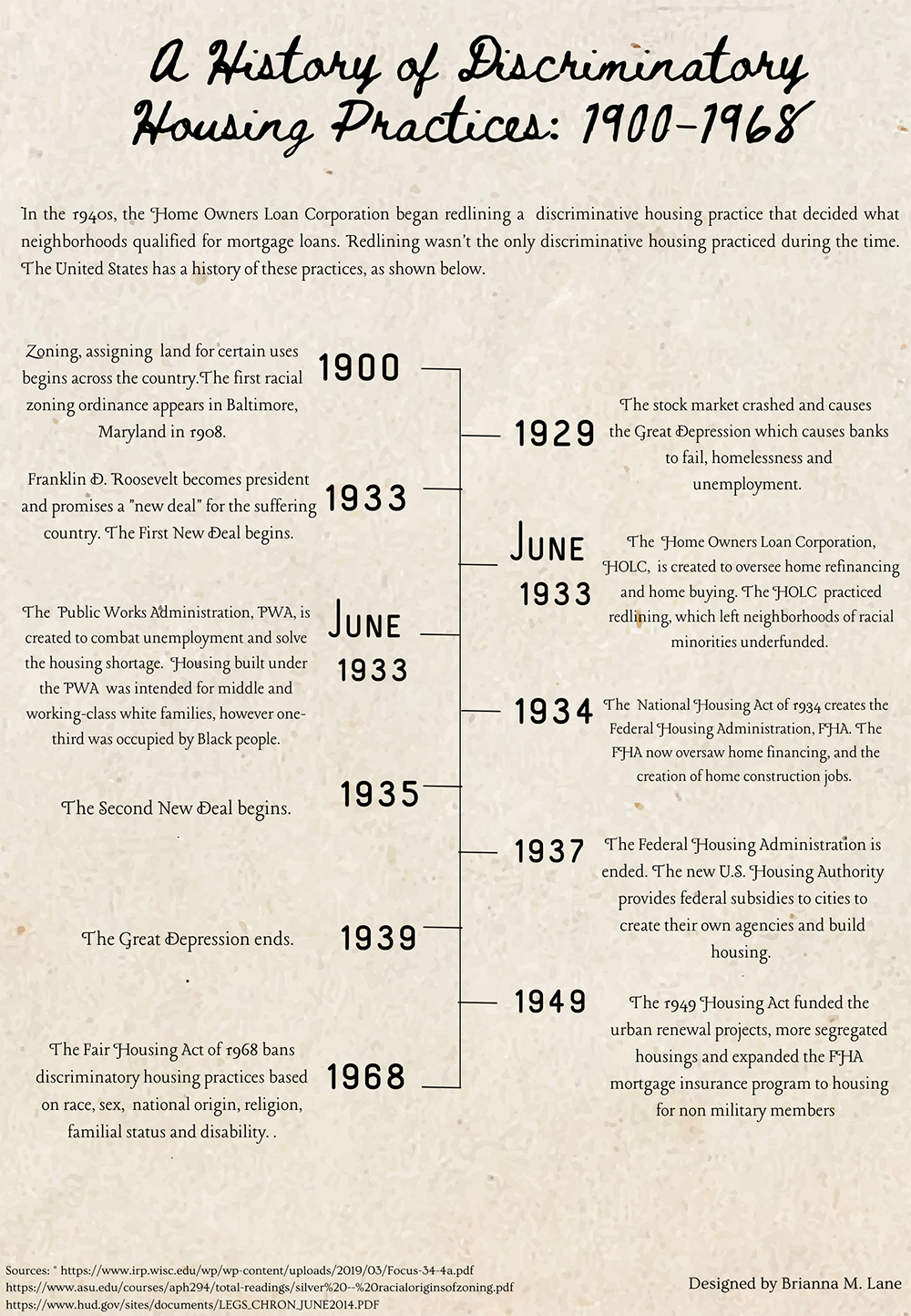 The nation has a history of discriminative housing practices which set the basis for redlining in addition to other factors. Created by: Brianna M. Lane 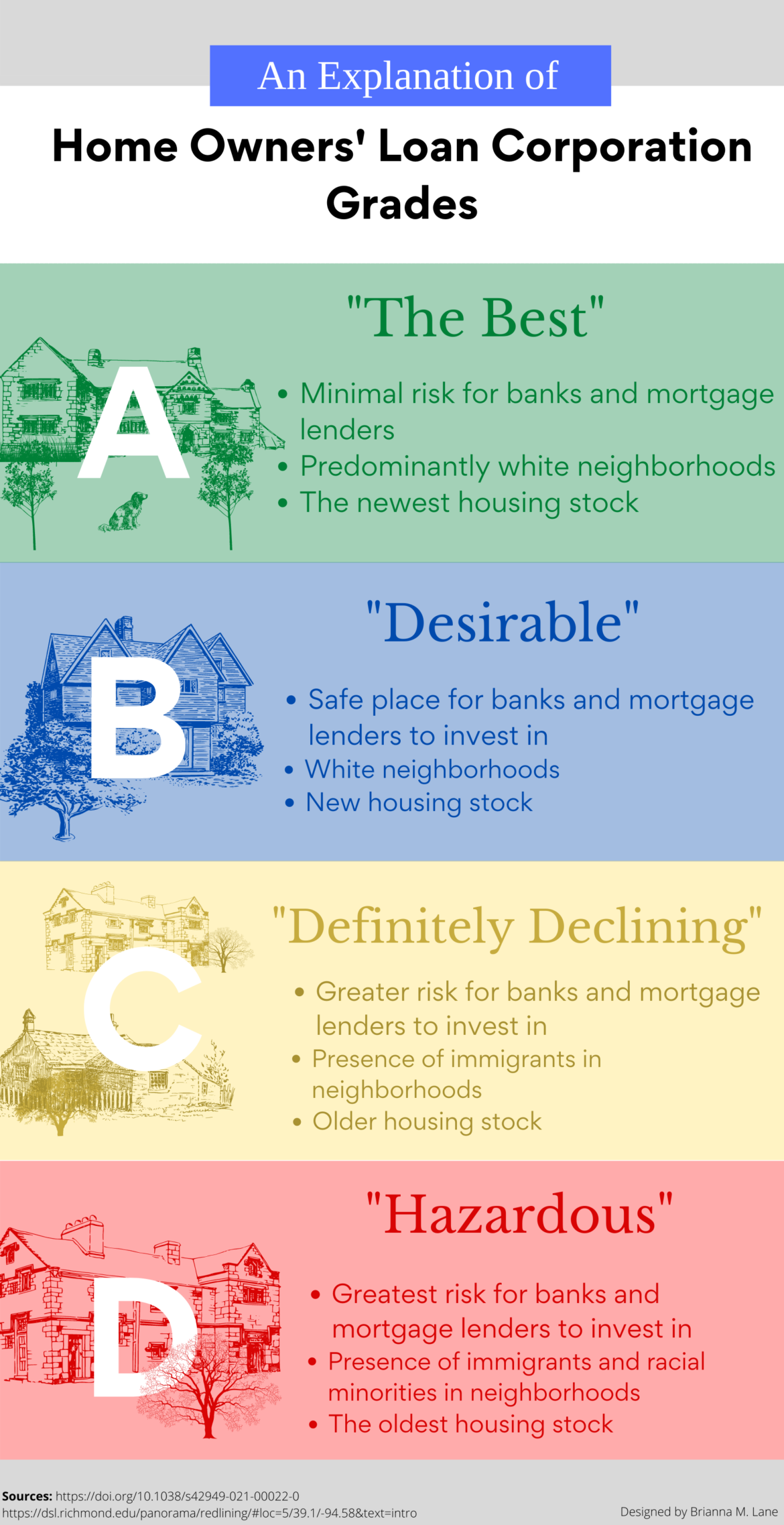 Most of the red and yellow lined cities across the nation were populated with racial minorities and immigrants.

Highways built through these neighborhoods separated them from White neighborhoods, according to Richard Rothstein’s book, The Color of Law, published in 2017. This required the destruction or relocation of green space.

“The FHA favored mortgages in areas where boulevards or highways served to separate African American families from whites, stating that “[n]atural or artificially established barriers will prove effective in protecting a neighborhood and the locations within it from adverse influences, . . . includ[ing] prevention of the infiltration of . . . lower class occupancy, and inharmonious racial groups,” Rothstein wrote.

One example of a barrier created to separate neighborhoods is the Detroit Wall south of 8 Mile Road in Detroit. The wall is close to a ½ mile long. Created by: Brianna M. Lane. Images from: Mapping Inequality, Library of Congress, Király-Seth/WikiCommons

If you think about how wide and long highways are, you can imagine how many blocks had to be taken out, Pickett said.

Of 37 redlined cities studied by the U.S. Department of Agriculture’s Forest Service and six other organizations, areas given a D rating had a 23% tree canopy. Areas given an A had a 43% tree canopy.

The reasons for fewer trees in former redlined areas is complex, the researchers report. Things like lot sizes, investments and other possible influences are understudied.

In redlined areas, people didn’t have the resources to take care of trees, Pickett said. Minimal space between housing, and nearby industrial sites are also reasons for the lack of trees.

The Fair Housing Act of 1968 banned discriminatory housing practices. Across the nation, there were 239 total redlined cities. However, redline maps for many cities don’t exist.

But urban forests shouldn’t all be the same tree, she said. Biodiversity is important because a variety of trees can better tolerate pests and diseases.

The average lifespan of a tree in an urban area is 20 years, Purcell said. When trees are in an environment that is taken care of, they can live from 25 to 50 years.

If trees are not maintained they can become a risk to life and property, Dowtin said. They can cause distress between residents and those in power, who can maintain the trees.

“People can plant trees but it’s the maintenance (that) people aren’t doing,” he said.

“We need to take care of what we have.”

In Chicago, the Plant Trees for Communities initiative has had 80 communities commit to planting trees so far.

“In 2010, we looked at trees across the region and found there was less canopy cover across the region,” Custic said.  It wasn’t distributed equally – the group saw that formerly redlined communities had few trees.

Community volunteers will care for trees because the organization doesn’t have the capacity to, Custic said.

“Trees are a symbol of hope and give residents something to look forward to.”

The initiative is one way to prepare communities for climate related changes such as heat or flooding.

For cities that are part of the TAZO Tree Corps program like Detroit and Minneapolis, trees will be planted and maintained by paid workers. TAZO has partnered with the American Forests and The Davey Tree Expert Company, to restore urban forests in cities with a small tree canopy cover.

The Minneapolis’s neighborhoods deemed desirable were near lakes and parks, except for a few.  Created by: Brianna M. Lane. Images from: Mapping Inequality, Library of Congress.

The goal of the program is to achieve tree equity which will extend to climate resiliency, said Sarah Anderson, American Forests director of career pathways.

“We want to create a new generation of tree stewards,” she said.

Cities were picked based on needs that overlapped, like the need for tree canopy cover and jobs, she said.

Applicants will be hired through The Detroit Conservation Corps and the Minneapolis YouthBuild program. No certifications or experience is required for the positions, she said. Applicants must be at least 21 years old, identify as Black, Indigenous or a person of color and can apply here.

The goal is to start planting early this summer, she said.

As important as the need is to fight climate change, the program is not just about the heat island effect.

“Often time as a person of color, your relationship with nature has been purposefully broken (and) connected to trauma,” Anderson said.

The group wants to repair that relationship while providing people with a promising career path.