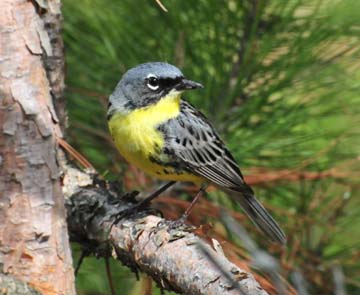 The Kirtland’s warbler came off the list of endangered species in 2019. Image: U.S. Fish & Wildlife Servic

Among them are the state Department of Natural Resources and the Michigan Wildlife Conservancy.

Its principal home is the Huron-Manistee National Forests in the northern Lower Peninsula.

The environmental management of jack pines is crucial to the continued survival of the Kirtland’s warbler, which relies on the right age group of the tree for their breeding.

According to the Michigan Natural Features Inventory, each year thousands of acres of jack pines are burned, planted and harvested on a 50-year rotation cycle. The inventory is part of Michigan State University Extension.

That technique is designed to provide enough suitable nesting habitat to support the target population of 1,000 males, the program said.

The DNR works in connection with the Natural Features Inventory, which specializes in the development and distribution of high quality scientific information about Michigan’s rare species and habitats—as well as their location.

Currently there is a multitude of species waiting to be added to or removed from the state’s threatened and endangered species list.

According to Wildman, there is a 24-step process to make official state changes to the list.

The DNR is legally required to review the list of the state’s endangered and threatened species every two years, she said.

“Although the list is continuously being reviewed, a formal process that takes approximately two years to complete is initiated every five years,” Wildman said.

Changes to the list also involve advisory committees that make recommendations to the DNR.

According to Wildman, the species to be added or removed from the list is currently unavailable, but that the state is currently on step three of the 24-step process. The process has been stalled due to the global pandemic and staffing issues.

“We have a lot of animals that are believed to not belong in Michigan,” said Patrick Rusz, the  director of the conservancy’s wildlife programs. “We look for patterns and follow the stories where local people have claimed to have seen it and investigate. Finding the truth is what we do.”

It’s important to find out the status of an animal and come up with a conservation plan, he said.

According to Rusz, the lack of knowledge and the insufficient study of rare mammals such as the least shrew is due to the fact that they’re often nocturnal and hard to trap.

The conservancy plans to build traps to expand the study of the least shrew, which is on the state’s threatened and endangered species list, Rusz said.

These traps will have a small opening big enough for only the least shrew to fit through and will allow it to mark its scent inside and leave droppings for the conservancy to study, he said.

According to Rusz, many modern techniques to study wildlife are derived from old ways of research.

He said studies have increased the chance of harming an animal in the attempt to study it.

“We are continually seeking new techniques that are also noninvasive and cost-effective,” Rusz said.

Editor’s note: This story was updated on April 28, 2021, to clarify that the Kirtland’s warbler was taken off the federal list of threatened and endangered species but remains on the state list.