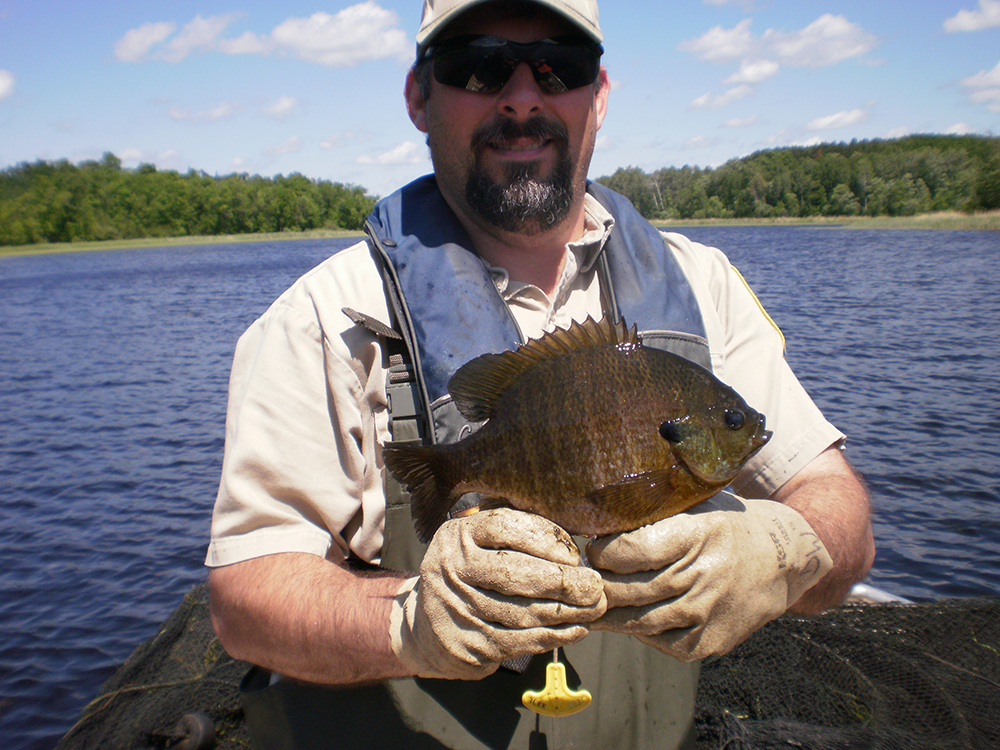 Avid angler Ron Schara has noticed a decrease in bluegill size over time.

“Minnesota has had a problem for maybe 20 years or more,” Schara said. “A lot of our lakes have bluegills that are no bigger than a silver dollar.”

The new regulations seek to resolve this issue by lowering the number of fish anglers can take home each day at 94 lakes and streams, adding to the 57 that already had reduced limits, according to the Minnesota Department of Natural Resources.

Anglers can check regulations for specific lakes using the department’s online LakeFinder or in the 2021 Minnesota Fishing Regulations booklet.

The inland water possession limit is still 20 sunfish per angler. So a person can catch the daily limit and return the next day to fish again, as long as they don’t exceed the possession limit of 20 fish, said David Weitzel, a fisheries area supervisor for the Minnesota Department of Natural Resources.

Bluegill, pumpkinseed, green sunfish, orange-spotted sunfish, longear, warmouth and their hybrids all fall under the category of sunfish, according to the Minnesota Department of Natural Resources.

About 16 million sunfish are harvested in the state every year, making them the most caught fish in Minnesota, said Weitzel who is also co-chair of the department’s panfish technical committee. 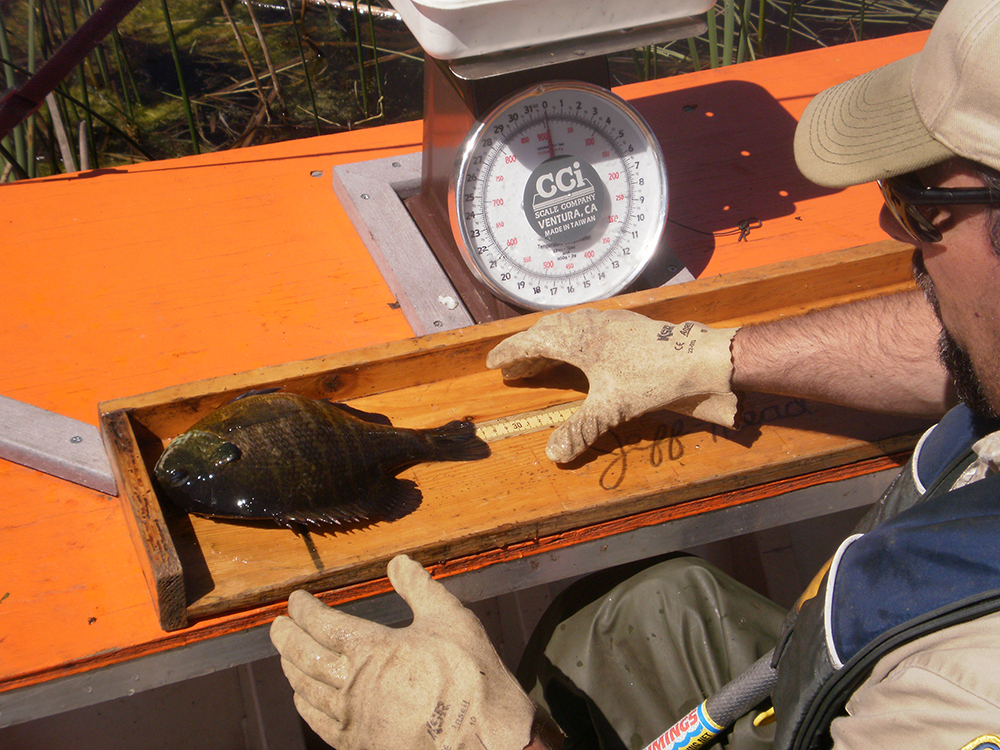 This popularity is part of the reason smaller limits are needed.

“Over time all of that harvest has had an impact on the fish’s biology and their size quality,” Weitzel said. “Over the last couple of decades in particular we’ve had anglers tell us there just doesn’t seem to be the big sunfish that they remember catching a couple of decades ago.”

The average growth rate for a bluegill in Minnesota is about one inch per year, Weitzel said. In comparison, walleye grow about 14 inches in four years.

Growing a trophy bluegill can take eight to 10 years, he said.

The Department of Natural Resources analyzed which lakes would benefit from a regulation change after deciding a statewide limit was unnecessary. Not all lakes have the potential to grow large sunfish, Weitzel said.

Based on past research, the agency determined a limit of 10 fish per day could protect the good fishing a lake already had, and a limit of five could improve fishing quality by allowing the fish time to grow.

After 10 years the state will evaluate the lakes again to see if the limits are effective, and ask for public comment before deciding whether to extend them.

Public opinion on the change is mostly positive. Of the 3,700 anglers who voiced their opinions in an online survey and meetings, about 85% were in support of the plan, Weitzel said.

Schara is the president of the Minnesota Sportfishing Foundation and Coalition, a non-profit organization that represents anglers in public policy.

The organization has not taken a stance on the new regulations yet, but Schara said he’s heard a mix of responses from other anglers — some in support of lower limits and some saying 5 fish per day isn’t enough for a meal. 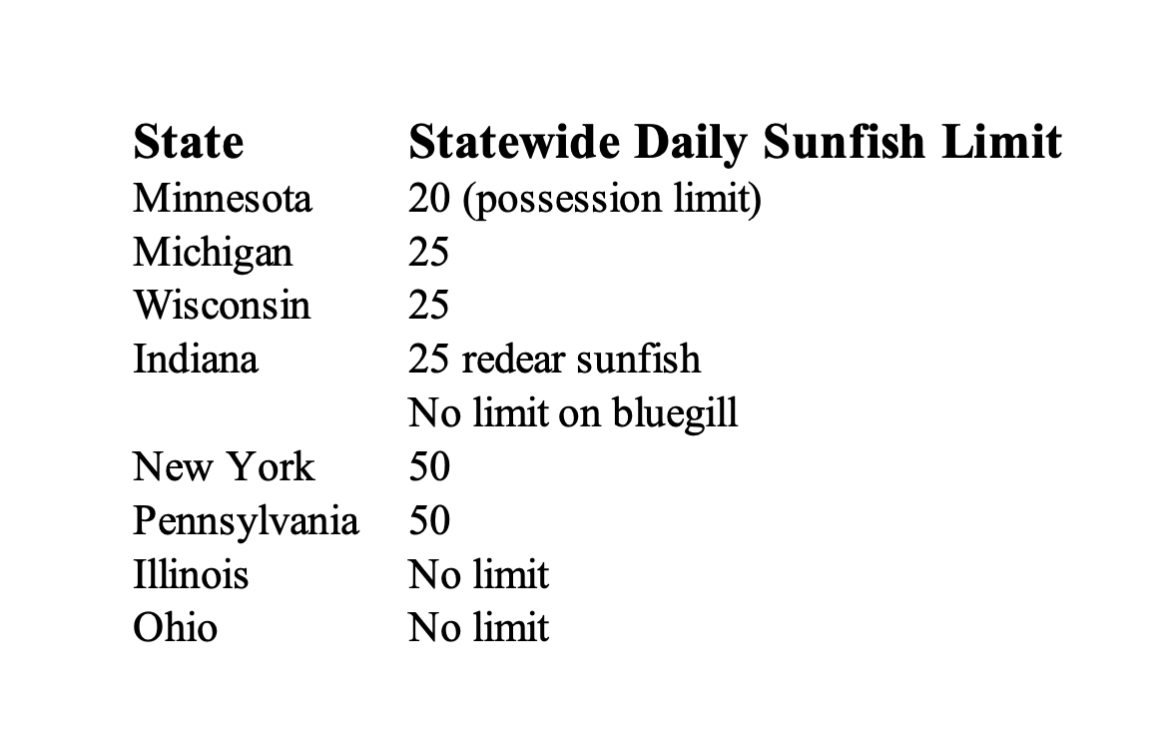 Statewide daily harvest limits vary across the Great Lakes states, but daily limits can be more or less restrictive than the state limit depending on the lake or river. Minnesota’s statewide possession limit is the total number of fish an angler can have at once over all the days of their fishing trip. Image: Taylor Haelterman

“If you look at fishing regulations all over the country the book is thicker (in Minnesota),” he said. “And some people reject that as too many rules, restrictions, on a sport that’s supposed to be put your feet up on a gunnel, relax, listen to a ball game and watch your bobber go down.”

Schara said he’s not sure if the new limits will work, but he’s sympathetic towards them. They have to try something because more anglers are more skilled at sharing information and more restrictions are needed to maintain the fish for everyone, he said.

Sunfish harvesting limits vary across the Great Lakes region. Ohio and Illinois have no statewide daily limit. Wisconsin and Michigan set the limit at 25 per day. New York and Pennsylvania have a daily limit of 50. And Indiana has a 25 per day limit on redear sunfish but no limit on bluegill.