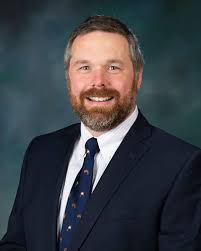 Extreme weather events such as large storms are expected to become more frequent and intense due to human-induced climate change, according to the U.S. Environmental Protection Agency.

“It’s clear that the challenges are only increasing, and there are clear vulnerabilities with the (electrical power) grid,” said Dan Scripps, the chair of the Michigan Public Service Commission.

“Our outages in Michigan tend to be more localized on the distribution grid then what we’ve seen in Texas,” he said, referring to ongoing power outages in that state following severe winter storms. “But an outage is an outage.”

Scripps said progress on the MI Power Grid Initiative, which started in 2019 to maximize the benefits of the transition from traditional sources of energy to clean and distributed energy, has helped the state prepare to respond to outages.

Distributed energy refers to technologies that generate electricity at or near where it will be used, such as solar panels and hydropower.

Logo of the MI Power Grid. Image: State of Michigan

“We have almost universal deployment of smart meters (and) advanced metering infrastructure,” Scripps said. “That allows the electric utilities to send signals out to better understand where the outages are, who has power, who doesn’t, and they’re using that data to better isolate” outages.

Advanced metering infrastructure integrates electric meters into existing power grids to improve efficiency. Such meters can better detect outages and anticipate when an outage is likely to occur.

The concerns coincide with the Biden administration’s national policy priorities.

In an interview the day after the Senate confirmed her as secretary of the U.S. Department of Energy, former Michigan Gov. Jennifer Granholm told the Washington Post, “Clearly the grid, its reliability and its capacity are a huge focus.”

Granholm said she expects the administration’s upcoming jobs package to include “a significant commitment to investing in the national grid, both expanding the lines for transmission, as well as investing in the resiliency of the grid.”

Scripps and an engineering professor from Michigan Technological University said improving homes and businesses electrical storage capabilities could help in the event of outages, and they suggested solar energy as a partial solution.

“If I were to set out the ideal case, you’d have every user of electricity have at least some generation and some storage, and with that kind of flexibility you could handle almost anything,” said Joshua Pearce, a professor of electrical and computer engineering at Michigan Tech.

The university “just finished a study that showed every person in Michigan, that isn’t living at the bottom of a valley that’s shaded, would economically benefit from installing their own solar,” he said.

Solar panels generally cost less to maintain and provide greater energy storage capacities than traditional forms of energy, according to the study.

“As electric cars become more popular, those are storage units,” he said. “Those can radically help to stabilize the grid during an emergency, like what we saw in Texas. As those become more predominant, that doesn’t necessarily mean that the utilities have to make all those investments.”

Another energy expert suggested that increased winterization of existing electric infrastructure should be considered, especially in the Upper Peninsula.

“Our system has been built to withstand some of the extreme cold temperatures, but even some of the events we’ve been seeing now have been kind of challenging the efforts we’ve taken,” said James Clift, the deputy director of the Michigan Department of Environment, Great Lakes, and Energy.

Properly weatherizing a house has been shown to reduce annual heating costs, according to the Department of Health and Human Services.

Clift said that Upper Peninsula communities have made “extra investments in winterizing their operations.”

“A couple of years ago we had an energy emergency related to natural gas delivery, which is very similar to what Texas kind of had,” Clift said. “The extreme temperatures made it harder to bring that storage facility back online.

“So, there’s always more to do and there’s always this push-pull between protecting yourself against a more and more extreme event, versus the higher costs that we might all have to pay.”