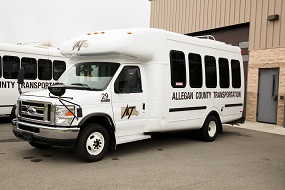 Passengers ride in this type of vehicle in Allegan County, Michigan.

Bus riders in Michigan are accustomed to what a new federal mandate requires: that all passengers on public transit wear a mask.

Clark Harder, the executive director of the Michigan Public Transit Authority, said transit agencies have been following the state’s mask mandate since ordered by Gov. Gretchen Whitmer in July.

A new federal executive order from President Joe Biden, that was effective Feb. 1, doesn’t change anything for them, he said.

Rural and nonmetropolitan transit agencies have followed the protocols to keep bus drivers and passengers safe in Michigan, Harder said.

COVID-19 safety protocols are different for each system, aside from the mask mandate. For example, some use sneeze guards and shower curtains to limit the spread of the coronavirus.

Dan Wedge, the executive director of services for Allegan County Transportation, said his agency has installed sneeze guards in each bus and limits the number of passengers to allow for social distancing. Drivers provide masks to passengers who don’t have one before they board.

The reservation service “gives us the ability to inform passengers about the requirement upfront and refuse service for noncompliance,” Wedge said.

There have been violent conflicts over mask mandates around the United States.

In September, a maskless bus passenger in New York City knocked a driver unconscious when she tried to enforce the requirement.

In July in Lubbock, Texas, a passenger used a 2×4 to beat a bus driver who asked him to wear a mask, then smashed windows and mirrors.

And in Michigan, Detroit bus drivers angry about violent passengers staged a three-day wildcat strike in October. In Detroit, Amalgamated Transit Union Local 26 President Glenn Tolbert told reporters: “Do I have to wait for a punch and then react? What are the rules of engagement?”

“When we encounter a rider that doesn’t want to comply they have responded well since there are not many other options other than Transit in these rural counties,” Stapleton said.

For transit agencies without a reservation system, there are other ways in which the drivers respond to a passenger who refuses to wear a mask.

For example, drivers in the Delta and Schoolcraft systems are trained to require masks for riders.

A driver who runs into problems with a passenger who refuses to wear a mask can radio dispatch to resolve it, Stapleton said.

Transportation agencies have focused on preparing their drivers to handle a variety of situations.

MaLissa Schutt, the executive director of Clinton Transit  based in St. Johns said drivers are equipped with tools such as being empathetic and non-confrontational, affirming passengers’ feelings and working to de-escalate a situation.

Stapleton said that unless some transit systems elsewhere in the country, the Delta and Schoolcraft county systems don’t fine passengers who won’t wear masks, but a rider who refuses cannot board.

Bus drivers in the Delta and Schoolcraft counties have added protection as well.

“Our drivers are behind shower curtains in buses to provide a barrier. Masks are a good way to add another safety measure for our staff and other riders,” Stapleton said.