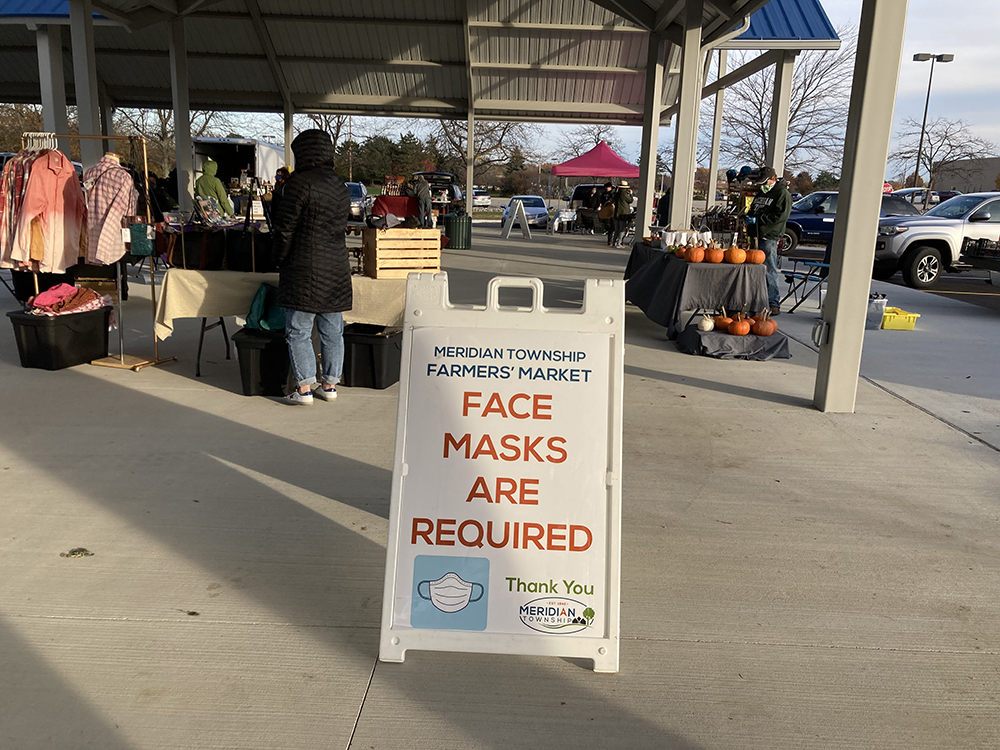 A sign at the Meridian Farmers Market in Ingham County reminds shoppers to mask up.

Most of the state’s 240 farmers markets survived during the pandemic that upended the way fresh produce, baked goods and other items are sold at the popular venues.

Requiring masks and hand-washing stations, moving outdoors and limiting crowds were some of the mechanisms to deal with the coronavirus that first hit Michigan hard in the spring. The main season is May to October, with about two dozen markets that stay open year-round, according to the Michigan Farmers Market Association.

Kara de Alvare, marketing coordinator for the Holland Farmers Market, said it was a challenge to stay open. Some customers criticized staff — in person and on social media — for requiring them to wear masks to stop the spread of the coronavirus.

But overall, de Alvare said the shoppers who did visit bought more and the market experienced a wave of new customers with food assistance. Many of them took advantage of a federally funded Double Up Food Bucks program that matches each $1 of assistance spent on fresh produce.

“It was stressful but we heard over and over again from people now happy they were and that it brought a little bit of normalcy to people’s lives,” she said. “It was definitely worth the effort to be open.”

“Many markets had smaller crowds overall but higher spending totals,” she said. “Markets had a lot of new customers and many of them were shopping with food assistance benefits for the first time.”

As people were furloughed or lost their jobs due to the pandemic, the number receiving federal food assistance jumped 30% between February and May, peaking at 1.5 million state residents, according to data from the Department of Health and Human Services.

Lamb also said some new customers sought out farmer markets as grocery stores ran out of items due to the pandemic.

“Anecdotally, we’ve heard that markets had at least as good if not dramatically better than past seasons. While there weren’t things like live music, and some markets adapted to alternative sales like online sales and drive-through markets, sales were up,” she said.

Only three markets closed this year — in Munising, Benzonia and Grayling — while the three-times-a year farmers market on the Capitol lawn moved online. A new market in Marlette in the Thumb opened.

The coronavirus did keep some regulars away, managers reported.

Jean Kohler, the manager of the twice-weekly Cadillac Area Farmers Market, said the number of customers dropped by about half.

Jim Hayden, past president of Union City Rotary Club, said his group had to work harder to sell maple syrup. For 67 years, volunteers tap trees in the public right-of-way to produce the syrup as a fundraiser. More than half of the $15,000 the group raises each year comes from farmer market sales, he said.

Hayden said The Corner Farmers’ Market moved its out-of-doors market from downtown Coldwater to a soccer field so that vendors could spread out more for social distancing.

Crowds were down this year, he said, but syrup sales held steady because his group kept at it.

“We worked every single weekend whereas before we might go every other weekend. We had to work more sessions to make up for it,” he said. The group also sells at the Marshall Area Farmers Market.

In Holland, de Alvare said all vendors moved outdoors even though the market has indoor space. That will continue during the winter market from January to April.

“Our vendors are hardy folks,” she said.

Lamb, of the Michigan Farmers Market Association, said many markets adapted. In Midland, for example, the market changed to a drive-through venue with customers driving by vendors and shopping from their cars.

“It was such a great show of how resilient and how strong our Michigan market managers and farmers and vendors are.” Lamb said.

She said farmer markets were considered an essential service during the pandemic response.

“That’s because of the role they play in the food system. A lot of things stopped in the world when the pandemic hit but food and farming did not stop,” Lamb said.