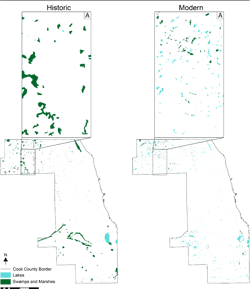 Maps of Cook County showing distribution of wetlands, including swamps, marshes and lakes, but excluding rivers during the historic (1890–1910) and modern (1997–2017) periods. There has been notable shift from larger swamps and marshes to a fragmented landscape dominated by small open water areas. Image: Urban Ecosystems

Over the decades, wetlands and other water bodies in Cook County, Illinois, have decreased by a third, while swamps and marshes have been drained or converted into lakes and ponds, causing havoc for wildlife, according to a recent study by a group of graduate students and their professor at the University of Illinois Chicago.

So here are the facts, according to the study that found 54 of 80 historic mollusk species that have not been recently recorded in the Chicago region, and 26 current species that were not recorded in historical data, including six considered invasive.

Of 54 fish species in the historic data, 23 are no longer present, and the populations of about 50% of the remaining ones have dropped. Three out of 10 species of reptiles have disappeared.

And all 25 aquatic birds reported from 1890–1910 are still in existence, and an additional 13 have been reported in recent times, possibly due to increased collection effort, according to the study in the journal “Urban Ecosystems.”

Roy Plotnick, a University of Illinois Chicago professor of earth and environmental sciences and co-author of the study said, “The major changes we’re seeing here is that more wetlands, marsh, swamps and thin areas all drained, and those became, for the most part, little lakes.”

“Some of the bigger lakes also reduced in size,” Plotnick said. “So what happened in the system is the bodies of water became smaller and more disconnected. And so that affects the overall animals among the water bodies.”

He said the major shift is that many species arrived that don’t belong in the area.

The Chicago Wilderness Region, which includes the city of Chicago and roughly 7 million surrounding acres, including portions of Illinois, Wisconsin, Indiana and Michigan, have had massive loss of wetlands as a result of urbanization.

Michael Pasterski, a Ph.D. candidate in earth and environmental sciences said, “So essentially the urbanization that we saw in Chicago was switching from these large swampy marsh areas to the smaller lakes.”

Major shifts in the hydrology of the river systems have accompanied the loss of these wetlands most notably by the 1900 opening of the Chicago Sanitary and Ship Canal.

The canal reversed the flow of the Chicago River so the city’s wastewater would no longer flow into Lake Michigan. But that reversal sent the wastewater somewhere else and was not beneficial to the area, according to Pasterski.

Pasterski said that there wouldn’t be Chicago without the canal reversal because it wouldn’t have the clean drinking water source it has currently.

“The Chicago wastewater treatment plants are actually really high quality, and they do a pretty good job of treating it. But that wastewater now flows to the Mississippi River and it goes downstream,” he said.

“The reversal was good for Chicago at the time, but I do think there’s still a lot of negative effects of it that we haven’t really addressed.” Pasterski said.

There have been some improvements in the water source in the Chicago region, and Plotnick said he believes this is why: “People are just starting to recognize the importance of these environments, and there are restoration efforts going on in various parts of the area, not just for the wetlands, but the prairies as well.”

According to an article in the Chicago Sun Times, $1 million was awarded for a three-year wetlands restoration project on Chicago’s Southeast side. The National Oceanic and Atmospheric Administration and the Great Lakes Commission funded the restoration project for the Powderhorn Lake Forest Preserve along the Illinois-Indiana border.