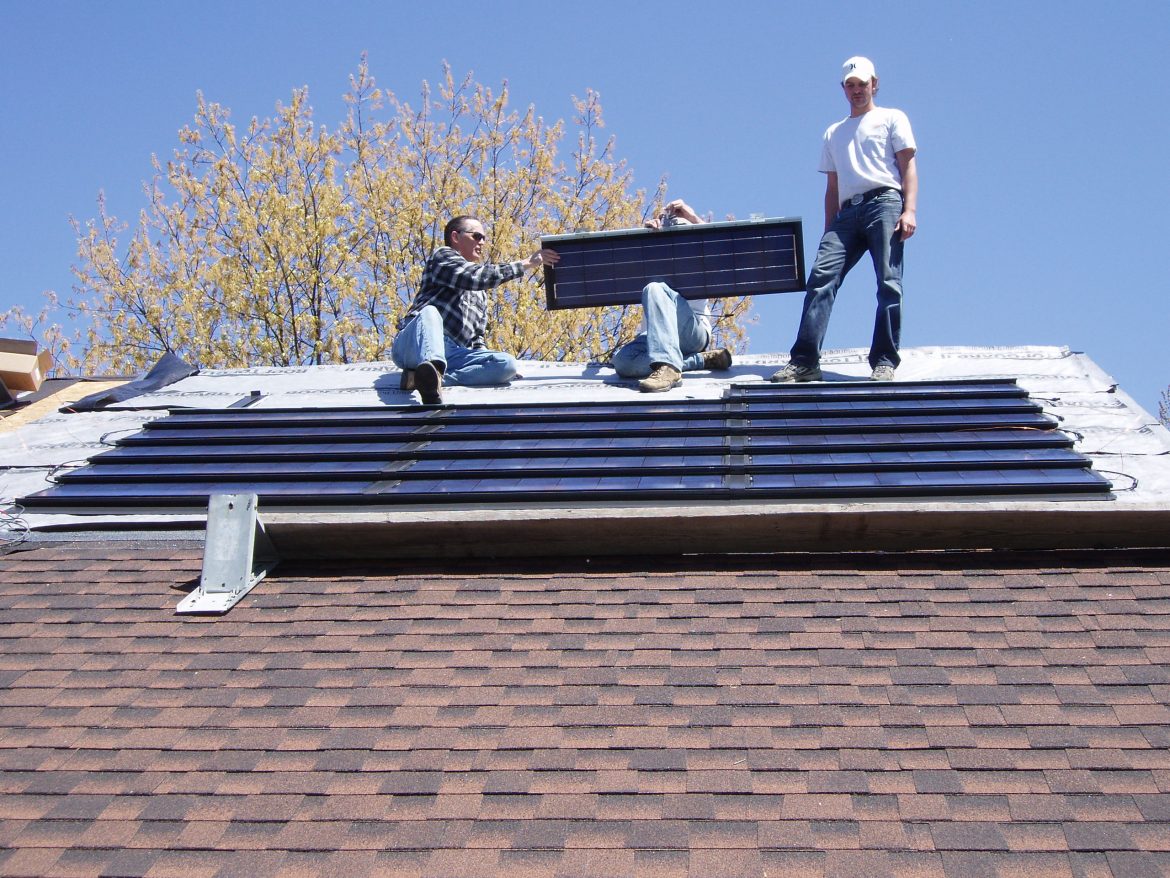 Installation of the roof-integrated solar panels on John Sarver’s East Lansing, Michigan, home in 2010. These were the only panels he used until 2019 when he added additional traditional style panels. Image: John Sarver

This year solar energy newcomers and aficionados alike can tour solar powered homes virtually in Michigan and across the nation.

The National Solar Tour is hosting a series of live and pre-recorded programming online including solar home tours, panel sessions and even a movie screening. The event began on September 28 and runs through October 3.

Due to COVID-19 related safety precautions, this years virtual programming is different from the 24 previous tours. In a normal year, participants would be able to physically attend  some of about 900 sites across the nation for tours with the owners, said the tours Communications Director Ben Delman.

But Delman said said he hopes participants will still takeaway the idea that solar energy is accessible and feasible for a large number of homeowners, and that the transition allows participants easier access to tours and information panels.

Many of the videos and photos will be saved online after the event and those interested will be able to see virtual tours of homes around the country instead of just locally.

John Sarver is an East Lansing, Michigan, homeowner who created a virtual tour of his home for the national tour. Sarver’s solar setup consists of seven traditional solar panels that sit on top of the shingles on his roof, as well as a roof-integrated panel that serves as a section of his home’s roofing in place of shingles for aesthetic reasons. 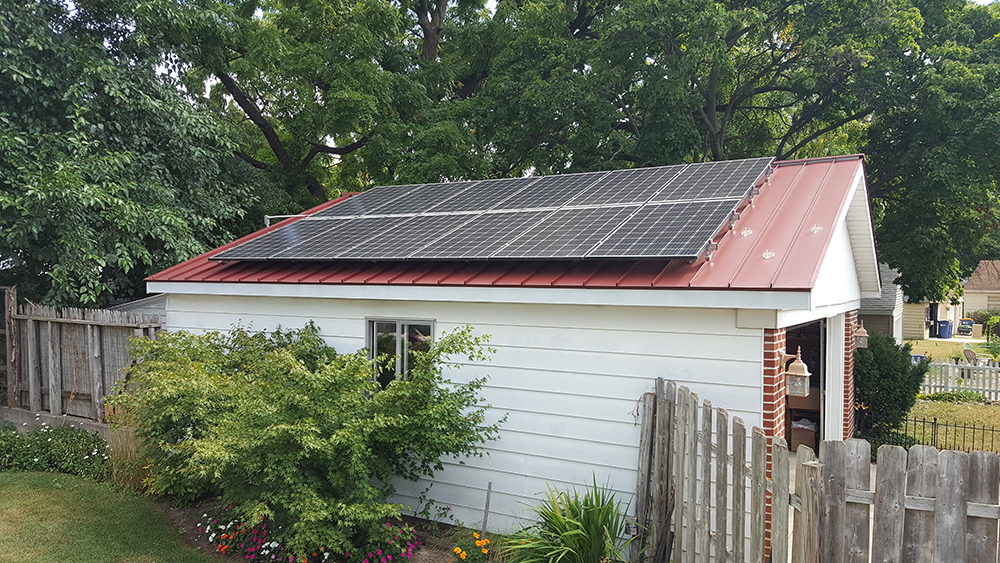 The first solar panels Bob Synk had installed in 2018 on the roof of his garage in Grand Rapids, Michigan. Image: Bob Synk

In total the panels generate about 3.4 kilowatts of electricity. That’s enough to cover about 70% of the power needed for his home.

Two years ago in Grand Rapids, Michigan, Bob Synk installed solar panels on his garage. This year he’s providing a virtual tour of his home while a new set of solar panels nears the end of the installation process on the roof of the house.

Synk said he hopes that once the new panels are set up they will be close to meeting almost all of their electricity needs with solar energy. Currently the panels on the garage cover about one-third of their power, including two electric cars.

He also tries to use the majority of his electricity after 7 p.m. because electricity costs slightly more from 11 a.m. to 7 p.m. The extra power he generates during those hours that funnels into the utility company’s grid his home is connected to earns him more credit back than the other hours of the day.

Both homeowners said they chose to go solar mainly due to the environmental benefit of using less coal and natural gas which, therefore, creates less pollution.

But they also cited economic benefits. 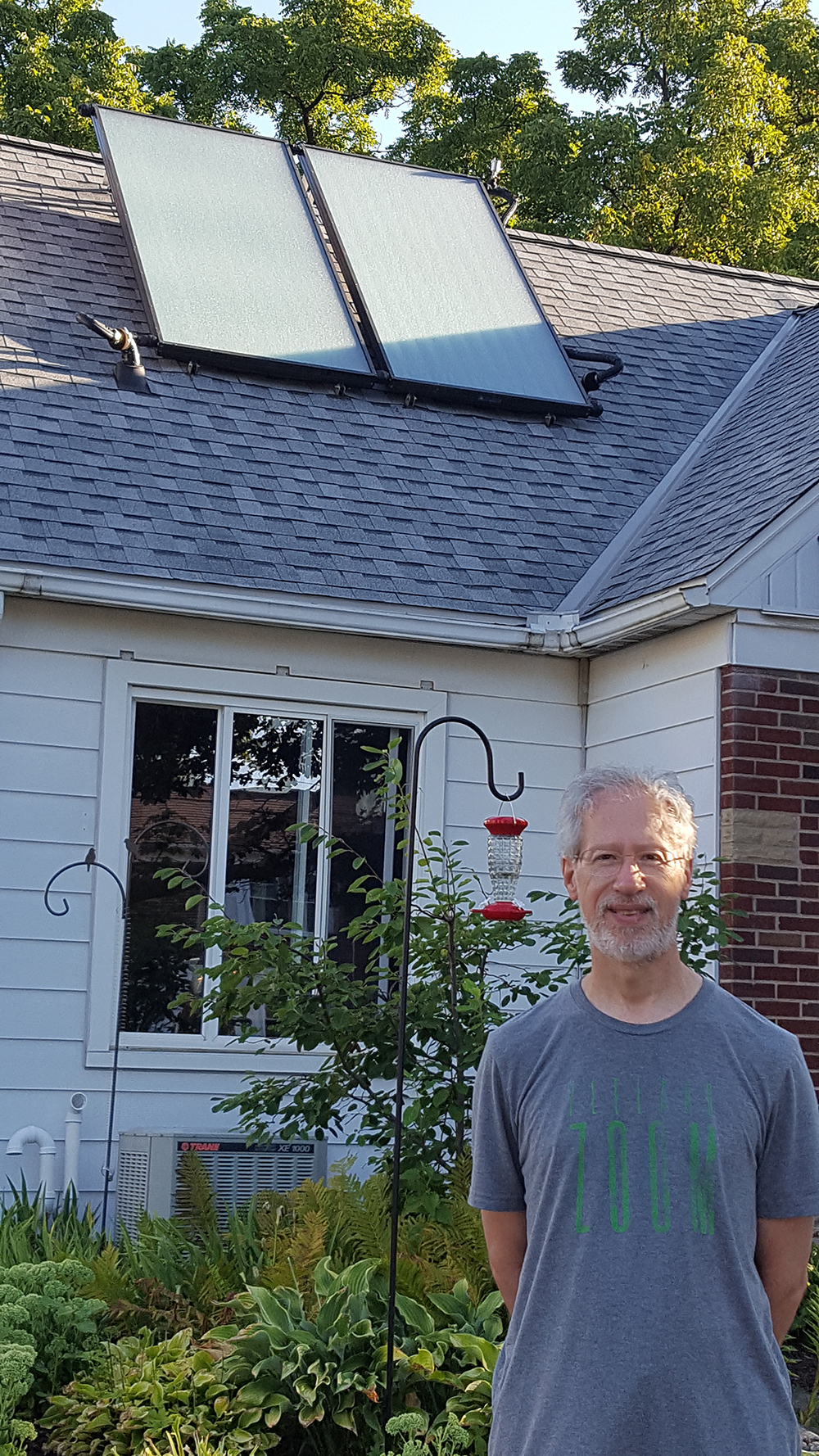 Bob Synk and the solar panels being installed on the roof of his home in Grand Rapids, Michigan, this year. Image: Bob Synk

Despite solar energy costing less than that from a utility company, the seemingly common issue for those interested in converting to solar energy is the high upfront cost of installing solar panels.

“The problem is that you have to pay for it all up front,” Synk said. “But then you’re saving money every month. Most people want to know, ‘What’s the payback time?’ At what point does my monthly saving add up to what I spent?”

Synk said he predicts to meet his payback point in 15 years or less despite having west facing panels that don’t generate as much energy as south facing ones. In general, a payback time of about 10 years is common.

Now may be the best time to invest in solar as cost has gone done significantly over the past ten years and those who make the transition can currently qualify for federal tax credit, Sarver said.

“If you want to help the planet, and your own pocket book, one of the best things you can do is to go solar,” Sarver said. “This year is particularly a good year to go solar because the federal tax credit last year was 30% , this year its 26%, next year its 22% and then its gone for homeowners.”

The Michigan Saves Program is a state sponsored financing program that can be used for these kinds of improvements and that may also be helpful for those looking to make the change, Sarver said.