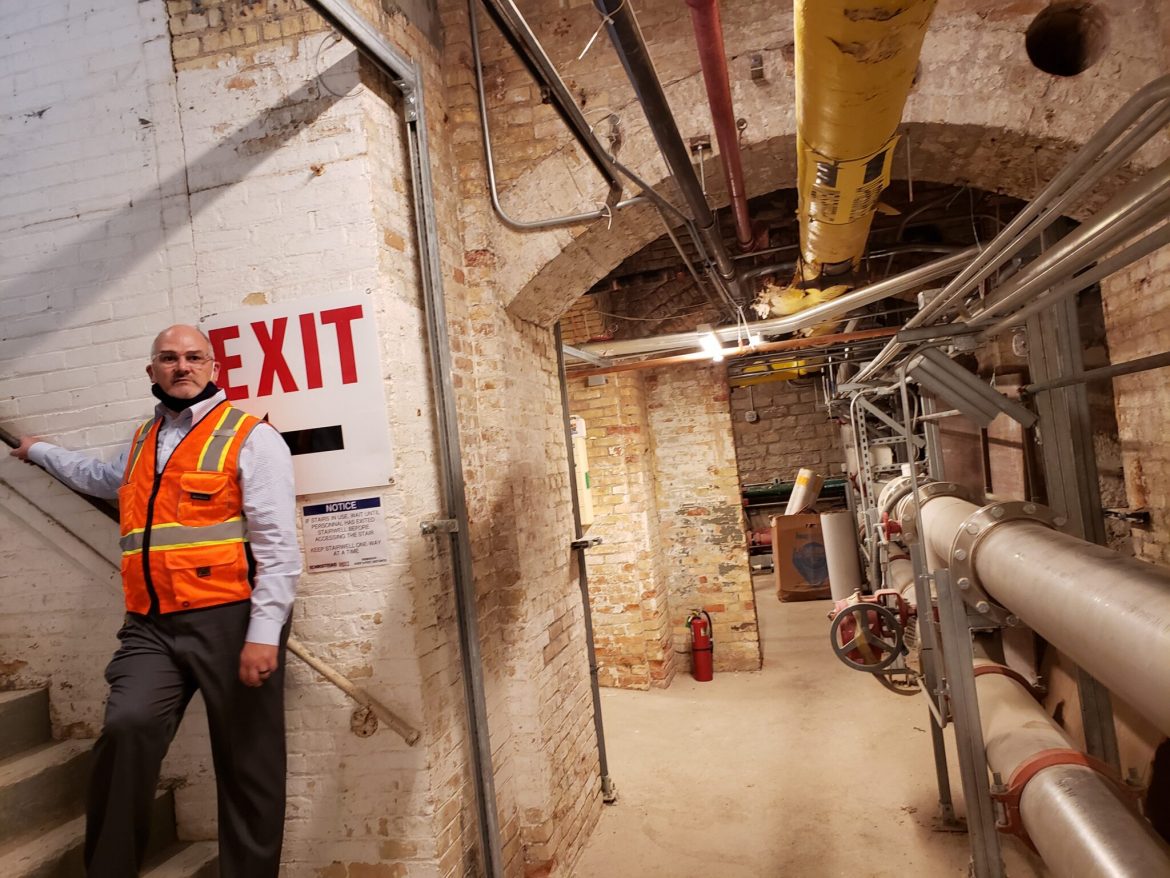 An obscure door tucked beneath one of the massive stone staircases outside of Michigan’s Capitol opens to reveal yet another steep stairwell leading deep below the building’s south side.

“Boiler Room,” say the letters carved long ago into the stone above. It is here where 14-foot boilers 5-feet in diameter were installed during the building’s construction to minimize their threat. 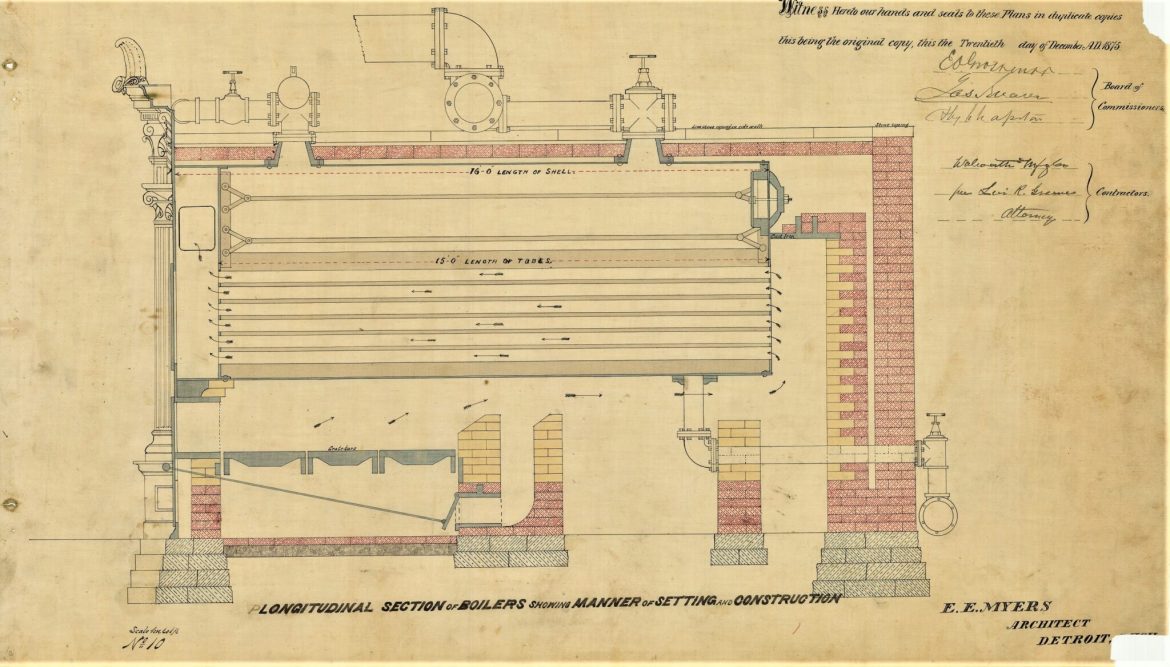 Original architectural drawing of one of the Capitol’s massive boilers. Image: State of Michigan Archives

“The idea was that if the boilers blew accidentally, they would take the steps up but not the whole Capitol,” said Matt Van Acker, the director of tour, education and information services at the Capitol.

“It sure is a cool place to work,” said Rob Blackshaw, as he ducks around valves and through massive pipes like a kid on a jungle gym in what is now known as the Central Utility Plant.

As director of operations for the Michigan State Capitol Commission, Blackshaw oversees a massive upgrade of the 141-year-old building’s heating, cooling, electrical and other mechanical systems. It’s an upgrade that encompasses projects as diverse as installing twin diesel generators to power the building during a power failure and LED lights into historic chandeliers once lit by gas.

Blackshaw jokes that once the upgrade is done, he’ll be able to use his phone to light the domes above the legislative chambers that signal when lawmakers are in session.

But it is a geothermal heating and cooling system that’s getting much of his attention these days. It consists of 272 wells drilled 500 feet below the historic block in Lansing’s downtown that contains the Capitol grounds. Nontoxic glycol will be pumped through the system to capture the constant 55-degree below-ground temperatures to help warm the building in the winter. In the summer, the system will dump heat from the building and into the ground. 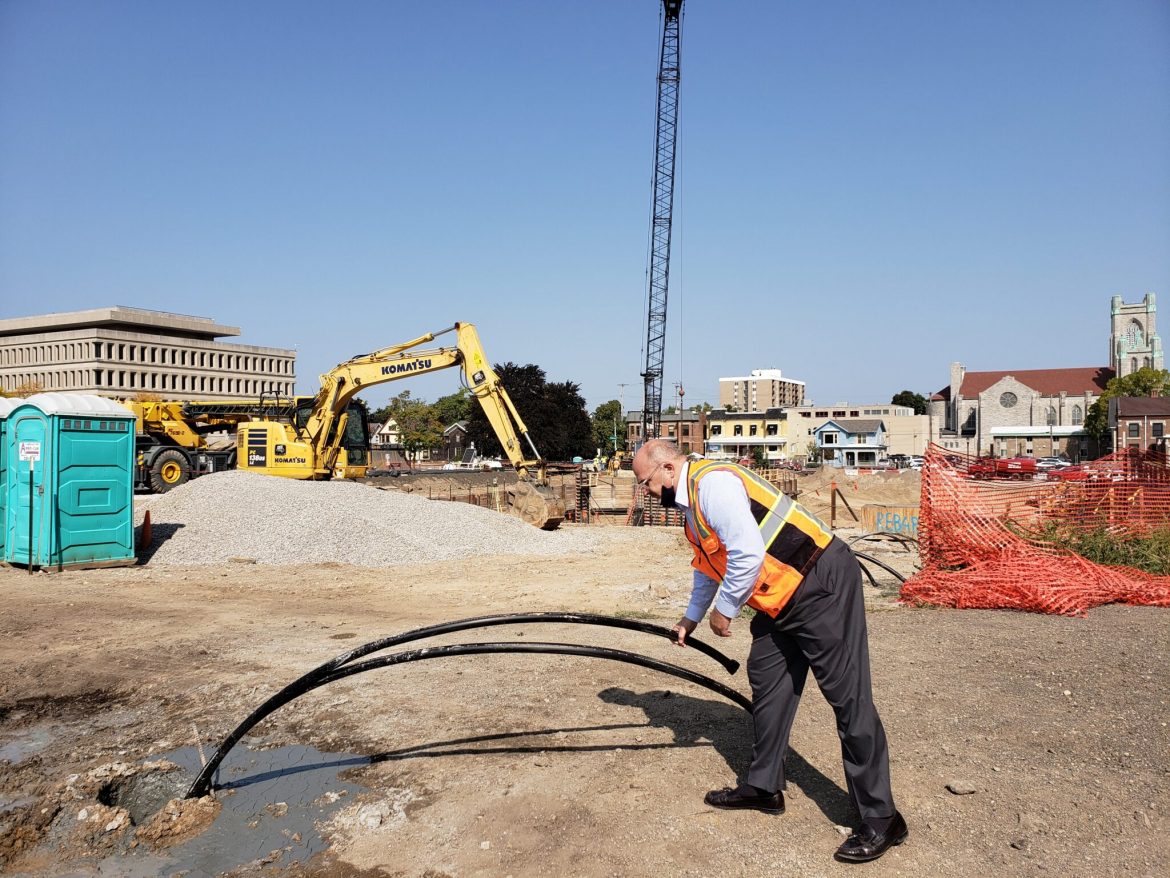 Rob Blackshaw, director of operations of the Michigan State Capitol Commission, examines one of the 272 geothermal wells drilled 500 feet below the Capitol grounds. Image: David Poulson

The project is all the more complex because of a two-story underground building that will cover some of those wells. The first wall for the Heritage Center, which will contain legislative meeting rooms, exhibit space and a welcome center, was poured Sept. 25.

Geothermal installation costs can be high, but the energy savings are significant, said Blackshaw. The new heating and cooling system is expected to save as much as $250,000 of the building’s $800,000 annual utility costs.

“It is sustainable,” he said. “It is better for taxpayer dollars.” He expects to begin using the geothermal system for cooling next summer and heating the following fall.

Construction of the Capitol began in 1872 and was finished at the end of 1878. It received a massive $58 million restoration from 1989 to 1992. That included the restoration of some 9 acres of unique Victorian decorative wall painting and the removal of a rabbit warren of offices stacked on other offices and throughout hallways and stairwells. Mechanical systems were brought up to code.

But that was just a facelift, Blackshaw said. And one subsequent study of the systems that support the building revealed problems not only with energy efficiency but with moisture threatening the restoration. Lawmakers have since appropriated $70 million to address fire prevention, heating, cooling, electrical and other mechanical system upgrades.

Blackshaw leads a walk-through of the building’s mechanical systems with the enthusiasm of a capitol tour guide. But instead of espousing the historic significance of the painted walls, portraits of former governors, Michigan-themed chandeliers and Victorian furniture, he cites examples of forward-thinking engineering.

Among them is the building’s summer ventilation system. Large vents at the ground level funnel air into the building where it cools in a 4.5-foot high subbasement before dispersing above through ventilation shafts since converted to elevator shafts, he explains.

How was that cold air supposed to rise through the building?  About five years ago, workers discovered steam pipes in the ventilation shafts between the fourth and fifth floors. They were puzzled to find them labeled on building plans not as heating pipes but as a mechanism for summer ventilation.

But researchers discovered their function was to warm the air high in the building so that it drew up the cold air below. Workers tagged the now-nonworking pipes as historic artifacts and left them in place. 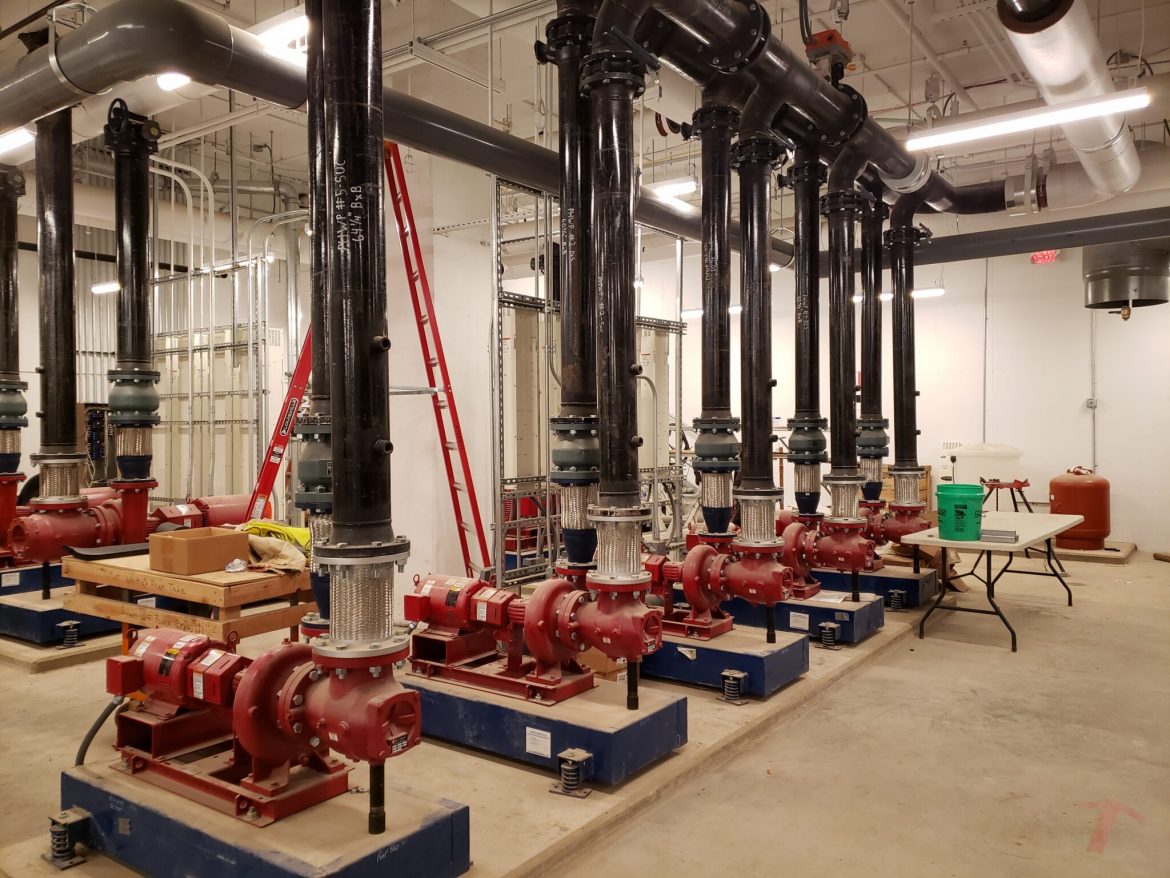 Even the top of the rotunda was designed to be deliberately left open to the outside to create a chimney effect to better move air through the building, Blackshaw said. It was later closed off for fear that the breeze it created would disperse smoke from a fire throughout the building.

You can still feel the breeze when you open the panel that separates the outside from the inside, Blackshaw said.

So, with all that thinking that went into the building’s design, wouldn’t it be most efficient to return it to the way it once was?

“With the (building) code today, it would be impossible to do,” Blackshaw said.

That doesn’t mean the original technology isn’t worthy of respect, he said. One restoration consultant was so impressed with how the building breathed that he plans to return to write a paper about the passive ventilating system of the Michigan Capitol.

“He thought it was neat and clever,” he said.