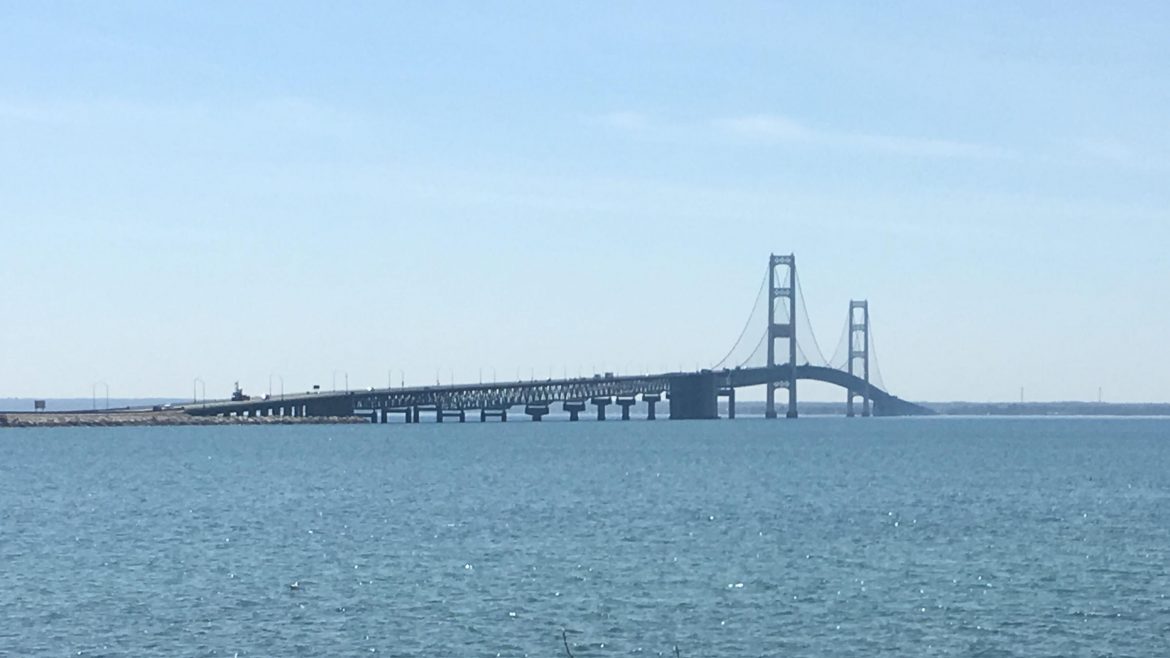 Enbridge’s Line 5, located under the Straits of Mackinac has been the subject of dispute. Image: Amanda Barberena, WKAR-MSU

The COVID-19 pandemic has revealed preexisting energy justice crises like costly utility bills and the dangers of energy pollution, which may not have gained attention otherwise, according to a recent study.

The study, titled ‘The energy crises revealed by COVID: Intersections of Indigeneity, Inequity and health,’ specifically cites rural areas and tribal nations from Michigan, but says that these issues can be seen across the state, the United States, and even globally.

Kathleen Brosemer is the lead author and an energy and environmental policy Ph.D. student at Michigan Technological University. She said she was inspired to write the study when Enbridge Energy brought its permit applications for the Line 5 pipeline to the state of Michigan during the shutdown and she couldn’t participate in the hearing processes.

Brosemer works for a native tribe that strongly opposes the continued operations of Line 5.

“We were discussing all of these crises of energy sovereignty, energy justice, that are being magnified by COVID,” Brosemer said. “And we thought wow, there’s a chance here to get this out, and in this moment when these crises are so apparent, so blatant, they might get some attention.”

Two of the crises outlined in the study regard utilities. One is that not everyone has equal access to utilities. The other is essential services like electricity, water and natural gas are treated as a consumer good which is not affordable for everyone.

Those struggling in the state during the pandemic who received short-term help with utility bills, may still face financial struggles in the long term, said Doug Bessette, a co-author of the study and an assistant professor in the Department of Community Sustainability at Michigan State University’s College of Agriculture and Natural Resources.

On the other hand, Michigan Public Service Commission Chair Dan Scripps said he thinks the state is doing well by taking an aggressive approach in partnering with the Michigan Department of Health and Human Services to create a program that directly pays people’s energy bills with federal dollars under the CARES Act.

But those receiving financial assistance aren’t out of the woods yet, Scripps said.

Utility companies have also seen a loss in revenue due to the moratoriums in place to protect those struggling financially. At some point, these companies will try to recoup their losses. One option would be to increase rates for consumers, that request would have to be approved by the MPSC.

When utility companies file requests the commission will look at not only the additional costs, but also additional savings and revenue in an attempt to take a balanced approach, Scripps said.

“Customers are struggling and asking them to put-up the bill for any additional costs is something that we find pretty challenging, and I think it’s going to be a high bar to clear,” said Scripps.

The study also discusses the environmental injustice crisis in which those exposed to environmental pollution are more susceptible to COVID-19.

“This has been especially problematic in places like Detroit where COVID fatalities and hospitalizations have been higher than average and, of course, where there’s a number of communities that live closer to coal and natural gas fired power plants than elsewhere in the state,” said Bessette.

Scripps said he agrees and has seen this align with racial disparities. The commission is becoming increasingly aware and concerned about environmental justice considerations in their work.

Where Scripps disagrees with the study is the claim of a regulatory process crisis. The study specifically mentions Enbridge’s Line 5 pipeline. It said the company is using divided public attention during the pandemic to push forward permit applications for their plans to drill a tunnel under the Straits of Mackinac.

Those who attended have had better opportunities to speak at online meetings without the added driving time they would usually need, according to Scripps. For the MPSC’s most recent Line 5 hearing, they heard from about 70 individuals on both sides of the issue from across Michigan and out of state.

“My sense is that those numbers suggest that there is meaningful opportunity for public comment and the public’s making use of it,” Scripps said.

But the authors explain that while public comment exists, it has limited influence.

Bessette points out that despite it being easier for some, if you do not have the resources, like WiFi, to participate you cannot engage.

And to become a participant in a contested case, the MPSC requires interested parties apply for intervener status which requires legal representation. The study argues this cost of participation makes it “meaningless” for those like native tribes who cannot afford it.

Those who need assistance with utility bills need to act now before assistance programs close at the end of September, Scripps said. He suggests reaching out to a provider directly, calling 211 or going to the Michigan Public Service Commission website to understand what assistance programs are available.