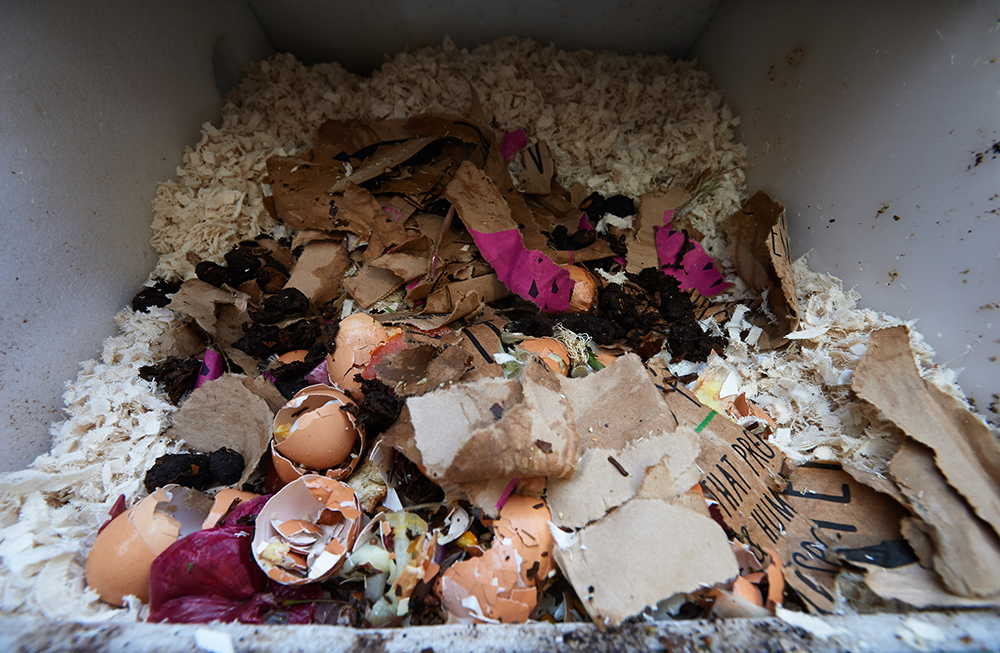 Instead of tossing that old t-shirt, use it to help plants grow.

Just add the shirt to a compost heap. That’s right — It is possible to turn fabric scraps into compost that help plants thrive.

Composting could divert textiles from landfills, said Willa Tsokanis, co-founder of Ego Sum Terra, a textile composting research initiative at the Fashion Institute of Technology in New York City. That’s important because as fabrics decompose in landfills, they release methane, a harmful greenhouse gas connected to climate change, according to the Environmental Protection Agency.

The federal agency reported that U.S. landfills received 11,150 tons of textiles in 2017.

In fact, the clothing and textile industry is responsible for 8% to 10% of the world’s greenhouse gas emissions, according to the United Nations Alliance for Sustainable Fashion.

In April 2017, Markham, Ontario, became the first municipality in North America to ban residents from throwing out textiles, according to the municipality. Instead, residents take their textiles to one of Markham’s textile donation bins, which have diverted about 9 million pounds of textiles from landfills, according to Ontario’s  Resource Productivity and Recovery Authority.

And composting that requires oxygen or bacteria  to recycle clothing produces less methane than landfilled textiles.

But there is little research about composting textiles, said Ericka Leigh, owner of a Tampa eco-friendly accessory company, who successfully composted linen, cotton and silk in an experiment. The Environmental Protection Agency lacks data for how many textiles are composted annually.

It will be difficult to make composting textiles a widespread practice, said Frank Franciosi, executive director at U.S. Composting Council.

“If people were to compost fabrics as a part of the recycling system, it would be really hard to get it to a compost facility to compost it,” Franciosi said. “One of the things that you’d have to really look at would be what the fabrics are made up of. Natural fibers — they would break down. Any kind of artificial or manmade fibers aren’t going to break down.”

Biodegradable fabrics like cotton, silk and wool are compostable. Synthetic fabrics like polyester and spandex are not.

But garments are not typically made up of one material, Tsokanis said. “Especially if they’re cotton — they’ve usually got spandex or something else in them.”

“I wouldn’t recommend (composting fabrics) to someone who doesn’t compost or who doesn’t know much about composting,” said Leigh, who has a master’s degree in sustainability from the University of South Florida. “The clothes take much longer to break down than an apple core or banana peel.”

It took over six months for muslin, a fabric made from cotton, to compost during Tsokanis and co-founder Lydia Baird’s textile composting project.

In 2015, Baird and Tsokanis, both former textile development and marketing students at the Fashion Institute of Technology in New York City, took on a hefty project to transform muslin into compost and use it to benefit plants grown on the institute’s rooftop dye-plant garden.

“We both had this insight seeing how the industry turns resources out like they’re endless,” Tsokanis said. “We thought: ‘There’s all this wasted fabric — it even kind of looks like newspaper that you use in compost. Why don’t we see if we can supplement this?”

Muslin is a staple fabric for fashion designers, used for testing designs before cutting and sewing the final fabric. It typically isn’t recycled and ends up in landfills. By the end of the semester, Tsokanis and Baird gathered 250 pounds of the fabric, Tsokanis said.

Muslin is free from chemicals like dyes and bleaches, making it perfect for composting. Some garments contain dyes that are harmful to soil.

Using a compost tumbler, the pair shredded the muslin scraps and mixed it with organic matter like coffee grinds and leftover food. They combined this method with vermicomposting, or using worms to speed up the composting process, Tsokanis said.

Each batch produced about 33 gallons of compost, Tsokanis said. The pair found the right mixture of materials to produce nutrient-rich compost through trial-and-error.

Although the project is over, it has inspired people, Tsokanis said.

There’s still small-scale composting going on at the institute, said Karen Pearson, chair of Fashion Institute of Technology’s Sustainability Council. “We’re located in Midtown Manhattan, so our ability to have outside agricultural space to do this on a large scale doesn’t exist. So, partners for us are key. This (project) specifically led to continued partnerships and work on campus with textile recycling.”