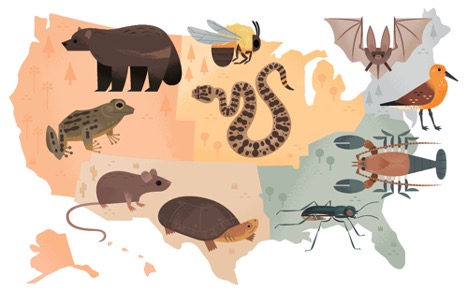 In a time of extreme polarization, a recent study has found something the American public can agree on.

Endangered species deserve protection—and more than they get now.

Responses indicated that the public was much less accepting of risks and losses to endangered species than policymakers and experts.

Tom Offer-Westort, the lead author on the study, was surprised to see how universal the findings were. Even participants that self-identified as politically conservative, gun rights advocates, farmers or ranchers—groups that are often thought to be less supportive of the Endangered Species Act—want significant protections for endangered species, he said.

John Vucetich, a professor at Michigan Technological University and a leader of the Isle Royale Wolf and Moose Project, was also an author on the paper. He was unsurprised by the relative agreement by the public.

“It’s not an uncommon phenomenon for there to be an issue that appears polarizing and controversial, but it actually isn’t,” Vucetich said.

Why the agreement on protecting wildlife?

“I think people just value biodiversity,” Offer-Westort said. “I think people like wild animals. I think they want there to be lots of different kinds of species out there. The idea of that going away is sad and scary, and I think this is a value people share regardless of background.”

Despite this common value, the study also illuminates something the general public, lawmakers, policymakers and experts disagree about:

What counts as an endangered species?

According to the U.S. Endangered Species Act, it’s one that is “in danger of extinction throughout all or a significant portion of its range.”

That seems simple, but those 13 words carry many different interpretations.

The U.S. Fish and Wildlife Service defines a portion of the range of a species to be significant “if the species is not currently endangered or threatened throughout all of its range, but the portion’s contribution to the viability of the species is so important that, without the members in that portion, the species would be in danger of extinction, or likely to become so in the foreseeable future, throughout all of its range.”

With a definition like that, clearly this issue is much more complicated than it may appear.

Many people disagree with the U.S. Fish and Wildlife Service’s interpretation which says the loss of a species’ historical range cannot be the sole basis for listing.

“The Fish and Wildlife Service is perennially trying to look at isolated populations rather than recovery of the species as a whole,” said Bonnie Rice, a senior representative of the Sierra Club’s Greater Yellowstone campaign. Changes to the Endangered Species Act that have taken place during the Trump Administration are especially concerning, she said.

The Americans surveyed by Offer-Westort and his colleagues had a simpler definition of an endangered species. The federal government should step in to protect a species after 21.5% of its historic range is lost, according to the average response of participants. Half of the participants thought the federal government should protect a species after just 10% of its range was lost.

“If the federal government applied the law in that way, many species that are currently endangered, they’d be endangered forever,” Vucetich said.

Having more endangered species would be sad, but it would more accurately reflect the severity of the biodiversity crisis, he said.

Gray wolves are the posterchild for the debate over what counts as an endangered species.

Gray wolves are listed as endangered throughout the Great Lakes region except in Minnesota, where they are threatened, said Georgia Parham, a public affairs officer with the U.S. Fish and Wildlife Service. They were delisted in 2011, only to be put back on the endangered species list in 2014 after a federal court disagreed with the U.S. Fish and Wildlife Service’s interpretation of the Endangered Species Act.

In March of 2019, the federal agency proposed a rule to delist the gray wolf in the lower 48 states, citing a successful recovery of the species. A final decision on their status will be made in the coming months, but first the service will analyze hundreds of public comments, Parham said.

According to the U.S. Fish and Wildlife Service, sound science indicates that the gray wolf has recovered by any and all measures required under the Endangered Species Act.

They question about what counts as an endangered species is not just a question for experts, Offer-Westort said.

“It’s a question for the public, because it isn’t something that’s based on scientific evidence alone. It should stem from what our values are.”

3 thoughts on “Americans agree on animal protection; experts disagree on which ones need it”