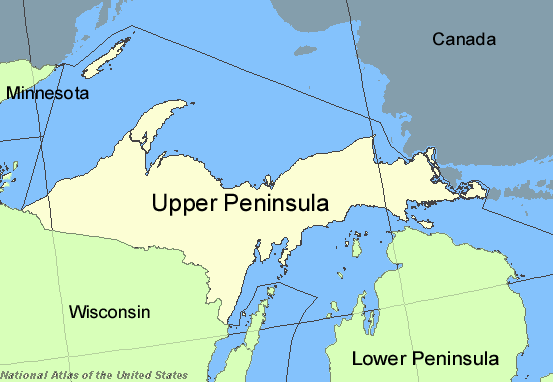 In 1861, 11 Southern states seceded from the Union, triggering a Civil War.

In between, the Upper Peninsula seceded from Michigan as the 51st state of Superior.

But folks “above” the Mackinac Bridge talked a lot about it.

The time was the 1970s when many Yoopers believed that the push to strengthen national and state environmental laws posed an economic threat to the U.P., especially its mining, lumbering and agricultural industries.

“Many residents of the Upper Midwest opposed modern environmentalism for economic reasons,” historian Camden Burd wrote in a soon-to-be published study. His study, “A New ‘State of Superior’: Political Fracture and Anti-Environmentalism in the Upper Midwest,” will appear in the forthcoming book, “The Conservative Heartland: A Political History of the Postwar American Midwest.” (University Press of Kansas).

The most prominent face of the movement was Rep. Dominic Jacobetti, who called for the U.P. to cut its political ties to Lower Michigan and form its own state named “Superior.”

Jacobetti, a conservative Democrat from Negaunee, was an ex-miner and former union leader who later rose to the second-most powerful position in the House, chair of the Appropriations Committee.

Mining was especially hard hit by competition from Western mines and cheap imported steel, while the number of farms had plunged by almost 50% in a decade, according to Burd, who is now a post-doctoral fellow at the New York Botanical Garden and earned his master’s degree at Central Michigan University.

Burd, who grew up in Grand Rapids, said he researched the topic because “I was fascinated by the perception that the U.P. is sort of a separate place and wanting to study the cultural landscapes and definitions of place.”

Jacobetti argued that more political autonomy would let U.P. residents “manage our natural resources as we see fit for the best interest of everyone concerned.”

“The movement became so popular that he soon made T-shirts and gave speeches calling on those in Michigan’s U.P. to support his imagined ‘Superior,’” the study said.

Interestingly, the movement of the 1970s had deep roots in the past, said Dan Truckey, the director of the Beaumier Upper Peninsula Heritage Center at Northern Michigan University. Last October the center opened an exhibition, “The 51st State,” which is available online in digitized form.

The exhibition explores the differences between the two peninsulas, as well as cultural and economic realities of statehood in the 21st century, according to the center.

“It really begins with how the U.P. became part of Michigan,” Truckey said, referring to an 1830s deal that gave it to Michigan Territory, while Michigan Territory gave up its claim to the so-called “Toledo Strip” along the Ohio border. The deal cleared the way for Michigan’s statehood in 1837.

“The surprise was how common the idea [of a separate state for the U.P.] was in the 19th century,” he said. “There were serious efforts by the businesspeople in every county. They had conventions every 10 years to push the idea.”

As Burd noted, however, at the same time Jacobetti was pushing a break-up of the state, anti-secessionists – including environmental groups and other politicians – countered that stronger environmental laws would benefit the U.P. economy by drawing tourists and outdoor recreationists.

One of them was U.S. Sen. Phil Hart, D-Michigan, who first introduced a bill in 1961 to create Pictured Rocks National Lakeshore.

Jacobetti criticized the park proposal. As Burd wrote, “Though he knew tourism to be an important part of the region’s economy, he hesitated to support any legislation that called for further protection of natural spaces.”

Critics of the break-away proposal also questioned the economic viability of a separate U.P. state, including inadequate funding for hospitals and roads, fewer public services and a drop in the number of Lower Peninsula students enrolled in the U.P.’s three state universities.

If the U.P. did break away, it would have the smallest population of any state.

“Although Jacobetti’s movement ultimately lost steam in the late 1970s” – and he fell from political power in Lansing due to a legislative corruption scandal in the mid-1990s – “the political movement for U.P. statehood never truly disappeared,” Burd wrote. “The secessionist spirit reappears every few years.”

The Marquette County Board of Commissioners discussed the issue in 2012, but Truckey called it “hardly a discussion – more of an off-hand comment blown out of proportion.”

Burd said the U.P. separatist drive fits into a broader U.S. history of secessionist movements, which mostly focuses on the West. “Parts of California are always trying to secede from the rest of California.”

And earlier this year, some Southeast Oregon conservatives petitioned to allow their rural counties to leave the politically liberal state by moving its border and becoming part of Idaho.

One thought on “Remembering the UP’s break-away movement”