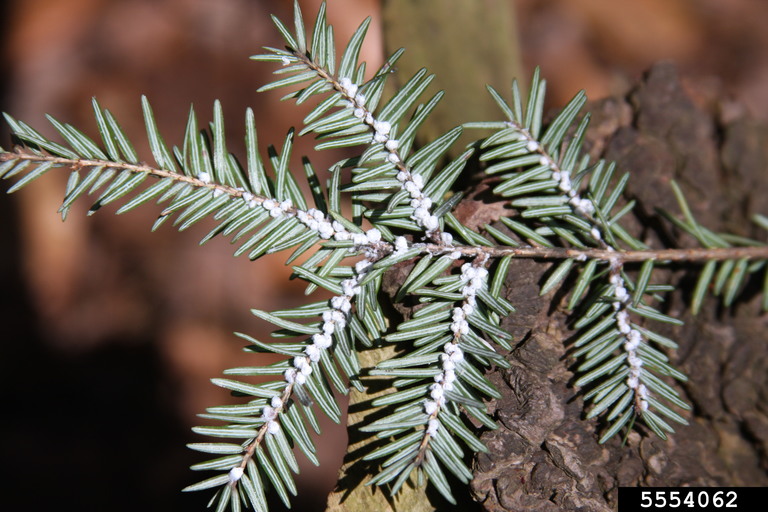 Distinctive white egg sacks of hemlock woolly adelgid at the base of hemlock needles. A new infestation of the invasive insect was recently found in Michigan’s Mason County. Image: Steven Katovich, Bugwood.org

Little white fluffballs popping up on tree branches might not seem so lethal.

But for hemlock trees, they can be a death sentence. The white balls are ovisacs, or egg sacks. The insects that deposit them are hemlock woolly adelgid — a tiny, invasive creature that siphons nutrients from hemlock tree branches.

The Michigan Department of Natural Resources detected a new infestation of hemlock woolly adelgid in southern Mason County in early March. This area is outside the pockets of trees already damaged by the insect in Allegan, Muskegon, Oceana and Ottawa counties.

The DNR found it right on the cusp of the invader’s breeding season. The species thrives in February and March, feeding on hemlock tree sap. The more they feed, the more they secrete a white, wax-like substance that becomes those white balls. In the spring, they lay eggs in these, which usually hatch in April, according to the U.S. Forest Service.

“It’ll feed on the needles of the hemlock tree,” said James Wieferich, a DNR forest health specialist. “It’ll suck up a bunch of the nutrients in the reserves of those needles, weakening the tree over time.”

That causes hemlock trees to have an allergic-like reaction. They respond by trying to shed their needles to get rid of the problem.

“It’s what usually leads to mortality in these hemlock trees,” Wieferich said.

“Normally, that leads to mortality in about four to 10 years, so it’s not very sudden,” Wieferich said. “You usually see gradual decline in the tree over the years as the infestation grows on that tree.”

The insect took a significant toll on Eastern and Carolina hemlock in 1951, when it was introduced to the eastern United States. It reached the Midwest, where hemlock tree mortality has increased in Pennsylvania and parts of Ohio “over the last couple of decades,” Wieferich said.

When the invasive insect was found in Michigan in 2006, the DNR had one goal: eradication. Quarantine and treatment programs have been carried out in Emmet, Berrien and Macomb counties. The DNR reports the invader has been scrubbed from them.

Quarantining infected hemlocks is sometimes crucial to containing hemlock woolly adelgid, according to David Smitley, an entomology professor at Michigan State University. The Michigan Department of Agriculture and Rural Development, or MDARD, plans to expand quarantines already in-place on hemlock trees to the newly-detected areas in Mason County.

“Quarantine is designed to avoid nurseries and Christmas tree growers from transporting infested trees from infested counties to non-infested counties,” said Smitley, who is also a pest management expert for MSU Extension.

But hemlock woolly adelgid is a tricky pest, Wieferich said. It’s different from a lot of insects that come through Michigan, in that it thrives because it overwinters and waits out colder months. Because of that, one of the most important times to be conscious of the insect’s dispersal pattern is in spring.

That’s when the insects — despite quarantine or eradication efforts — could be hitching a ride with humans, Wieferich said.

“The spring is the time when people could actually be moving around HWA,” Wieferich said. “They want to avoid moving firewood, hemlock branches off property, even if they’re just dumping it at a township dump.”

Landowners should keep these materials on their property so they’re not spreading the insects, even if they’re not sure they have them, Wieferich said.

“Another thing to be cognizant of is if you’re going to a state park, you’re not going to want to park your trailer or vehicle in hemlock bushes in the spring, because you might be transporting HWA around the state when you leave,” Wieferich said.

Public or private landowners with hemlock trees that sport waxy, woolen puffs should call state agricultural officials for treatment, Smitley said. After confirmation of an infestation, hemlocks are usually treated by applying insecticide in a soil drench at the base of the tree.

“If homeowners find hemlock woolly adelgid outside of one of the known areas of infestation in Michigan, it would be helpful to let the Department of Agriculture and Rural Development know,” Smitley said.

A department hotline and email address to report sightings can be found on the Michigan Invasive Species website.