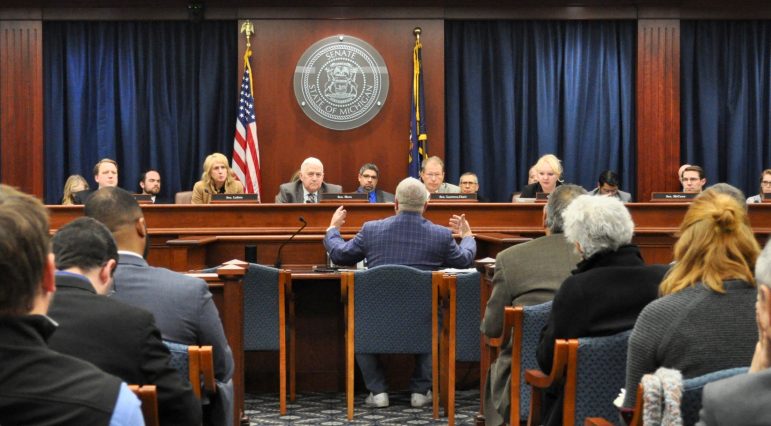 LANSING: Michigan lawmakers on Tuesday will consider legislation to let people sell more solar and other alternative energy to utilities.

In 2008, lawmakers capped sales of renewable energy at 1% of a utility’s total energy at its average peak demand. The intention was to stimulate investment in solar, but ensure that it was manageable, said Renze Hoeksema, DTE’s vice president of corporate and government affairs.

DTE opposes removing the cap because the utility’s cost of implementing solar is not equivalent to what is returned for those costs, he said. If people had a true representation of the benefit of the energy produced, and when it was produced, a cap would probably not be needed.

Solar producers want a further subsidy after the cap is reached rather than looking at the true costs, Hoeksema said.

Consumers Energy, the state’s other large utility, also opposes removing the cap as not in the best interests of all of its customers, especially those of low and fixed income.

But supporters at the hearings said removing the cap is needed to fight greenhouse gases that cause climate change and stimulate related energy businesses.

“By buying an electric car, all you’ve done is transfer your carbon footprint from your tailpipe to the utility’s energy plant,” said Lisa Patrell, co-founder of Washtenaw 350, a chapter of the national climate change organization 350.org. “The only way to truly make a reduction in that carbon footprint is to be assured that your electrical vehicles are being recharged from a green renewable source.”

Failing to remove the cap will dramatically cut Michigan’s solar job growth, said Jordan Tallman, director of business development for Harvest Solar, who has worked in solar in Colorado, California and Michigan for 10 years.

It would dramatically affect their business and they would potentially have to reallocate employees to other states that are more solar friendly, Tallman said.

“There’s over 5,000 jobs in Michigan that are solar specific and that would dramatically reduce the overall jobs that are available here,” he said.

Utility officials say it isn’t an easy change. Financing solar is a multi-year commitment and not a simple financial transaction, they say. And you don’t have to build solar to invest in it. DTE’s MIGreenPower initiative allows individuals to invest in solar and wind without altering their homes.

“And when you make that decision, what you can be assured of is you’re taking on the cost of making an investment in a real asset,” Hoeksema said. “You’re not asking any other customers to in some way compensate you for making that investment.”

That way, customers who invest in solar will pay their fair share, he said.

DTE is not expected to reach the cap for another three years, Hoeksema said. The company intends to remain responsive to people who want to install rooftop solar or other alternative energy.

But without the cap removed, businesses and homeowners wanting to switch to fully installing solar will have to go off-grid, which most people cannot manage, Laura Sherman, president of the Michigan Energy Innovation Business Council, recently told the Michigan Senate Committee on Energy and Technology.

Once the cap is reached, the approval of the utilities is needed to have a solar system on your house that can send power to the grid, she said.

The bills are important for addressing climate change, the nation’s most complex environmental problem, Mike Berkowitz, a representative of the Sierra Club’s Beyond Coal Campaign, testified at one recent hearing.

It impacts everybody, and it has a disproportionate impact on people of diverse race and income, he said.  “We feel like it is a civil right to be able to create your own energy and not be dependent on a corporate monopoly utility company.”

Others point to economic consequences.

Jayson Waller, the chief executive officer and co-founder of Power Home Solar, said his company has flourishing offices in Ohio, Pennsylvania, Indiana and Illinois. Michigan is its top market, but the cap would eliminate almost 300 jobs at his company, he told lawmakers.

Removing the cap would not change safety requirements and regulations required to install renewable energy, but would increase the electricity costs of any customers under utility energy plans.

Consumers Energy announced recently that by 2040 it intends to eliminate the carbon impact of the electricity created or purchased by customers. This Net-Zero vision has been made possible by the dramatic advancements in technology, testified Brandon Hofmeister, senior vice president of governmental, regulatory and public affairs for CMS Energy and Consumers Energy.

The old billing system of net metering used to credit energy system owners for the energy they added to the grid. Hofmeister said moving back to net metering would not be right for Michigan.

“It might promote clean energy,” Hofmeister said, “but it would do so at the cost of some of the other key pillars of the 2016 energy law, namely affordability and fairness in pricing, as well as potentially reliability.”

The Senate Committee on Energy and Technology is accepting more testimony on Tuesday. A vote has not been scheduled.

Note: This story was edited March 2, 2020, to more accurately reflect the perspective of  Harvest Solar.