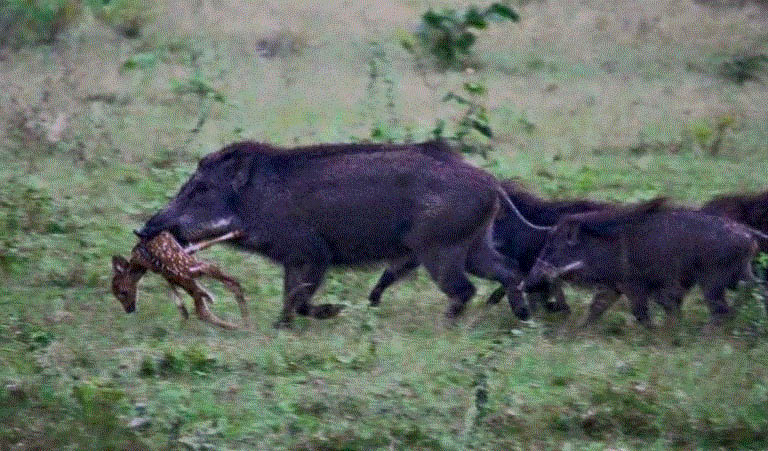 In 2011, the Michigan Department of Natural Resources (DNR) declared feral swine to be an invasive species and banned their possession.

Since then the population has steadily fallen, due to the ban and to hunting.

While the total number has gone down, the threat of diseases and agricultural damage persists, according to Shaun McKeon of the Michigan United Conservation Clubs. McKeon spearheads MUCC’s education and outreach about feral swine.

“They’re harmful to agriculture and general forest health. They’re pretty destructive as far as the amount of food that they eat and the game species and the non-game species that they impact and compete with,” McKeon said.

“They also are pigs, and pigs can spread diseases that can jump to humans pretty easily, so there’s always that kind of disease worry,” he said.

Feral swine can host parasites and diseases that can transfer to humans, livestock and wildlife. While the transfer of diseases from pigs to humans is rare, diseases such as influenza A and foot and mouth disease can still spread.

“We work really hard to make our pigs healthier and keep them healthy,” said Mary Kelpinski, the chief executive officer of the Michigan Pork Producers Association, based in East Lansing.

“We have changed the way we raised pigs. Now most of the pigs are raised indoors, so we can block access to feral pigs. The pigs running at large are disease vectors to the domestic flocks,” she said.

African swine fever has wiped out nearly one-quarter of the world’s population of swine, increasing the price of pork and causing Michigan’s yearly total exports of soybeans for pig feed to fall, according to the Michigan Economic Development Corp.

The disease can be caught from infected wild animals.

“Many of the countries dealing with African swine fever have identified it in their feral pig populations,” Kelpinski said. No cases have been reported in the $500-million-a-year hog industry in Michigan.

Controlling a disease in wild pigs is difficult, she said.

Some farmers build a wall around their farms. “Unfortunately, research shows pigs can usually find a way up, under or over most walls,” she said.

Feral pigs have been reported in 70 of Michigan’s 83 counties. 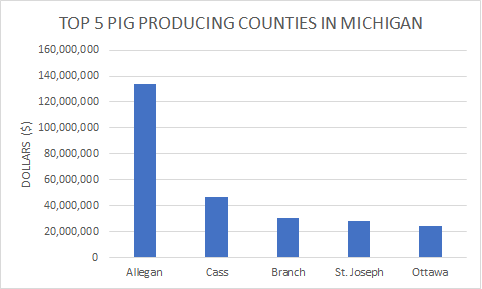 “Back in 2011, there was a coalition of people working to get that invasive species order passed,” McKeon said.

“Conservation organizations, as well as the pork industry and its lobby groups, made sure to get ahead of the game, compared to states down south that have major problems with feral swine populations, like Texas and Alabama,” McKeon said. “They’re almost impossible to get rid of because they’re so many running around their state now.”

One way for farmers to protect their swine is to improve their biological security.

“We’ve tried to eliminate all the feral swine we’ve found out there,” Kelpinski said. “They’re extremely smart animals and they’re nocturnal, so many people don’t see them and realize that we do have a problem with them. It’s not as big as it was, but we really want to monitor it so it doesn’t spring back.”

Hunters with a deer hunting license can kill wild pigs. The DNR has been researching and tracking them. People who see signs of them or kill one can report to the U.S. Department of Agriculture Wildlife Services at 517-336-1928.