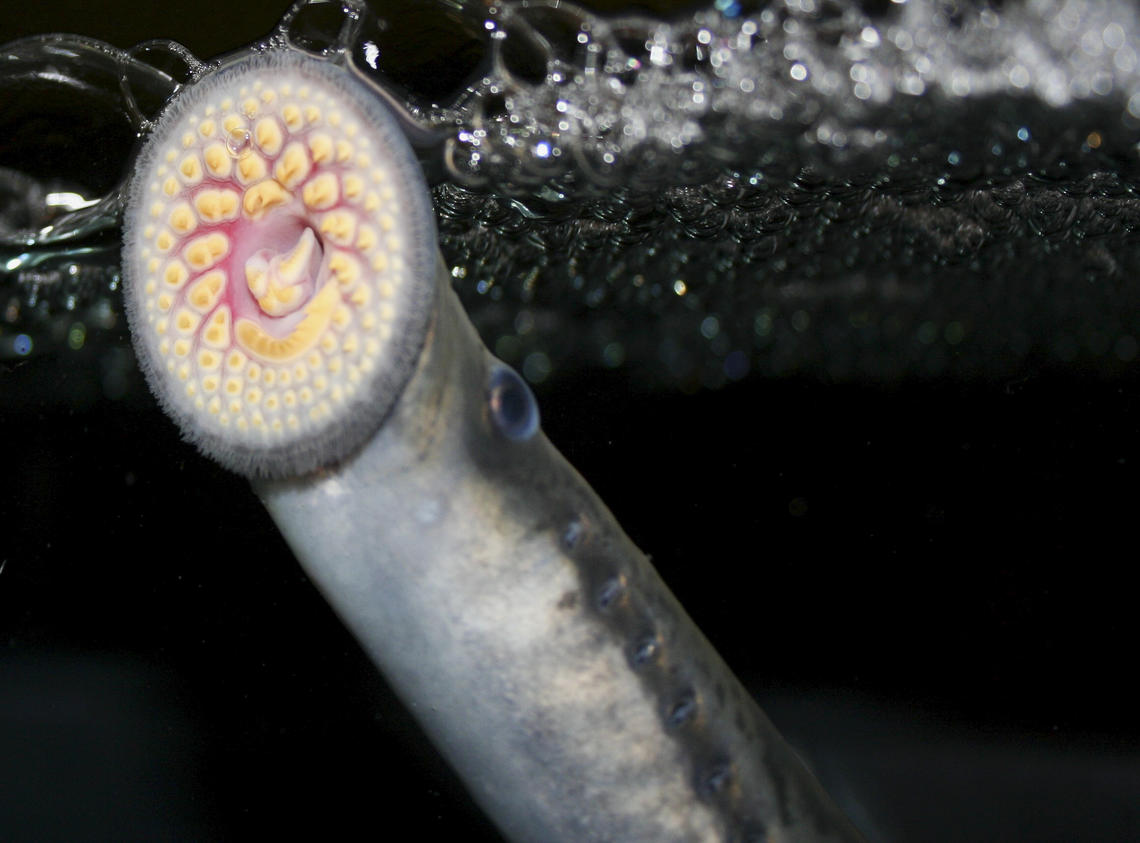 Invasive species like the sea lamprey could be blocked, while allowing native species to pass through. Image: United States Geological Survey

A $20 million test facility used to find how to keep undesirable fish from moving upstream without using a dam is coming to Michigan’s Boardman River.

“I don’t think I’m over exaggerating when I say I think this could help solve a global problem,” said Marc Gaden, communications director for the Great Lakes Fishery Commission.

The FishPass system will feature one channel for scientists and engineers to experiment with ways to keep undesirable fish out, while allowing desirable ones in. Another channel acts as a control. Researchers will monitor which species of fish pass each channel, telling them which sorting methods are the most effective.

The idea is to find a way to block undesirable species without a physical barrier like a dam. While dams block harmful invasive species, they also restrict movement of native species, which limits their reproduction potential, Gaden said. 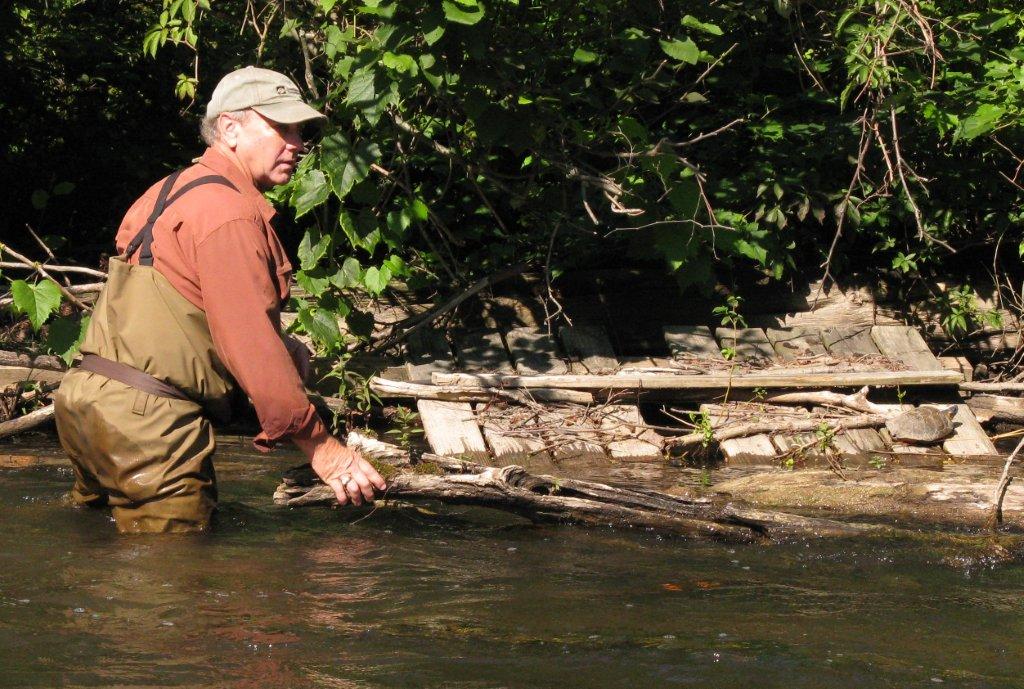 River revival: How the Boardman River became the ideal home for FishPass

The channels will be in downtown Traverse City, downstream from a new dam, so undesirable fish won’t invade the Boardman during testing.

The Great Lakes Fishery Commission will lead the project. It is funded mostly by the federal Great Lakes Restoration Initiative with other agencies contributing.

Scientists and engineers will propose ideas to be tested at FishPass, Gaden said.

Water velocity barriers, light guidance, video shape recognition and eel ladder style traps are some technologies that could be used, according to the fishery commission.

“Right now, what that technology is or what those methods are is only limited by the imagination of scientists and engineers who we’re going to be working with,” Gaden said.

One method that has been explored at universities and is expected to be tested at the site is pheromone trapping, said Nate Winkler, a biologist with Conservation Resource Alliance, a nonprofit environmental organization in Michigan’s northwest Lower Peninsula. 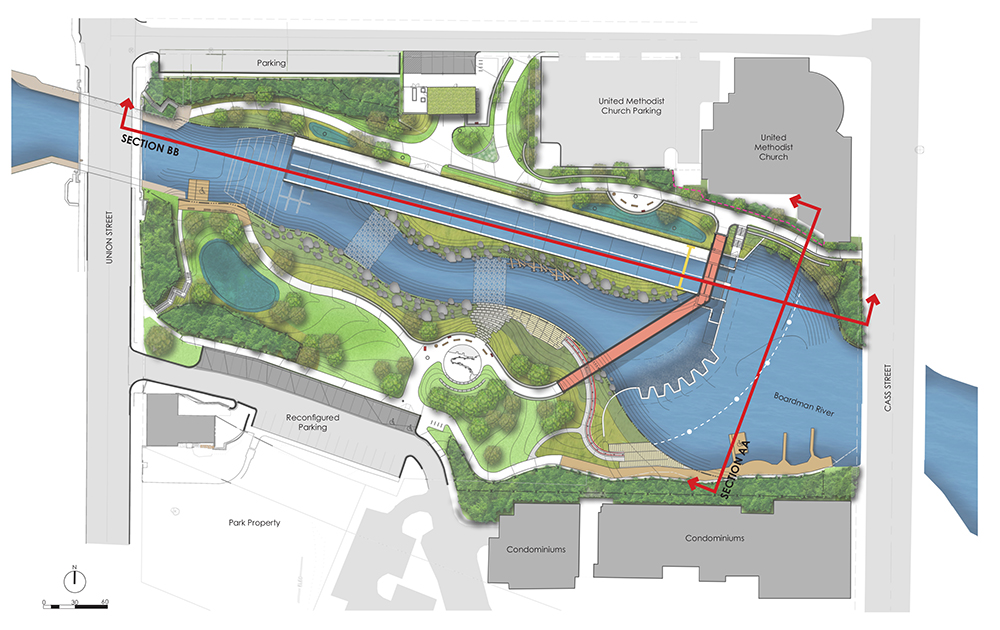 “That’s exposing a side channel to a sex pheromone to attract males or females into that channel and it’s a dead end, then you trap them,” Winkler said. Invasive species, like Asian carp and sea lamprey, that are capable of decimating native fish populations are obvious candidates to be blocked. But what qualifies as desirable and undesirable can become controversial, Winkler said.

In the Boardman, coho salmon and steelhead are popular for commercial fishing but are non-native and use resources, hurting native species, Winkler said. Fishery managers will have to decide whether to block these species as well.

If a successful sorting method is developed, it could boost native fish populations, Winkler said.

Removing dams and allowing native species access to their full streams give them more space to reproduce and cuts down on competition. This also provides an opportunity to re-introduce native species that died out in rivers, Winkler said.

Grayling were run out of the Boardman River by overfishing, exploitation of their habitat by logging and competition from non-native fish. If FishPass is successful, they could be reintroduced to the Boardman, Winkler said.

While testing costs are high, as the technology is established and refined, sorting methods will become cheaper. Lower costs will allow these sorting methods to be used globally, Winkler said.

“That’s the key,” Winkler said. “To make it available to other scientists and managers in other parts of the world, so they can use that silver bullet in their own instances.”

A decades long restoration effort on the river, a diverse population of aquatic species occupying the river and support from Traverse City officials acted as main incentives to bring FishPass to the Boardman, Gaden said.

Part of the Boardman’s restoration was taking out four dams on the river’s main waterway.

“[The dams] were aging and becoming unsafe, no longer producing valuable or reasonably priced energy, so they had essentially become a safety concern and a maintenance cost,” said Amy Beyer, who led a project management team for dam removal on the Boardman and is the director of Conservation Resource Alliance.

While removing the dams had benefits, there was also the risk that without any barriers, sea lamprey would spread throughout the Boardman and decimate fish populations, Gaden said.

The final dam, the Union Street Dam in downtown Traverse City, is scheduled to be taken out in the spring. FishPass construction will take place at the vacant location following the removal.

A new park with observation ports will be built nearby. People are encouraged to watch the testing take place and talk to scientists.

“We’ve been very cognitive of the fact that it is a living laboratory,” Gaden said.

FishPass could even act as a tourist attraction.

“I feel like it’s going to be an attraction to locals and non-residents alike, to be able to observe science in action,” Winkler said.”

While local benefits will occur quickly, testing is anticipated to be a long process.

Construction of FishPass should take around a year, finishing in spring or summer 2021. After that, it should take five to 10 years for results to be drawn, Gaden said.