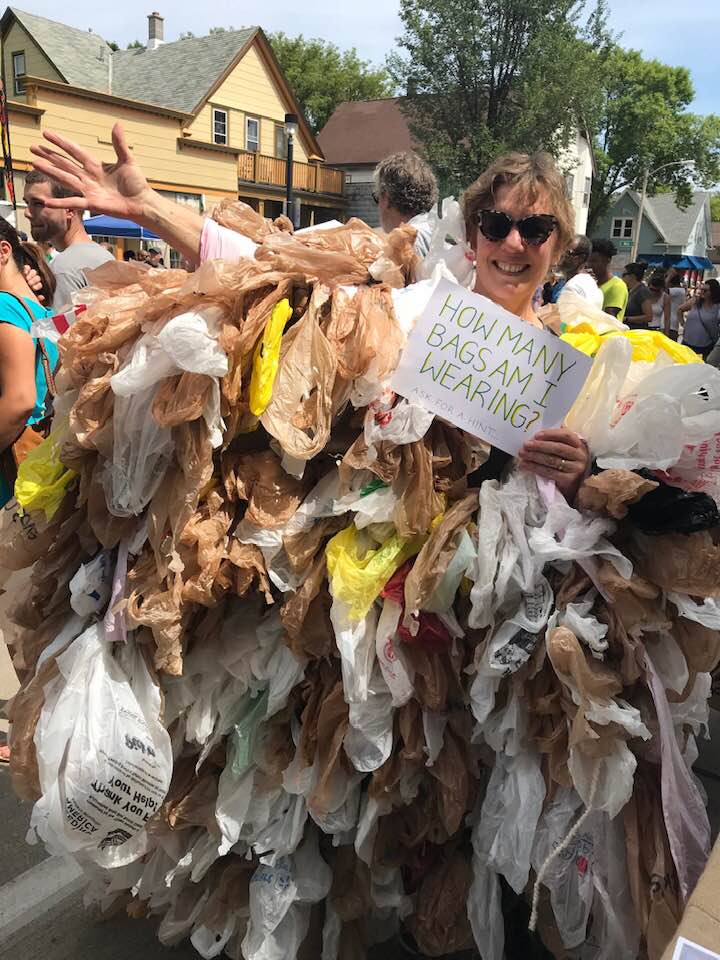 A Plastic-Free MKE volunteer wearing our “Plastic Bag Monster” costume at a local event. The costume is made of 500 plastic bags, which is the number the average American uses each year. Image: Anna Ostermeier

Editor’s note: This is the second of two stories exploring the effects of polystyrene on the environment, organizations fighting to ban it and companies adapting environment-friendly alternatives.

Dunkin’ Donuts recently announced it will phase out the use of polystyrene foam cups by April and replace them with double-walled paper cups.

The decision got some backlash from people who use the foam cups as an insulated sleeve for iced coffee. Others were upset because they thought the foam cups were iconic.  Dunkin Donuts attempted to get them on board, noting in a tweet that the practice is unsustainable.

They didn’t get the response they wanted: some people vowed to never drink at Dunkin Donuts again.

Others tried to stock up on the foam cups before they were gone at a Dunkin’ Donuts in Boston. And others called the company out for pretending this is an environmental issue. Amy Pennington tweeted that the cups will end up in a landfill because Dunkin Donuts doesn’t have recycling bins.

Out with the old, in with the new, Dunkin Donuts new double wall cups will replace their iconic foam cups.

Not every company is criticized for such a decision. In fact, some are thrive after eliminating polystyrene foam packaging.

One successful effort comes from a coalition of environmentalists in Milwaukee that helps companies rid their businesses of polystyrene waste.

Plastic-Free MKE is made up of residents, small business owners, government agencies and local non-profit groups with a mission to reduce single use plastic, including polystyrene, to keep Lake Michigan clean. 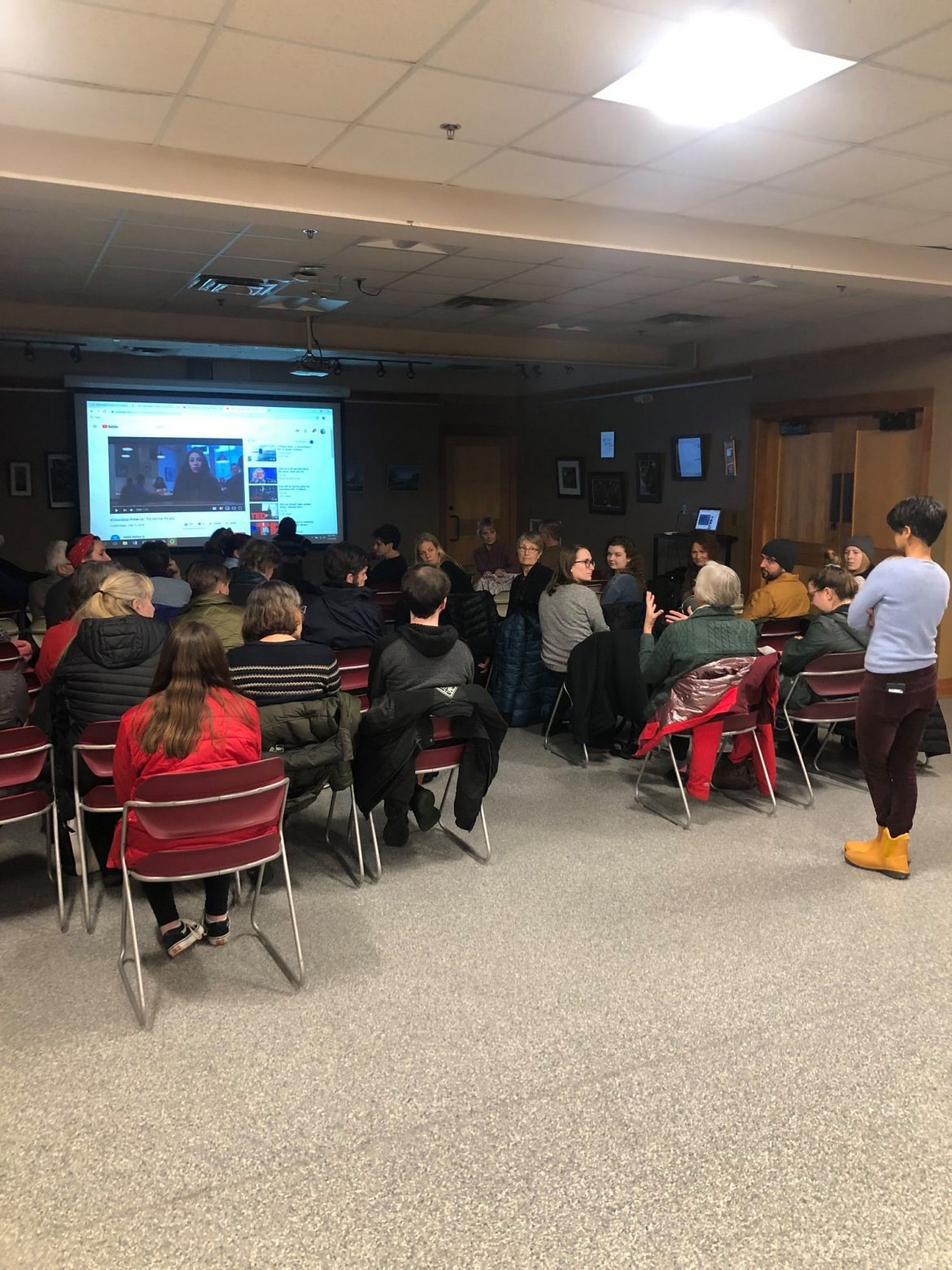 A snapshot of the Plastic-Free MKE December public meeting, where they watched a few short films and had a discussion. Image: Anna Ostermeier

This coalition was created in 2014 because of the increasing amount of plastic found in the lake over the past decade, said Anna Ostermeier, the volunteer coordinator of the coalition.

More than 22 million pounds of plastic pollutes the Great Lakes each year, according to the Alliance for Great Lakes. For Plastic-Free MKE says it is important that Milwaukee does its part to decrease that number. One of their biggest success was getting companies to move away from using the packaging, Ostermeier said.

“Polystyrene foam, the generic name for Styrofoam, is a petroleum-based plastic and has been cited to cause both environmental and health issues,” Ostermeier said. “It also can take centuries to break down.  Banning polystyrene should be federally mandated.”

Although the U.S. Food and Drug Administration regulates all food packaging and has allowed polystyrene, it acknowledges that small amounts of it can stick to consumers’ food. This amount is way lower than the limits for causing problems. Yet, there are research and studies that show that it still can negatively impact your health and the environment, Ostermeier said.

“There is no reason for polystyrene to still be used. That’s why we have a zero tolerance usage for businesses that want to be certified,” Ostermeier said.

Businesses receive a Lake Friendly Certification from the group when that shows consumers that they’ve are committed to sustainability. 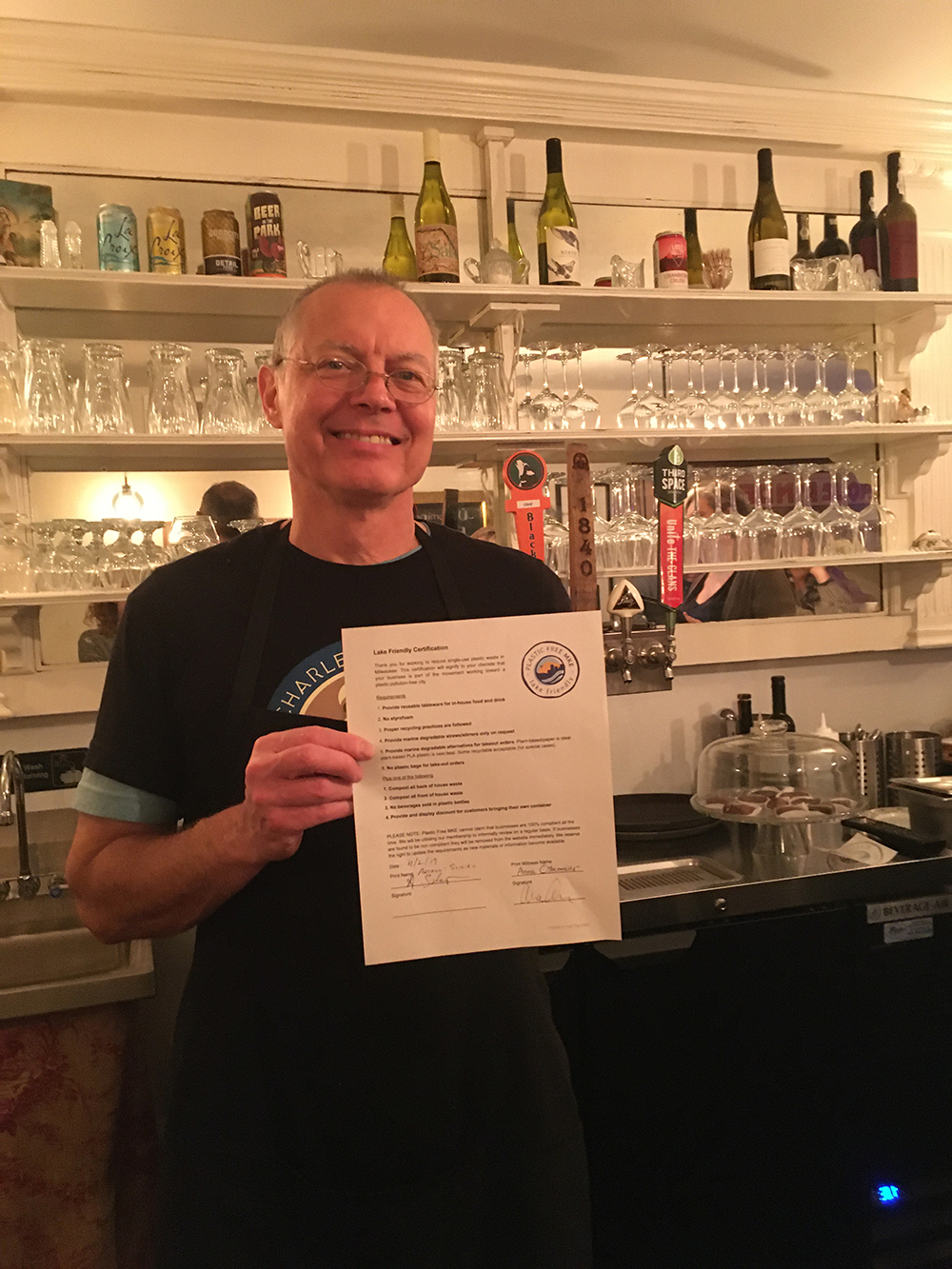 Providing compostable options for to-go orders and eliminating polystyrene completely are among the actions needed for certification, according to the coalition’s website. While it was possible for some businesses, others have run into problems, Ostermeier said.

Certified businesses must also provide reusable tableware, and compostable straws and stirrers only on request.

One of the biggest challenges for businesses is the cost, Ostermeier said.

“Polystyrene is cheap because its costs are externalized,” she said. “We feel those costs in our community, our lakes and wildlife.”

There’s also the cost to health, Ostermeier said. Polystyrene is made of styrene, a carcinogen that irritates the skin, eyes, upper respiratory tract and the gastrointestinal tract, according to the U.S. Department of Health and Human Services and the International Agency for Research on Cancer. Prolonged exposure or the heating of polystyrene can release the toxic substances.

Many cities, including New York City and Minneapolis, have banned polystyrene foam in foodservice products. The Greenhouse Tavern in Cleveland is Ohio’s first green restaurant.

“It was part of the original concept of the restaurant to be green,” Brian Zipper, a manager at the restaurant, said. “We used refurbished material in building and I’ve never seen any Styrofoam on the property.”

The only true consequence of not using polystyrene foam containers is that other materials cost more, Zipper said. Polystyrene is cheap to produce, easy for manufacturers to ship, and highly durable, compared to some packaging. Yet, many customers are willing to pay the higher costs when they realize why it costs more, Ostermeier said.

“Mostly it is about educating the customers why the price is going up,” Ostermeier said. “And when they understand that, they are more willing to pay the price.”’ 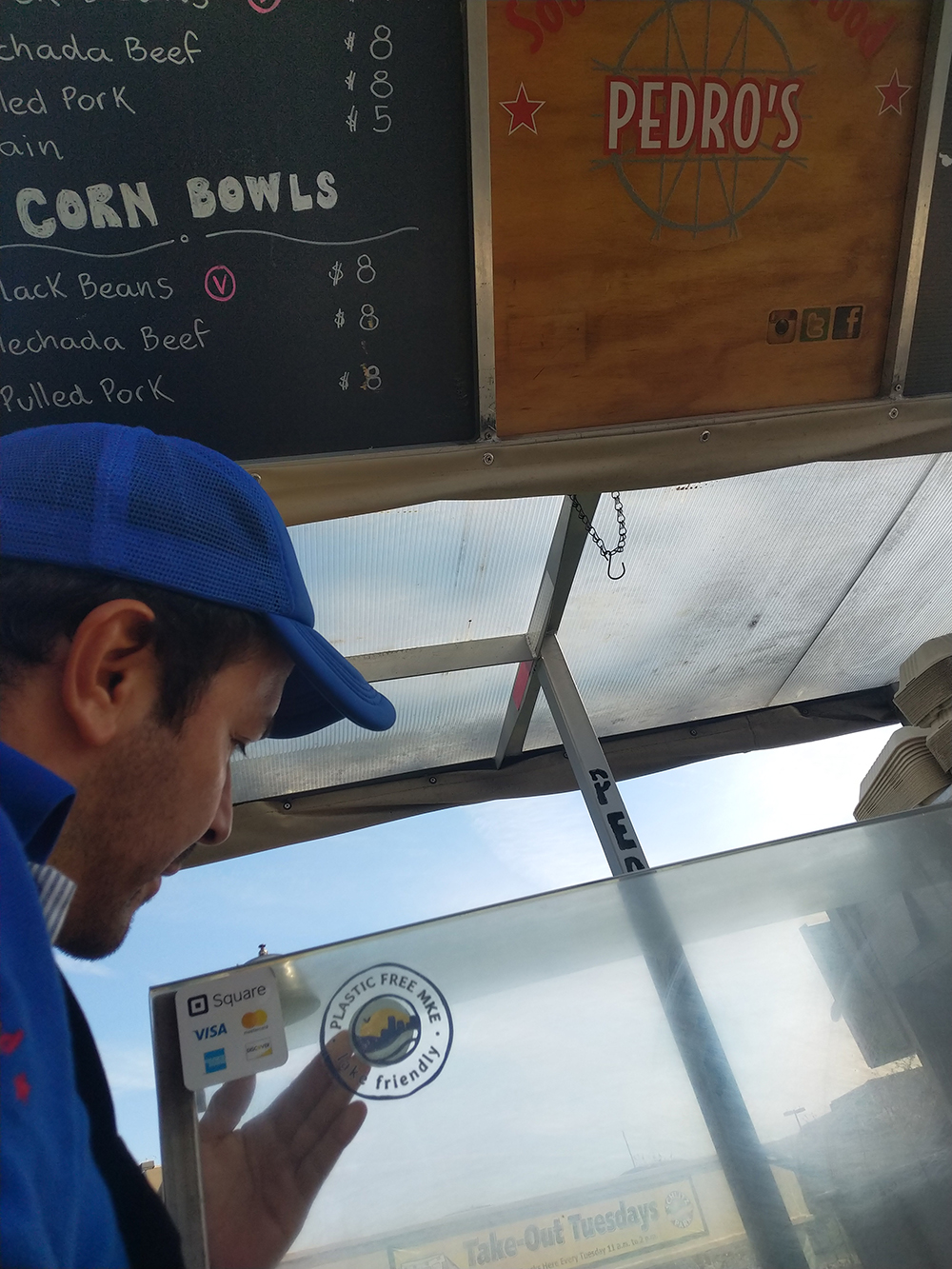 Lakefront Brewery in Milwaukee found that despite the price increase, its customers appreciated the switch to non-polystyrene containers. A number of Milwaukee residents are adamant about eliminating polystyrene.

Styrofoam is one of the worst containers because it is made to break apart, said Skylar Chrobak, a Milwaukee resident and Plastic-Free MKE member. “Also, the fact that many restaurants use it for takeout poses a direct health concern for humans’ digestive systems, as heat from the food on the Styrofoam seeps chemicals into foods that is later intended to be eaten.”

There are a number of polystyrene foam replacements, said Ostermeier. Ikea and Dell have already switched to packaging made out of mushrooms, according to a January 2019 report by National Public Radio. Starched-based packaging is anti-static and water soluble, said Susan E. Selke, director and professor at Michigan State University’s School of Packaging.

“Alternative packaging material is on the rise,” Ostermeier said. “Like using plant fibers. Every week I feel like I hear about a new type of packaging being produced that’s biodegradable.

“As someone who regularly participates in river cleanups, (polystyrene) is by far the most prevalent and most frustrating litter to clean up, as it breaks down into little pieces,” said Jessica Gebhardt, a member of Plastic-Free MKE. “I would be thrilled to see it removed from use.”

When asked why there’s such a big difference between Milwaukee companies eliminating polystyrene and Dunkin Donuts receiving backlash for moving to the new double-walled paper cups, Ostermeier could only hazard a guess: “I think different communities have different goals. For us, it’s about getting rid of the foam.”