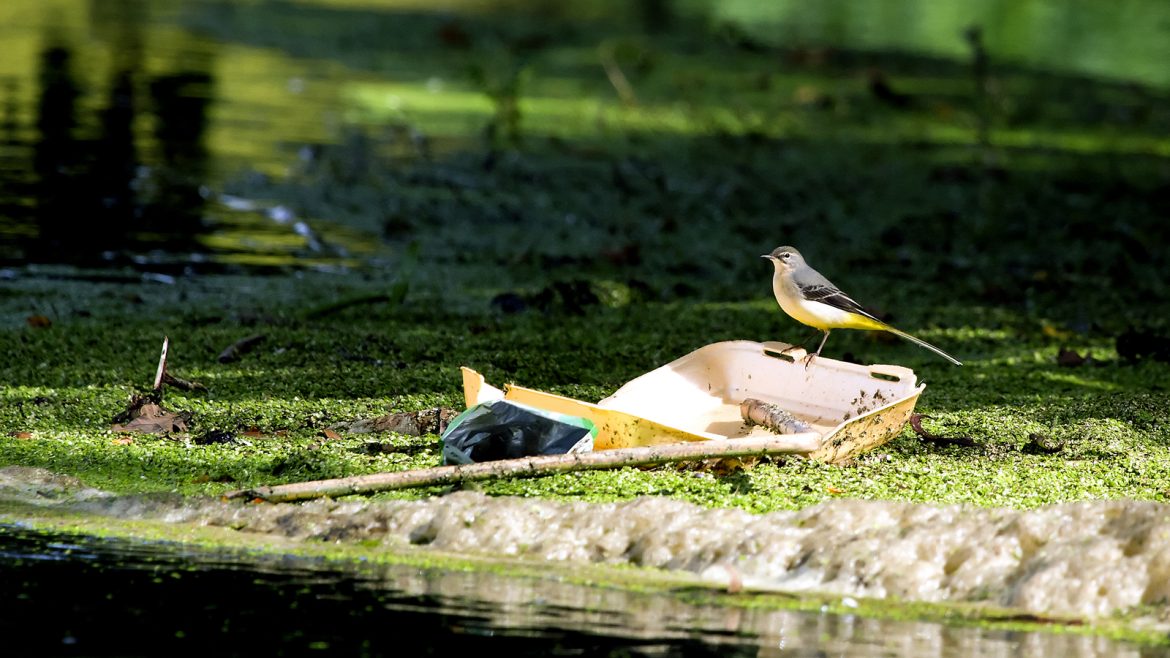 A bird perches on a polystyrene clamshell container, which will never biodegrade. Image: Chris Moody

Editor’s note: This is the first of two stories exploring the effects of polystyrene on the environment, organizations fighting to ban it and companies adapting environment-friendly alternatives.

A foam takeout container travels from a restaurant, to a household and then into the dump.

Its journey may not stop there if it is picked up by the wind and flies into Lake Michigan. There it breaks into little pieces that can be eaten by a fish that confuses it for food. The foam stays in the fish’s stomach until it dies. Hundreds of pieces of foam can be found in its body.

Polystyrene foam, more widely known as Styrofoam, does not biodegrade. It breaks into small pieces and persists in the environment from the moment it is created.

Environment America has launched a Wildlife Over Waste campaign to spare birds, fish and other wildlife from the harm caused by plastic pollution.

“This is something that is having a moment in the consciousness of not just America but around the globe,” said Nathan Murphy, state director of Environment Michigan, one of the national group’s 29 regional organizations. “We are really taking a step back and asking if the convenience of this takeout container is worth the harm that it can cause once it gets out into the environment.”

Scientists continue to document the scope of plastic pollution and are investigating its effects on the environment and public health. According to an ordinance in Albany, California, styrene, a component of polystyrene, is a known hazardous substance that medical evidence and the Food and Drug Administration suggests leaches from polystyrene containers into food and drink. Also, due to the physical properties of polystyrene, the Environmental Protection Agency states “that such materials can also have serious impacts on human health, wildlife, the aquatic environment and the economy.”

Plastic foam bans have passed in more than 200 United States cities and other communities, including Portland, Oregon and Portland, Maine. The Environment America national network has won similar efforts to reduce waste and plastic pollution, including statewide recycling laws and the first statewide plastic bag ban in California.

None of those laws encompass states bordering the Great Lakes which contain 21% of the world’s surface fresh water.

“Polystyrene containers inevitably enter our Great Lakes waters,” Murphy said. “There is something special about Michigan and the Great Lakes, and we need to protect our resources.”

The Illinois Environmental Council and its 80 affiliate organizations is also committed to a single-use polystyrene ban.

“It is estimated that 22 million pounds of plastic enter the Great Lakes every year, said Jen Walling, executive director of the Illinois Environmental Council. The amount of plastic dumped into Lake Michigan alone could fill 100 Olympic-sized swimming pools.

With the planet’s largest system of surface freshwater, Great Lakes officials worry about the amount of plastics and polystyrene that flow into them.

Plastic debris makes up about 80% of the litter on Great Lakes shorelines, according to a Rochester Institute of Technology study. It found that larger plastic debris can entangle wildlife and mar boating and other recreational activities. Smaller plastic debris can be eaten by fish, birds, plankton and other animals. That plastic can be transferred up the food web to affect a larger section of aquatic or human life.

“Nothing that we use for a few minutes or a day should be out there harming wildlife for literally centuries,” Murphy said.

While the drive for removing single-use polystyrene cannot be tracked to one source, officials say the origin is not important because of the positive outcomes that will result from removing the plastic from the environment.

“We clearly see consumers demanding action in certain places,” said Sean Hammond, the Michigan Environmental Council policy director. “Large companies do not change what they are doing without consumer pressure.”

Dart Container Corp., a large manufacturer of polystyrene products, is working to offset the environmental effects plastic products cause by opening foam recycling drop-off centers and establishing other recycling programs. In 2019, Dart’s affiliate, Plastic Recycling, Inc., opened the first-of-its-kind facility dedicated to recycling mixed bales of foam and rigid polystyrene from residential curbside recycling programs in the US and Canada. It is located in Indianapolis, Indiana.

“The solutions out there for polystyrene right now are just a quick fix,” said Becky Warren, Dart spokeswoman. “It’s much more comprehensive than many people think and needs multiple partners to come to the table to help find the correct solution that’s not just a quick fix.”

Legislation is in the works in Michigan to ban any single-use polystyrene convenience plastics, Murphy said. Environment Michigan has been working on a bill draft of a ban with state Rep. Yousef Rabhi. Illinois PIRG, an environment advocacy organization, is calling for an Illinois ban on polystyrene take-out containers and single-use plastic bags.

Tomorrow: Businesses across the United States take a stance on the polystyrene issue and decide whether or not to make the more ecofriendly choice.