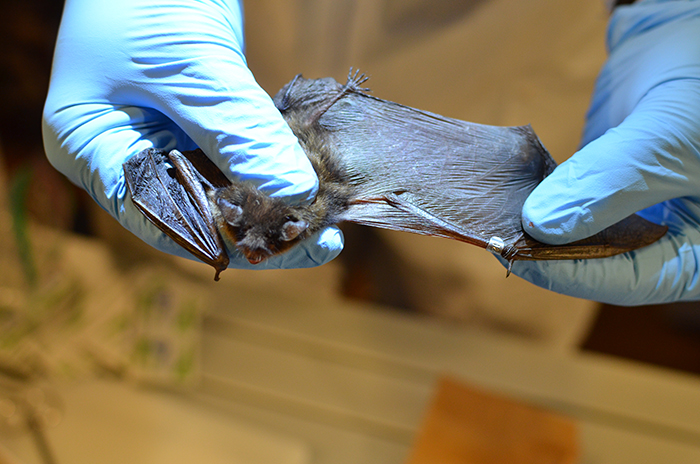 Evidence of white-nose syndrome on the wing of a little brown bat. Image: Michigan Department of Natural Resources

Before white-nose syndrome swept through Mead Mine, it was home to 18,000 bats. Five years later, it houses just 200.

“We’ve seen populations decline by nearly 100% in some locations,” said Bill Scullon, a wildlife field operations manager for the Department of Natural Resources in the western half of Michigan’s Upper Peninsula.

But there’s a new weapon to combat the deadly disease – air conditioning.

White-nose syndrome has killed millions of bats across North America, Scullon said. It first arrived in New York in 2006 and has since spread to 28 states and six provinces.

The fungal disease grows on their wings and faces while the bats hibernate, he said. And it makes them wake up prematurely so that they deplete their fat storage. That causes them to starve.

But wildlife biologist John DePue may have a strategy for fighting back. This winter he will construct a ventilation system in the abandoned Mead Mine in the Upper Peninsula to lower its temperature. This should slow the growth of the fungus on the bats, he said.

“We want to see if we can increase the survival rate,” said DePue, who works with Scullon at the Department of Natural Resources.

An 8-inch fan at the front of the mine—where bats don’t hibernate—will suck in cold air from the outside and then release it in the back of the mine through duct work.

This will push the warm air out and make the bat’s environment colder, DePue said. 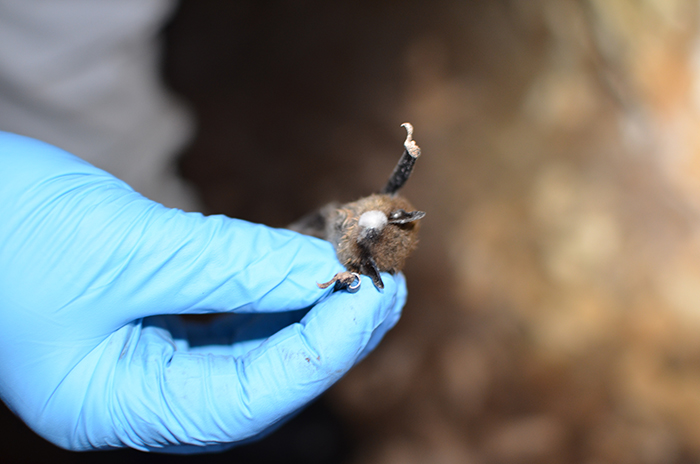 A dead little brown bat, from a mine shaft in Ontonagon County, with the characteristic white nose produced by white-nose syndrome. Image: Michigan Department of Natural Resources

Colder mines seem to have less bat mortality, Scullon said. By making the mine colder, bats will go into a deeper state of hibernation and the fungus won’t grow on them as well.

DePue will take swabs of bats’ wings and the walls of the mine to track the fungus’s growth for the next few years. If the temperature manipulation proves to help, he wants to implement the technology in other mines.

While this isn’t a cure for white-nose syndrome, it could slow the mortality rate of bats, DePue said. And since the ventilation system is relatively inexpensive, it could become a long-term approach.

It’s much cheaper than other treatments or developing a vaccine, DePue said.

“Trying this type of habitat modification… is a clever and promising approach to find solutions to protect bats suffering from WNS,” she said.

The U.S. Fish and Wildlife Service hopes that the project will improve understanding of how altering the climate of a bat dwelling affects the fungus, said Richard Geboy, that agency’s regional white-nose syndrome coordinator.

“It’s going to add to that growing body of knowledge that’s needed to manage the disease,” Geboy said.

And if it doesn’t, white-nose syndrome could drive some bats to extinction, Scullon said.

“The bats show no immunity to it.” 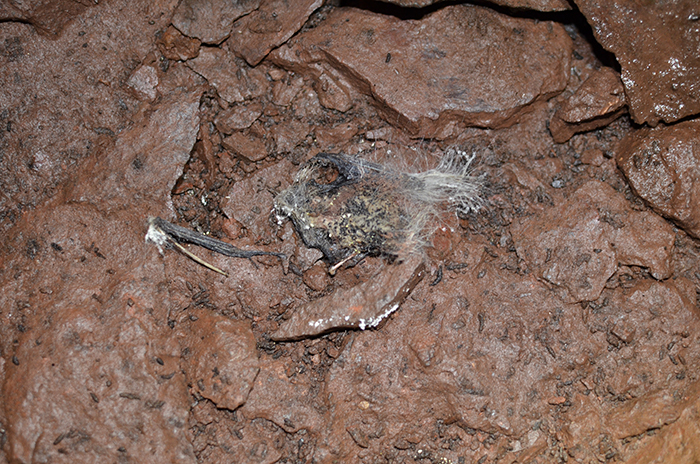 The remains of a bat with white-nose syndrome found in a mine shaft after winter in Ontonagon County. Image: Michigan Department of Natural Resources

But not every species. Those species that migrate carry the disease, but appear to be unaffected, Geboy said.

But for those that are, even if a solution is discovered, their recovery will be slow.

Bats have a very slow reproductive rate, so it takes a long time for the population to build.

“If there was a cure found tomorrow, to build up the bat population to what it was 10 years ago would probably take multiple centuries or even a millennium,” Scullon said.

Even though all bat habitats in Michigan have already been exposed to white-nose syndrome, there are ways people can help them survive, DePue said. 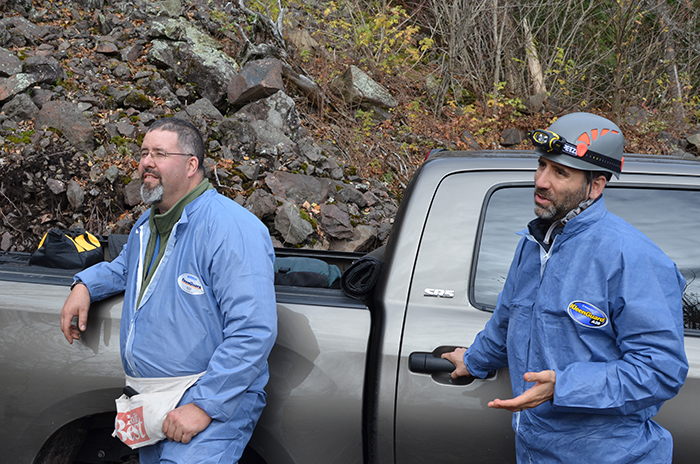 Avoid contact with bats when trying to remove them from your home. It’s better to wait for them to fly out and then patch their entry point while they are gone, he said. And try to avoid extracting bats in the summer months if they are nursing their pups.

Meanwhile, appreciate them while you can.

“If you want to appreciate bats, then see them in the summertime, enjoy them, view them, because in many cases they will not be there for your grandchildren to see or enjoy,” Scullon said.

“And what that means for the environment, we really don’t know,” he said. “But it probably won’t be helpful.”