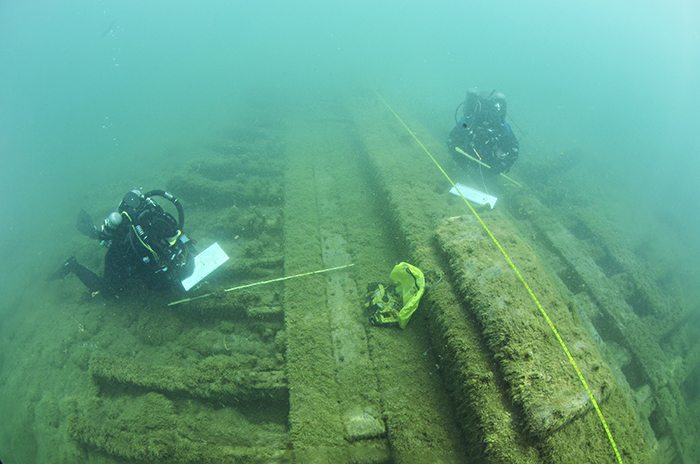 Imagine going diving and finding an 1890 shipwreck at the bottom of Lake Michigan.

The Montgomery schooner was discovered in 1958 by divers from Camp Haven, a Wisconsin military camp that was operated as an anti-aircraft testing range from 1949 to 1958, according to Caitlin Zant, a maritime archaeologist with the Wisconsin Historical Society. The ship sits almost half of a mile off the shore of the Whistling Straits Golf Course in Mosel, Wisconsin. Mosel is located about 60 miles north of the city of Milwaukee.

The vessel was recently placed on the National Register of Historic Places, the “official list of the nation’s historic places worthy of preservation,” according to the National Park Service.

The wreck has been known to native divers, but it was brought to the attention of the Wisconsin Historical Society in 2015 by local diver Steve Radovan, who had remembered that it was a popular diving site in the 1970s.

Zant and her team started searching for it about 1,000 feet off the coast of the golf course, as Radovan had described. The National Centers for Coastal Ocean Science joined the search in the summer of 2017 expanding the search area with the use of side-scan sonar. The federal agency  looked close to the coast of Sheboygan at fisheries and fish habitats. From its original location, the ship has shifted locations. They found it in 2018 with the help of information provided by both Radovan and the ocean science survey.

They enlisted the help of a few volunteers who, “came out with us to look at the site, taking photographic data, gathering diagnostic data so that we could confirm whether or not this was the Montgomery,” Zant said. “In our analysis, there were two areas that looked kind of odd (which) led us to the understanding that this was a double centerboard.”

That was important for identifying the vessel. The Montgomery is one of a handful in Wisconsin shipwrecks to contain two centerboards and the only example of a double centerboard canal schooner, according to the application for historic designation.

Despite damage to the vessel, the Montgomery shipwreck can help archaeologists and historians learn “about double centerboard schooner construction and the lumber, grain, and coal industries,” according to the registration form.

“The centerboard is used in Great Lakes shipbuilding to let the vessel have better handling in the wind,” Zant said (Sailors) would drop the centerboard (meaning) the board would drop from the center of the ship to give the ship more space to go through canals.”

Launched in 1853 from Clayton, New York, the ship was built for merchants, John N. Fowler and Henry Esselstyn. Originally named The Northern Light, the ship operated in the grain, lumber and coal industries, Zant said.

The ship was relaunched as the Montgomery and operated throughout the region until November 1890 when during a gale it struck rocks about 6 miles off Sheboygan and sank in eleven feet of water. No lives were lost, but when the tug Sheboygan tried to pull the vessel free, it was found that she could not easily be recovered, according to the Milwaukee Sentinel.