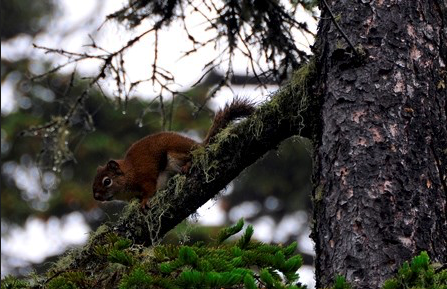 Isolated as it is, Isle Royale may be biologically less isolated and more connected than scientists had believed.

That’s the take-away from a new study of red squirrels thriving on the 207-square-mile island in western Lake Superior.

The Isle Royale archipelago, most of which is a federally designated wilderness, has been isolated for the past 10 millennia, resulting in unique types of animals and plants. Moose and wolves are its most-studied mammals, while the island’s other 17 mammals – including the red squirrel – have received far less research attention.

The red squirrel, which is abundant on the island, had been considered a localized subspecies – in other words, one of those unique critters.

Not so: The latest DNA testing tells a different story.

A study by scientists from the University of Wisconsin at Madison and Isle Royale National Park “revealed that Isle Royale squirrels are not genetically distinct from other mainland populations across North America” and shouldn’t be classified as a local island subspecies.

“Recent evidence suggests that Isle Royale is more connected than previously thought,” the authors wrote. Isle Royale is 56 miles from the Michigan mainland and 18 miles from Minnesota, according to National Geographic.

As co-author and wildlife biologist Mark Romanski put it, “We lost a special creature but gained an understanding.

“A lot of people think Isle Royale is a real natural system and that the animals have been there a long time. I just want to tell the truth about these critters,” said Romanski, the national park’s natural resources chief.

So how did those mainland-island connections happen?

Nobody knows for sure, but there are theories:

For example, the study noted that squirrels “have been documented to traverse ice and snow and have strong swimming ability across open water. Thus, we suspect that recent, and possibly continued, connectivity between mainland populations and red squirrels on Isle Royale is plausible, probably via barrier islands and ice bridges across Lake Superior.”

The study noted that colonization and dispersal from the mainland have influenced other mammal species on the island. For example, wolves have immigrated to and emigrated from the island at least three times since 1948, and American martens recolonized Isle Royale from Canada relatively recently – almost a century after disappearing from the island

Another possibility is that indigenous peoples or early explorers deliberately released mainland red squirrels on the island, according to the study. They had long used the island for hunting, trapping, copper mining and fishing.

The authors said the DNA results are important because they show “how dynamic and connected – via natural dispersal events or human assistance – this island is with the mainland.

“Ultimately, characterizing the dynamics and genetic diversity of insular or geographically isolated populations such as Isle Royale red squirrels is essential to understanding biodiversity,” the study said.

Romanski said, “We look at one critter, and then we take another look and new curiosity keeps breeding new curiosity.”

The squirrel study grew out of research about the return of the American marten. And he said the scientists’ next project involves the island’s red foxes, including collection and analysis of scat – droppings – and DNA to “look where these foxes are coming from.”

The study appeared in the Biological Journal of the Linnean Society.