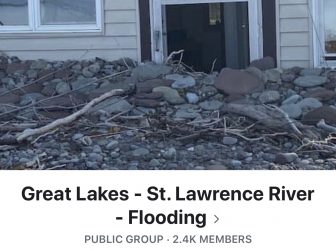 High water on Lake Ontario has caused a flood on social media.

That prompted lakefront property owners and others to question something known as Plan 2014, a plan created by the International Joint Committee that is meant to regulate water outflows from the Moses-Saunder power dam in Cornwall, Ontario. The idea is to save ecosystems, make shipping easier, generate hydro-power and prevent floods.

Plan 2014 was meant for the lake’s water level five years ago, but since then water levels have increased, leaving properties flooded and ecosystems damaged. That inspired the creation of many Facebook groups, Twitter and Instagram posts regarding the flooding of houses, the questioning of Plan 2014’s adequacy and ecosystems now underwater.

“This page is for information and solutions,” she said. “I absolutely think the groups are helpful when you’re sharing knowledge, when you’re coming together and trying to figure things out.” 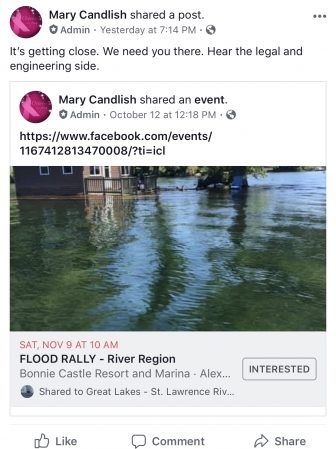 Her group contains information on upcoming Plan 2014 rallies, pictures of flood damage, news updates, advice and also debates on the causes of the flood. Some people in the Facebook group believe that the flooding is caused by Plan 2014 and others believe that it’s due to climate change and other outside factors, Candlish said.

“There’s people on one side and there are people on the other,” Candlish said. “We are trying to understand everything and trying to come up with a solution. People want to know what to do and how to get help.”

Jim Shea, the founder of the Lake Ontario/St. Lawrence River Alliance, says that social media is crucial to his organization’s efforts to repeal Plan 2014.

Posting to social media and creating communities online is important to society and is influential to disaster relief, like floods, said Cliff Lampe, a social media expert and professor at the University of Michigan School of Information.

“If people are searching for ways to dry out a basement or need a contractor after a flood, then even though one person posts asking for recommendations, the other 150 people can see the recommendations made,” Lampe said. “Not only is one person benefitting, but the other people in the group are too.”

Being in a community or group online for natural disaster relief can have positive psychological effects and make people feel more stable during a tough situation, he said.

“Social support is half to two-thirds of the posts you might see; probably higher during natural disasters,” he said.

Sarah Delicate, president of United Shoreline Ontario, said social media platforms may not be the best way to spread urgent information but she does believe that it is a useful resource before and after floods occur.

“If, for example, a conservation authority raises a flood warning, to me that’s a very inefficient way of getting an alert out that imminent flooding is happening,” she said. “But between floods as we are trying to share information about Plan 2014, share information about flood resilience approaches and that kind of stuff, I do believe social media has a very important role to play.”

Jack Cardillo, who has lived in Rochester, New York on Lake Ontario for 41 years, said that he is a part of many Facebook groups that help him learn about the floods and Plan 2014.

“I’m in the shipping group, the flooding group, and PAINE beach association group,” he said. “And we’ve certainly been directly affected by the flooding. Our street is on the water and obviously some of it is lower than the other sections. My section is very high and so I haven’t gotten too much damage, I’ve been blessed.”

Cardillo said he gathers information about underlying flood causes by talking to different groups on social media. Just like the other people involved in the Great Lakes- St. Lawrence River- Flooding, Cardillo has his own opinions about Plan 2014.

“It looks good on paper but not out my window.”