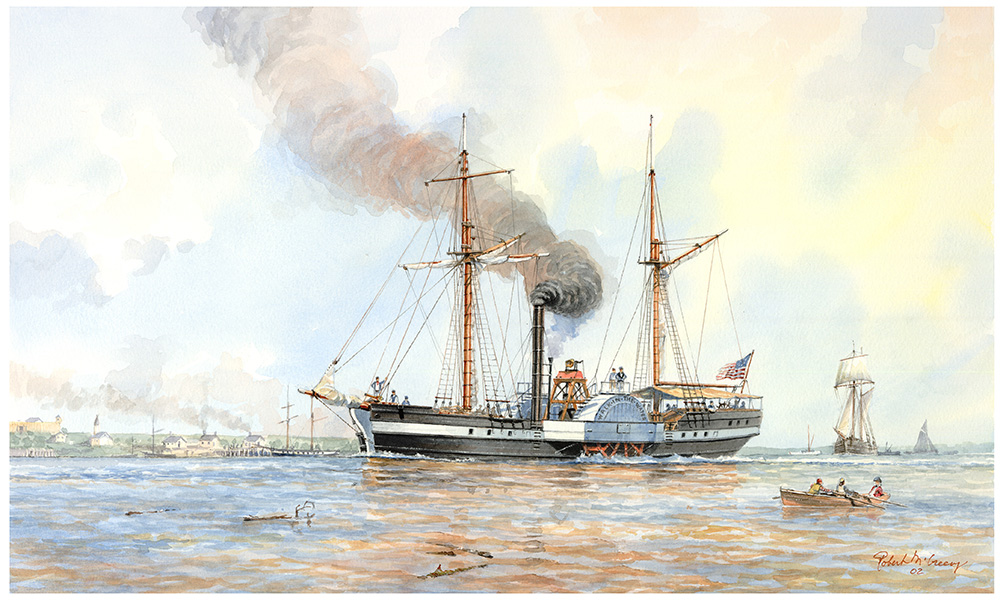 “The Walk in the Water,” by Robert McGreevy

Years before the Titanic, there was a Great Lakes ship that walked on water.

It was not as huge as the Titanic nor as famous. But this steamboat made some history, that interested Great Lakes historian and marine artist Robert McGreevy.

“I have always been interested in early ships, and there were no credible images of it,” McGreevy said recently after he gave a lecture on the vessel at the Fort Gratiot Lighthouse in Port Huron, Michigan. “There were some lithographs in Ohio, and I tried to recreate it.”

McGreevy’s first painting of the vessel was a watercolor that he did in 2002. It was based on an early model of the vessel that is displayed at the Maritime Museum of Sandusky, Ohio. 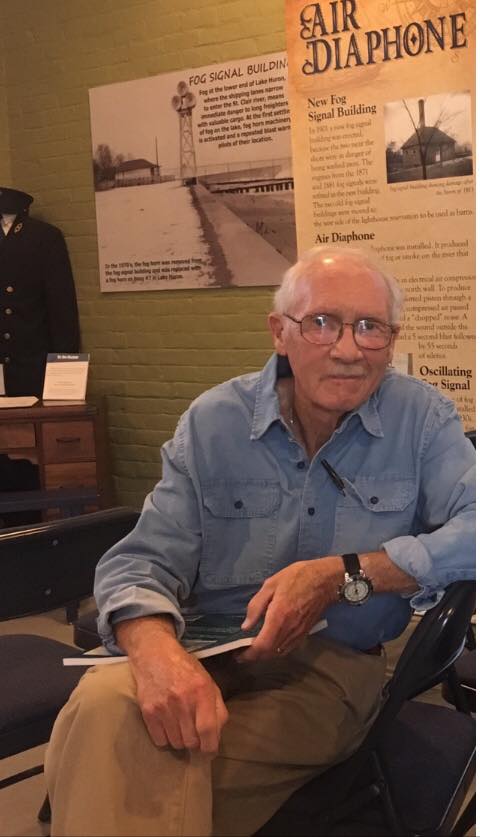 “The original was sold many years ago and is part of a private collection,” said McGreevy, who was named Historian of the Year in 2008 by Michigan’s Alcona Historical Society.

McGreevy studied art at Detroit’s Cass Technical High School. He is self-employed and works out of a studio attached to his house in Harbor Beach, Mich. He frequently lectures about vessels on the Great Lakes and also showcases paintings he has done of some of them.

His recent lecture was on the first Great Lakes steamboat.

Affectionately called the Walk in the Water, this steam-powered vessel was the first to sail on lakes Erie, Huron and Michigan, McGreevy said. It embarked on its first journey over Lake Erie on August 25, 1818.  Its name originated from a Native American’s description of a steam-powered boat: It looked like it was walking in the water.

“It was the first time a (Great Lakes) ship had traveled by schedule, and it showed that it was possible to sail a steam ship through the Great Lakes,” McGreevy said

The passengers on the vessel were divided by gender and the men had a little bar at the front of their cabin, he said. “That really helped,” McGreevy said with a laugh.

“He rammed into the dock and blamed it on the engine crew,” McGreevy said. “He began to cuss through the megaphone, and at that point, the company that owned the boat began to look for a replacement.”

In 1820 Jebediah Rogers, became the vessel’s commander. Little did he know that the first ever steamship on the Great Lakes would be wrecked on his watch, McGreevy said. But, “all good things must come to an end.”

On October 31, 1821, when the Walk in the Water left Buffalo, New York it began to break apart.

“Because of the design of the hull, it could not take the waves. It was an inherent design flaw,” McGreevy said.

According to McGreevy, the vessel had left the town of Black Rock just outside of Buffalo, New York bound for Detroit, Michigan.

“There’s nothing left of her in the lake,” he said. “The exact location where she was beached is known approximately, but that part of the shore line has changed over the years.”

“Who knows, there might be parts buried along the shoreline.”

The vessels engine was salvaged and installed in a successor, Steamer Superior.  Some of her wood was used in the Lancaster Presbyterian Church in New York, which is still in service.

James Clark, a church elder, was on the ship when it was wrecked, said church member Gloria Chaves. It has been said through the years that he obtained some of the wood from the ship and used it in the church’s steeple.

“The bell in the steeple, which was made using the wood from the ship, is still ringing today, every Sunday, calling people to come to worship,” Chaves said.

Copies of McGreevy’s original painting of the vessel can be obtained at www.mcgreevy.com.