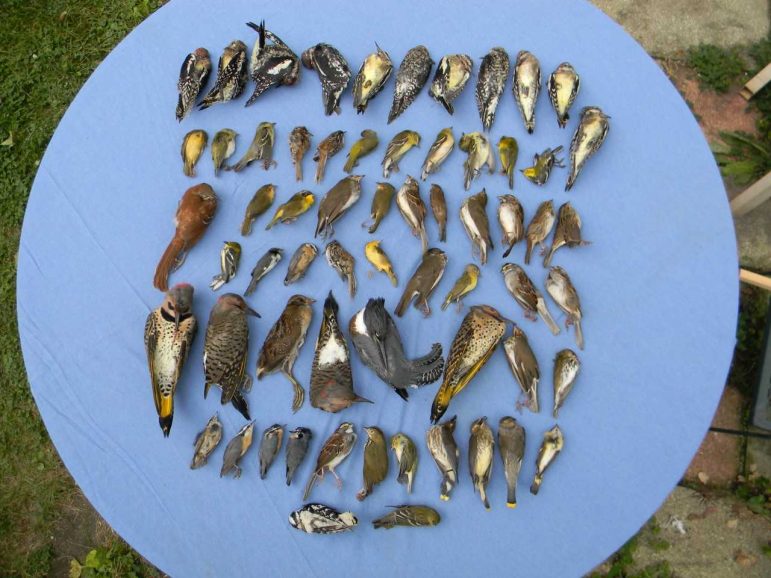 These birds that collided with buildings in downtown Chicago were collected over several days last fall. Image: Annette Prince

Chicago ranks as the deadliest city in the United States for birds, according to a recent study by the Cornell Lab of Ornithology.

People might think that a larger city like New York would be guilty of more bird-window collisions than Chicago, but an unfortunate combination of building structures and geographical placement proves to be deadlier than size.

“It’s not just the size of the city, it also has to do with how bright the city is and also where the birds are flying themselves.” said Kyle Horton, the lead researcher on the study which evaluated 125 cities for their bird-killing potential.

Every fall, billions of birds will fly from the northern United States and Canada to the tropics and in the spring those birds return from their tropical vacation, according to the Cornell Chronicle.

Chicago is positioned on one of the primary flight paths, Horton said. It is the nation’s deadliest city for birds during both the spring and fall migrations. Other Great Lakes regional cities in the study’s top 20: Minneapolis (sixth spring, seventh fall), Detroit (13th spring, 15th fall), Indianapolis (16th spring, 13th fall).

Annette Prince witnesses this flight and its casualties firsthand. She is the director of the Chicago Bird Collision Monitors, a volunteer-based conservation project that has been protecting and recovering birds that are killed and injured in downtown Chicago during these mass migrations since 2003.

“They’re birds that certainly cannot afford to be having collisions as an additional reason to have their species reduced,” Prince said.

The decline of these species doesn’t only affect local populations and ecosystems. Migratory bird populations are an important part of a global environment, she said.

“Chicago is in the fortunate position to enjoy a huge migration of birds every spring and fall,” Prince said. “They’re following a pathway that they’ve used for thousands of years, before there was ever a city here.”

What was once a lakefront that travel-weary migrating birds could easily navigate and find pitstops offering food and rest is now a maze of lights, reflections and invisible yet deadly obstacles. This results in 5,000 dead birds per square-mile in Chicago, Prince said.

And that’s a low estimate. The volunteers at Chicago Bird Collision Monitors can’t find every crime scene when there are so many, and there are plenty that could be tampered with by passing pedestrians, cars, or a wandering cat or dog, Prince said.

Windows are often the perpetrator of these deaths, but lights act as a productive accomplice.

“It’s not necessarily that the lights are killing birds,” Horton said. “It’s that the lights seem to attract birds, it disorients them and elevates their risk of colliding with structures.”

To reduce the risk of bird-window collisions, Horton encourages those who live in or work in buildings to turn off or dim unneeded lights. This is especially relevant at 7 p.m. to 8 p.m. for three to four weeks of spring and fall, which is when the majority of birds would be moving through the city, said Horton.

Reducing lights can decrease bird-window collisions, but building-designers and homeowners can also make changes to the windows themselves without living in a building devoid of natural light.

“The glass has to have some sort of visual noise, something that alerts the birds to the presence of a surface instead of an opening,” Prince said.

This visual noise could be decorations such as hanging banners, cords, ribbons, or sunshades in front of the window. It could also be modifications to the window itself like window films, decals, etchings, or use of glass that isn’t as reflective or transparent. Further information on measures and products that can be used to make windows less susceptible to bird-window collisions can be found on the websites of the Chicago Bird Collision Monitors and the American Bird Conservancy.

“We have the tools to make things safer for birds,” said Prince. “It’s just a question of people saying that it matters enough that we will do it.”

Migratory birds have been declining for decades and the lack of awareness of the importance of these options is a major setback in their use, said Pamela Rasmussen, an assistant professor in Michigan State University’s College of Natural Science.

“Everyone just wants nice shiny skyscrapers,” she said. “They have no idea what they’re doing to the bird population.”

Researchers are developing a glass with nanotechnology that birds can see but people can’t, she said.

It would limit the amount of transparent or reflective glass on the exterior of buildings and specify glass that provides visual noise in situations that are proven hazardous for birds. It would also limit the amount, location and timing of exterior lighting and reduce the interior lighting visible from outside for all newly constructed buildings and any buildings that undertake a major renovation. More information can be found at the bird-friendly Chicago website.

Representatives of the Illinois Environmental Council, American Bird Conservancy and the Lincoln Park Zoo recently testified in support of the measure, according to the Office of the City Clerk.

But high-rise buildings within large urban centers aren’t the only bird hazards out there.

“A skyscraper certainly will on average kill more birds than a single residential home,” Horton said. “But…if you sum up all of the mortality that happens at low-rise buildings it’s substantially more than what would happen at a city level.”

So consider turning that porch light out or making your security lights motion-activated. It might save more than just electricity costs.