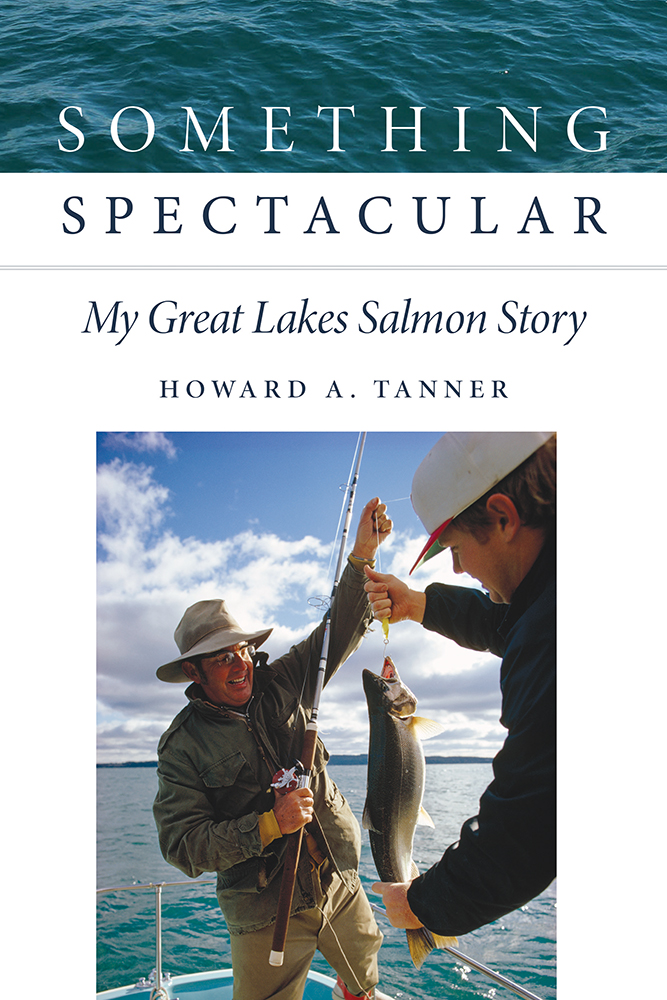 Something Spectacular, My Great Lakes Salmon Story, published by the Michigan State University Press, is available in print for $39.95 and as an eBook for $31.95.

It’s hard to imagine the Great Lakes not having any large sport fish – yet it was once that way.

Before the introduction of Pacific salmon into the system, the Great Lakes had a small sports fishery with few anglers. While small game fish like largemouth bass, walleye and yellow perch were common, few large game fish were present.

Howard Tanner made a revolutionary decision more than 50 years ago that changed that. At the time he was the head of the Michigan Department of Conservation’s Fish Division. A trip to Colorado exposed Tanner to salmon introduction programs. Officials there had successfully introduced salmon into freshwater.

Tanner realized then that there could be a similar opportunity in Michigan.

More than 50 years after the revolutionary decision, Tanner has written “Something Spectacular: My Great Lakes Salmon Story” to explain that decision and its impact.

At the time of Tanner’s Colorado visit, the Great Lakes faced a new threat. The construction of the Welland Canal in southern Ontario was a commercial success, opening up the lakes to ocean-going cargo ships. But it also provided a route for non native fish to avoid Niagara Falls and deeply invade the region.

This led to a large-scale invasion of alewives into the Great Lakes, especially Lake Michigan. The small fish is native to the North Atlantic and Lake Ontario. The natural barrier in the Niagara River prevented the fish from getting any further into the Great Lakes system, but once the canal opened, the small fish burst into Lake Huron and Lake Michigan. With few large predators, and a relatively short life cycle, the population exploded. Mass die-offs became the norm and huge piles of the dead fish washed ashore.

With mass die-offs occurring every summer, Tanner sought an effective way to eradicate the fish. The smell of alewives rotting on recreational beaches offended many, and it was killing tourism in the Great Lakes system.

But the idea didn’t come without a challenge. Competing interests from other agencies to restore fisheries lead to stand-offs over the introduction of salmon.

“The biggest challenge was the federal government, the bureau of fisheries,” he said. “They wanted to rebuild the [native lake] trout, not introduce another species.”

After winning over then Gov. George Romney to the plan, a surplus of salmon eggs in Oregon resulted in some fish being brought to hatcheries in 1964. It failed. The fish did not survive. A second attempt in 1965 brought more success, and they were ready for an April 1966 release.

On April 2, 1966, Tanner’s team introduced coho salmon into the Platte River. The fish survived, and by the next year large salmon were caught all over Lake Michigan.

Tanner had considered writing a book in the 1960s but his career got in the way. One of the many people urging him to try again was former Michigan Gov. Jennifer Granholm.

He took the advice, but it wasn’t easy.

“I had never written a book before,” said Tanner, who lives in Haslett, Michigan. “We were enjoying retirement, we were living comfortably, but it was a moment in history that had to be recorded.”

The first draft was more like a personal memoir, he said. So he enlisted  Carol Swinehart, a former communications manager at Michigan State University, to help him get it right.

Tanner sees a strong future for Great Lakes salmon, even though there have been challenges over time.

“But the system has found a way to adjust to a level that can move to the foreseeable future.”