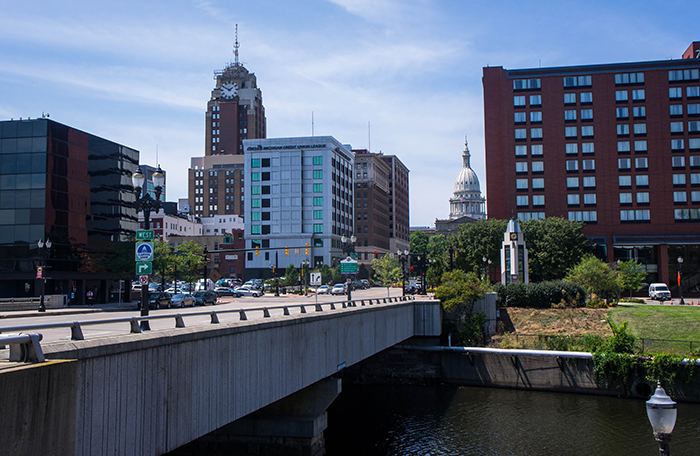 Lansing, Michigan Mayor Andy Schor proposed a plan March 25 to use 100 percent renewable energy for all city government buildings. This would make Lansing the first city in Michigan to do so. Part of his budget proposal included a plan to buy renewable energy credits from the Lansing Board of Water and Light.

“We decided that the city of Lansing should be a leader and should purchase renewable power,” said Schor. “We looked at our budget, and we made this a priority.”

Councilmember Peter Spadafore commended Schor. “I think it is very important we lead by example on renewables,” said Spadafore. “I really very much appreciate this.”

The plan, as proposed, would take effect July 1 and would power all 187 city buildings. Director of Parks and Recreation Brett Kaschinske said that department was proud of the suggested plan.

“Here in the city we have 111 parks, we have 16 miles of trail and we’re blessed with two rivers,” said Kaschinske. “Being able to use the renewable resources that we have is really what people are looking for from their city, from their government, as being responsible to the environment we live in.”

Thirty-year resident and council meeting regular Don Horton said, “I don’t know that much about the project yet, but the idea of sustaining electricity, hopefully to cut costs for energy in the city, I think is a good idea.”

Horton raised concerns about the costs. “I’d like to see the residential impact,” said Horton. “Does this mean increased rates for residents in the city down the road?”

“It comes out of our budget,” said Schor. “These are dollars that are coming in from city tax dollars, from fines and fees, property tax, income tax, revenue sharing from the state.”

Schor explained that, in addition to the renewable energy plan, the proposed budget would hire a new police office and fix roads and sidewalks, among other things.

“Knowing that it’s a renewable energy source is important. It reduces out carbon footprint, said Schor. “We’ll lead on this one.”

The switch to renewable energy works through the board’s Greenwise plan that Lansing BWL already has in place and allows residents to choose to use renewable energy at a slightly higher price. The expected cost to upgrade to cleaner energy is expected to be around $280,000 per year, with the rate falling about $10,000 every year.

Since climate change is a global problem and cannot be solved by a single continent, much less a single city, motivating factors were cleaner air and setting a precedent for other cities.

“I think it is very important to lead by example on renewables,” said Spadafore. “The Greenwise plan has been around. We talked to our residents about signing up and doing all that, but with 187 sites that are city owned getting their power from renewables, it’s gonna help impact the commitment this council has made through resolutions affirming our climate action plan.”

Lansing BWL plans to use mostly wind power, though it is exploring solar and hydro options as well. The details aren’t finalized, but BWL is working out ways to maximize the renewable energy it can offer.

Customer service representative Jack Lovin said the plan would be sure to happen by the mayor’s July 1 promise.

“We are in the process of opening a solar park,” said Lovin, who is a former power plant operator. However, not much more needs to be built, he said. “We already have wind mills and and solar panels.”

The plan depends upon approval of the budget by city council, which is mandated to occur before May 20. The budget can be viewed on the city’s website.