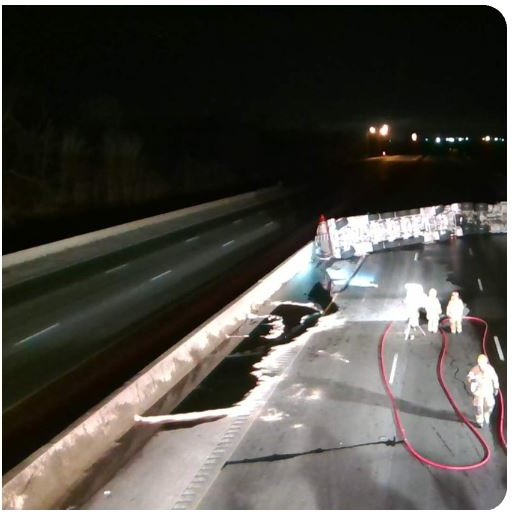 Environmentalists are worried that a recent fuel spill in south-central Ontario will reverse their efforts to restore the local environment and that it threatens Lake Erie.

“We’ve been working 15-plus years to rehabilitate that creek and this could certainly be a setback in that rehabilitation,” said Don McKay, president of local environmental group Friends of Mill Creek.

A fuel truck on highway 401 in Puslinch, Ontario, flipped January 13th when trying to avoid a collision. It spilled more than 13,000 gallons of fuel.  The fuel flowed into Aberfoyle Creek and has continued flowing downstream towards Lake Erie which is about 80 miles away.

The Ontario Ministry of the Environment deployed fuel absorbing booms along the river to prevent further contamination. They’re optimistic.

“At this point, we believe these measures will prevent the spilled fuel from travelling any further downstream, however the environmental consultant continues to monitor containment measures and will take additional further action if necessary,” Gary Wheeler, a spokesperson for the Ontario Ministry of the Environment, wrote in an email.

So far there are no signs that the spill harmed any wildlife, according to ministry records. But one analysis indicates that the threatened bobolink and eastern meadowlark could potentially be in that area, although its been years since either were spotted there, Wheeler said.

“One of the positive things we can do in determining the impact is Friends of Mill Creek has well over 15 years of data on the creek such as water flows, fish population and temperatures,” McKay said.  “We’ve let the ministry know we are willing to provide that data and information as a baseline once they can get in to begin monitoring.

Province officials didn’t know when the cleanup would finish.

“I can confirm that the cleanup and remediation efforts are ongoing,” Wheeler said.

One thought on “Ontario fuel spill could threaten Lake Erie”