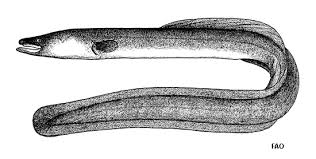 A proposed aquaculture project could make Michigan the first state to commercially raise African longfin eel, a species native to the Western Indian Ocean and a popular food in Japan, China and South Korea.

A preliminary inquiry to the state Department of Agriculture and Rural Development has sparked concern about the possibility that the eels, a migratory species, could escape from the proposed facility in St. Johns, north of Lansing, into inland lakes.

As a result, scientists at the Michigan Department of Natural Resources (DNR) and U.S. Fish & Wildlife Service have developed a new system to assess risks posed by introduction of the African longfin eel to the Great Lakes region. The evaluation system could also be used the assess risks for other species that have not yet been approved for aquaculture in Michigan.

Although freshwater eels are raised in Europe and Asia, Michigan would be the first state with commercial eel aquaculture if the project from Aqua Vida Aquaculture, based in Florida, comes to fruition.

There’s no comprehensive database of U.S. aquaculture facilities, and each state has its own regulations and laws for them, said Paul Zajicek, the executive director of the National Aquaculture Association. He said he’s unaware of any facilities that raise African longfin eels in the United States.

There’s reason for concern, according to the study published in the journal Management of Biological Invasions, because “aquaculture has increased in importance as a pathway for introduction of aquatic species outside their native ranges. At present, aquaculture is responsible for more international introductions of inland aquatic species than any other cause.”

Among the worries: the eels might carry “alien parasites and diseases” that could infect other species, including the American eel that’s on the International Union for the Conservation of Nature’s Red List of endangered species, the study said.

The facility would import wild-caught juvenile eels – elvers – and raise them to market size in about 18 months, according to Kit Munday, Aqua Vide’s founder and managing partner.

The company website says the African longfin eel “is the last remaining temperate eel species with a pristine and unexploited wild population. The sustainable harvest of this species offers considerable opportunity.”

Munday said there’s no risk of the eels escaping or spreading pathogens, including the fact that the facility would recirculate rather than discharge all the water it uses. Pathogens are bacteria, viruses or other disease-causing microorganisms.

“There’s a long history of farming this species. Escapees have never been an issue before,” he said. As for the spread of diseases, he said the facility would be bio-secure to prevent pathogens “getting in from the outside world, whether from nearby farmlands and nearby cities” and to prevent pathogens from getting out.

And if eels were somehow to get out, they couldn’t breed and would die in Michigan’s cold waters, he said. Nor is there a danger of them becoming invasive because ‘if you can’t breed, you can’t become an invasive species.”

“This is using all the available science and expert opinion to help make management decisions,” said DNR fisheries biologist Seth Herbst, one of the authors of the study. “Our main goal is protecting and conserving Michigan’s natural resources.”

According to the study, the outside experts “generally agreed on high probabilities of frequent human and non-human transport” of the eels, given their migratory nature, a history of eels escaping from aquaculture facilities and their ability to survive in poor-quality water.

Nearly all the experts expressed concern about potential introduction of a parasitic worm.

They agreed that the African longfin eel is harmless in terms of toxins and were nearly unanimous that a potential invasion wouldn’t disturb existing fish habitat, according to the study.

All the experts, however, “predicted some effect from predation on native organisms, but not necessarily significant harm” if the eels were to escape, the study said.

The experts concluded that it’s more likely than not that African longfin eels would be invasive if released into the wild “because of the parasite issue,” Herbst said.

Herbst said, “The pathogen risk was the most significant risk,” but if it’s possible to mitigate those risks, the facility could benefit the state economically.

“When you have fully closed systems, recirculating systems with filtration and wastewater treatment, they typically come with very low risk,” he said. He also noted that the proposed site at a St. Johns industrial park isn’t in a major floodplain or close to a major river system that connects to the Great Lakes.

The state has 49 registered aquaculture facilities, but the owners of only about 25 percent of them “are making a living at it,” according to Dan Vogler, the president of the Michigan Aquaculture Association.

Vogler questioned the viability of the proposal, saying, “There’s a lot of experimentation and enthusiasm for new species” to raise, but “in some ways that desire to do a new species all the time can be problematic if we haven’t closed the loop on the lifestyle of species.”

As an example, he compared rainbow trout which have been raised for 150 years “where we are able to do the entire life cycle under controlled circumstances” with yellow perch, where “we’re still struggling to close that life cycle, and most efforts to raise yellow perch for market have failed.”

Vogler also cited difficulties with recirculating systems, which he said have had “very limited success nationwide” in raising fish to food size.

Munday said Aqua Vida is “in the hopefully last throes of fundraising, and we hope to begin construction this year.”

Stephen Hussey, the Agriculture and Rural Development’s aquaculture and poultry program manager, said his department, DNR and the Michigan Department of Environmental Quality have been working with Aqua Vide on planning for compliance with state requirements.

“We’ve been reviewing this project for over two years now” to test possible requirements and protect against the release of pathogens, he said. The company will need a variety of state permits, culminating with a research permit that is necessary to operate an aquaculture facility for species that aren’t among 75 state-approved fish species such as brown trout, walleye, yellow perch and sturgeon.”

Hussey said state experts would make site visits to the facility three times during construction and then conduct a final pre-licensing inspection before it can operate commercially.