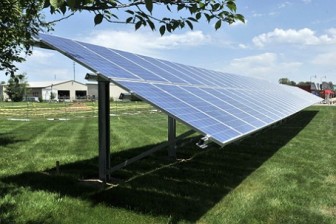 Farming and land preservation tax breaks for solar energy don’t mix, according to the Michigan Department of Agriculture.

Michigan farmers who lease land for solar farming are no longer eligible for tax credits under the state’s Open Space Preservation Program.

The state started the program in 1975 to preserve farmland. Farmers must sign a minimum 10-year contract agreeing that the land will be used only for farming. In return, they receive income tax benefits and exemptions from certain assessments, said Richard Harlow, the program’s manager.

Michigan has 3.3 million acres of land enrolled in the program and has issued over a billion dollars in tax credits to farmers since it started, Harlow said.

The state agency in 2017 ruled that solar farming is incompatible with agriculture.

Despite the ruling, solar companies have been actively seeking out solar contracts with farmers this year. That is due to a policy change by the Michigan Public Service Commission that makes solar projects more profitable combined with a drop in price of solar modules, inverters and wiring, said Charles Gould, a Michigan State University Extension educator on renewable energy and conservation.

“It is a perfect storm for solar panel projects,” Gould said.

The ruling means that farmers must choose between leasing part of their land to solar companies for solar farming or receiving tax credits for land preservation.

The panels are put on the least productive land where it is difficult to grow crops anyway, he said. And at the end of the lease, the panels can be removed and the land can be returned to farming.

Gould agrees that farmers could still keep their land agricultural while participating in solar contracts. “It just takes thinking outside of the box,” he said.

Amos recently got out of the land preservation program to sign with a solar company and install panels on his 1600-acre farm.

“Solar farming helps farmers keep their farms,” he said. And unlike crops, they require no capital input or constant maintenance.

“It is a much more profitable and reliable way to generate farm income, and it helps the long-term production,” he said.

Farmers in the farmland preservation program who choose to go the solar route must gain approval from the state to leave the program and go through a rezoning process to be considered industrial land.

Getting out is not easy.

“It is difficult to get out and intentionally so,” Harlow said. Farmers cannot opt out simply because they want to. Eligibility for removal consists of death and disability of the landowner.

Farmers essentially have to buy their way out of the program, but many are not able or do not know how, Amos said.  While the program was designed to benefit farmers, it now unfairly hinders them with strict regulations and unsubstantial benefits, he said.

Once they are out of the program, they are required to repay the state the last seven years of tax credits earned from it.

The way that the state is now interpreting the program fails to look at the bigger picture of keeping farmers in business, Amos said. “It is outdated, they should just dissolve it.”