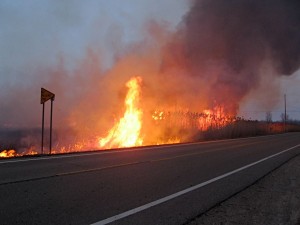 When life gives you lemons, you make lemonade.

That’s the outlook First Nations people of Walpole Island are taking on phragmites australis, an invasive plant that crowds out native ones in Great Lakes wetlands.

The plant has been the subject of intensive eradication efforts. But rather than get rid of it, elders within the community suggested a new approach, said Clint Jacobs, the natural heritage coordinator for Walpole Island, Ontario.

They think the plant is here to teach us something, Jacobs said.

“We did do some herbicide application to some pilot sites but they’d come back within three or four years,” Jacobs said.

The people of Walpole Island have since tried to find new ways to use the phragmites to benefit their society.

They are looking at whether phragmites decontaminates the water flowing from the industries north of Walpole Island, Jacobs said.

The water flowing past Walpole Island first comes through Sarnia, a region known as Chemical Valley because of the petroleum-based industries there. A study by the Walpole Island Heritage Center found that water pollution on Walpole Island is the primary human health concern.

The Walpole Island perspective on invasive species is consistent with a recent study by Nicholas J. Reo and Laura A. Ogden and published in the Sustainability Science Journal.

Not all indigenous communities have the same ideals, the study said. However, they all have a common relationship with non-human members of their communities.

It is a priority to indigenous people to form a human-plant relationship with new plants in their territory, reports the study in Sustainability Science. They also try to discover the potential gift the new plant offers their community.

At the Walpole Island fall fair, community members were asked to come up with creative and practical uses for phragmites, Jacobs said. Some of the ideas included turning the invasive species into practical items such as brooms and picture frames.

Long term uses suggested for phragmites include insulation for buildings and as a heating source in homes, Jacobs said. These plans have not been thoroughly researched or implemented.

“If we had the funding availability and somebody to lead on that, we would definitely pursue it,” Jacobs said.

Some of the wildlife in the Walpole Island community have figured it out. Muskrats are using the phragmites as a habitat, Jacobs said.

The people of Walpole Island are not the only ones trying to figure out a positive use for phragmites. One study by Gregory Zimmerman, a professor at Lake Superior State University, and another study have also come up with solutions other than the use of herbicides and prescribed fires to kill the plant.

The study says phragmites can be used as pellets to heat homes.

Zimmerman is also exploring the creation of such bioenergy from reed canary grass and miscanthus.

The benefits to harvesting invasive weeds include conserving soil nutrients. And the process releases less carbon as a gas that warms the atmosphere. A stalk of phragmites can produce uniform pellets that can be burned to warm homes, according to the Great to the study by Zimmerman.

The other study discusses how to harvest and use invasive plants.

“We aim to restore thousands of acres of Great Lakes wetlands impacted by invasive plants, and re-purpose biomass for low-carbon green energy, compost and soil amendments,” it reported.

Editors note: This story was updated 11/16/18 to clearly indicate the source of research.

One thought on “Phrag fight: is it friend or foe?”